‘Please try to remember that what they believe, as well as what they do and cause you to endure does not testify to your inferiority but to their inhumanity.’

‘Whatever your ear has not heard, hear that
What your eyes have not seen, see that.’

Does writing matter? This is the question that Richard Flanagan posed in his blistering address for the inaugural Boisbouvier Lecture at the 2016 Melbourne Writers Festival. Flanagan frames this question with a searing and devastating critique of Australia’s refugee policy: ‘their names and their stories are kept from us. They live in a zoo of cruelty. Their lives are stripped of meaning.’ In the face of such unashamed state-sanctioned violence, in the knowledge of the repeated violations of the UN Charter for Human Rights, what then can writing, or any art form for that matter, actually offer?

For Flanagan, art can give us a rare thing indeed: ‘it matters more than ever that we have ways of reconciling the experience of our lives with that of the larger world – a world in which we find false words are routinely used by power to deceive, dissemble and disempower. It matters that there might be a society where some are allowed the possibility of questioning, of not agreeing, of saying no, of proposing other worlds, of showing other lives.’

The Invisible at UTS Gallery, features the work of Khadim Ali, Elyas Alavi, Avan Anwar, Rushdi Anwar and Abdul Karim Hekmat. It is an exhibition curated by a refugee, showing only the work of artists who are refugees. ‘There was no clear plan as to who should be included in the exhibition at the beginning,’ writes curator and artist Abdul Karim Hekmat, ‘what has brought us together is our collective pain, trauma, suffering and aspiration.’ The result is an urgent and necessary portrait of the experience of displacement. 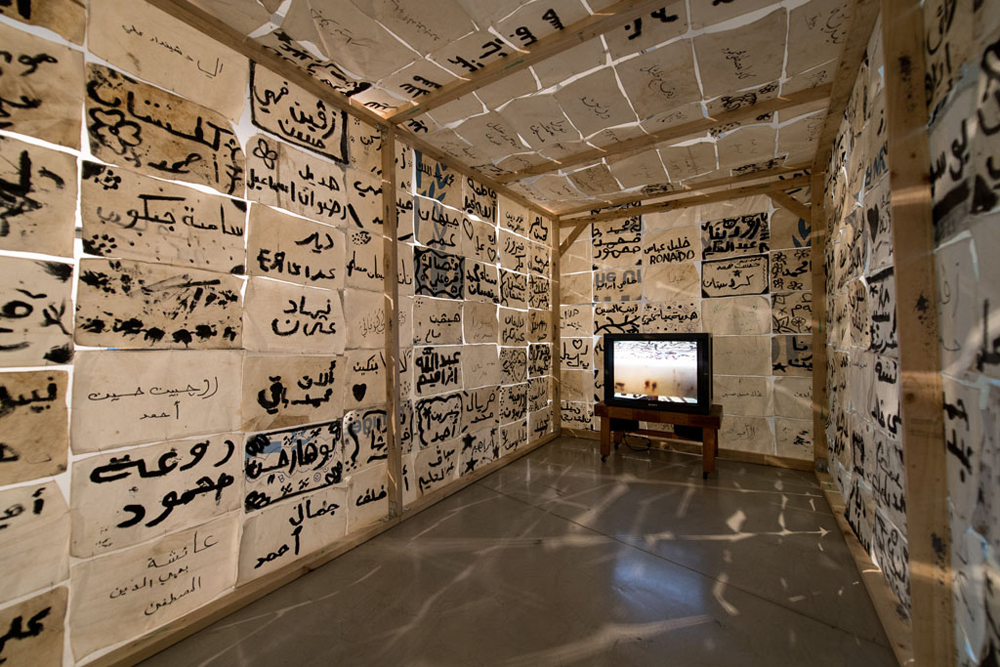 Rushdi Anwar’s work ‘The notion of place and displacement’ (2017) sees the names of school-aged children inscribed on the fabric of a standard issue UNHCR tent. Having fled from IS, these children now live in refugee camps in Kurdistan/Iraq. The video inside the tent shows children carefully painting their own name onto the fabric, some adding dots, flowers and stars. One has painted a thick black heart; another has written ‘Ronado’ in all capital letters. This act of naming refuses generalization, but also allows for a moment of joy: these children are no longer faceless nor are they defined by their victimhood.

When visiting Kabul in 2016, the artist Elyas Alavi was caught in a bomb blast that killed 90 Hazara protestors and injured 300 others. His work bears witness to those who died, with ‘Fading Faces’ (2017) comprised of a series of delicate portraits on glass, and those who still live – the videowork ‘Mohammad Jan’ (2017) allows a mother and father to speak of their grief, to try and make sense of the needless suffering.

On the opposite wall, Hekmat’s three-channel videowork ‘Nauru Refugee Voices’ (2017) plays the testimonies of those who still remain in offshore detention. In giving light to these stories that are so often erased or censored, Hekmat gives agency to each speaker, wrestling control of a narrative that is rightfully theirs.

We aren’t able to see their faces; we can only listen to the idle acts of cruelty, the confusion, the frustration of waiting without end. ‘Get me freedom’, repeats Ajez, an asylum seeker who has been imprisoned on Nauru for the past four years, ‘get me freedom from this pain.’ 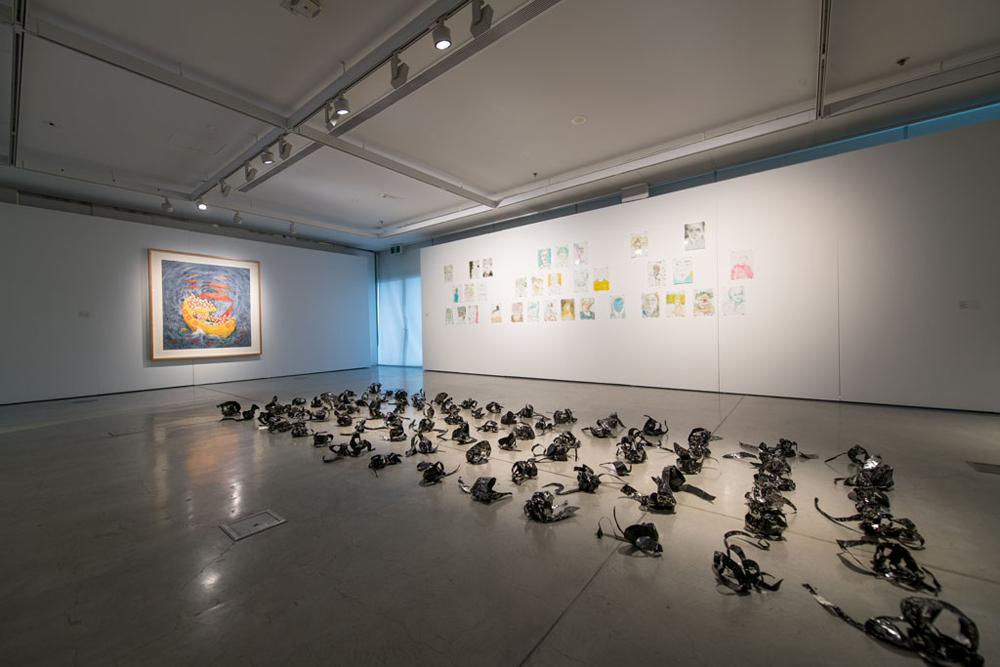 Susan Sontag writes in Regarding the pain of others (2003) that repetitive viewing of images of war and violence only anaesthetizes their power. All of the works in The Invisible have the opposite effect. They incite empathy, compassion and care, challenging the dominant attitudes of hostility, ignorance, and worst of all, apathy and indifference. This is not enough. But addressing this fact is not the responsibility of these artists or this exhibition. They have been generous enough in unpicking old wounds.

There is a moment in Alavi’s ‘Mohammad Jan’ where a mother questions the doctor who mocks her in her grief, forcing her to come and recover the body of her fourteen year old son: ‘they are human bodies, not animal bodies, have some sympathy. One day you will die too, you may suffer even more.’

We are compelled to think of this accusation when we see refugees continually stripped of their dignity and humanity. We must think of it when basic human rights and justice are denied for those housed in detention on Manus and Nauru, when lives are subject to the whims of political expediency. But most importantly, we must level this charge at ourselves, because, as Flanagan argues, ‘these things belong to us, are us, and we are diminished because of them.’

‘One is responsible for life,’ writes James Baldwin, ‘it is the small beacon in that terrifying darkness from which we come and to which we shall return.’