In 1531, the Nahua Juan Diego was rushing through the Tepeyac Hill of colonial Mexico to attend his uncle’s deathbed when a celestial vision emerged from the miasma: la Virgen de Guadalupe (Our Lady of Guadalupe). Juan Diego felt frightened by the sight of this powerful divinity, and promptly explained the nature of his uncle’s aliment. The Virgin magnanimously reassured Juan Diego that his uncle would heal, exclaiming ¿No estoy aquí que soy tu Madre? (Am I not here, I who am your mother?). Then she ordered him to collect flowers from the hill, carry them in his cloak, and present them to a skeptic bishop. When Juan Diego opened his cloak in front of the bishop, the Virgin’s cosmic image was miraculously printed on the inside of the fabric to prove her apparition.

This Catholic myth belongs to Nican Mopohua or Here It is Told (1649), a Nahuatl document of contentious authorship that also narrates Saint Diego’s uncle’s marvellous recovery. He was, in fact, one of the eight million victims of a ravenous smallpox outbreak that depredated the original inhabitants of Mexico in 1531—the same year of the Virgin’s apparition. This backdrop of mass death suggests that the iconic Guadalupe image—held in La Basilica de Guadalupe where it defecates Mexico’s national identity with semiotic excess—is a signpost for solace in times of mega-death. Words followed the image in this trail of destruction, like a troubadour crossing kingdoms sickened by The Great Mortality. Indeed, Nican Mopohua shows us the influence of an enormous epidemic on this religious hallucination, and the eternal perseverance of art (the Guadalupe image is attributed to divine sources, but secularly we know its origin is a human painter).

Passages such as this gain a new meaning today, as the COVID-19 pandemic shuts down the arts. It is fitting that a respiratory illness is leaving us breathless, gasping for air, just as exorbitant government measures suffocate our civil liberties. The art world seems to have caught the black death like a victim in the plague novella The Decameron (1353). Due to social distancing measures and radical funding cuts, spaces that were once buoyant have now inadvertently collapsed, aggravating the extreme precariousness of the arts ecology. In Narrm Melbourne, the casualties range from mild to severe: Next Wave is opting to present their festival online, while CCP has made their curatorial staff redundant, and countless other organisations appear on the Australia Council list of unsuccessful applicants.

White cubes are collectively uploading content to the Internet as the notion of art as a physical space comes into crisis. Nevertheless, like the iconic Virgen de Guadalupe, art continues to emerge from the tenebra of self-isolation to infiltrate the incandescence of the screen. Writing also perseveres, as the lust of the word for the image multiplies in disaster—only making its exhibitionism for the reader more arousing, and sickeningly dangerous. 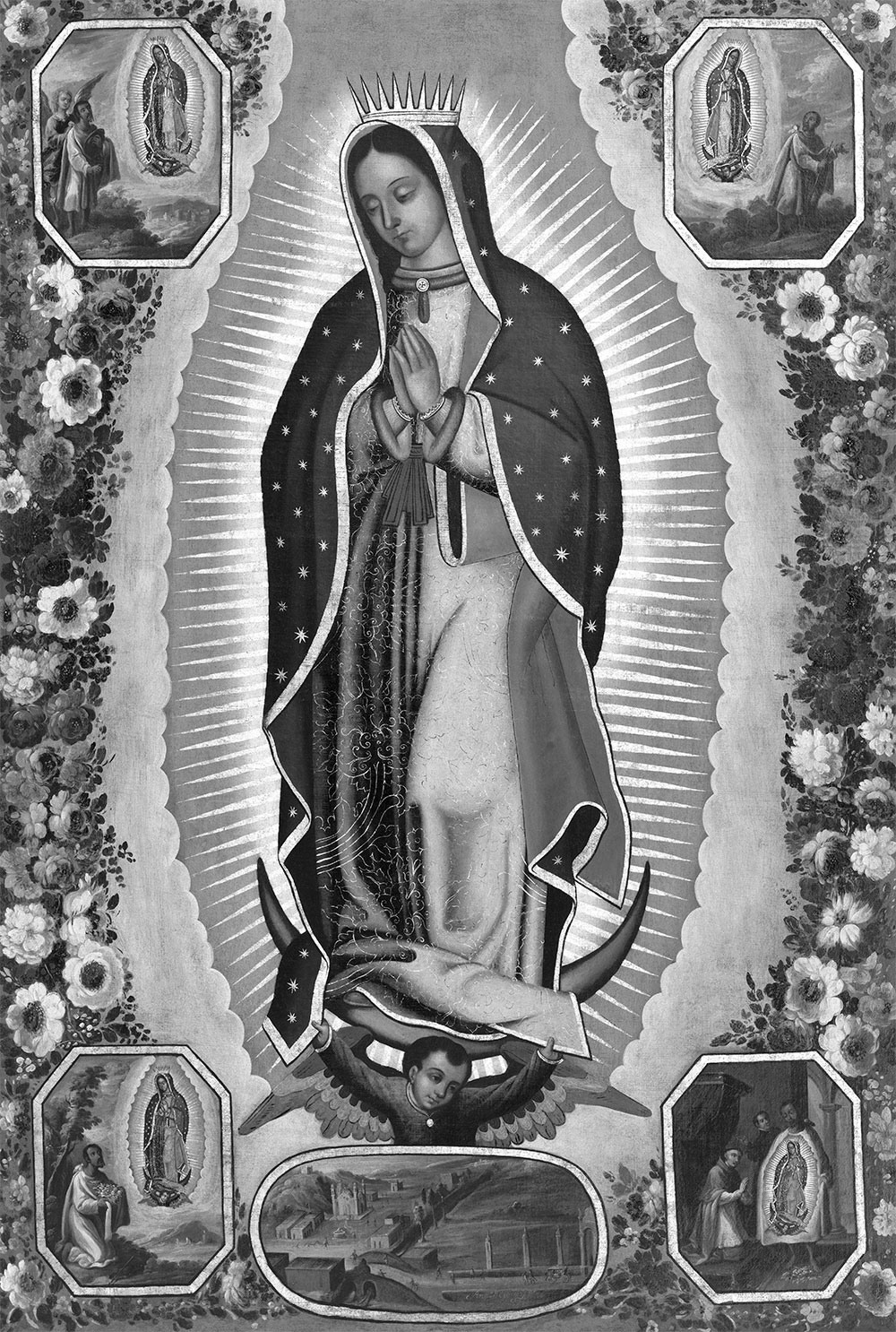 In 1576, word and image again merged with vicious debauchery as a great pestilence returned with horrid voracity to Tlatelolco, in what is known today as Mexico City. This is where Spanish friar Bernardino de Sahagún and several Nahua collaborators settled to draft the colonial manuscript known as the Florentine Codex.1 Originally titled La Historia general de las Cosas de Nueva España, it features 1,200 pages in Spanish and Nahuatl, as well as 2,468 illustrations documenting indigenous societies. They were writing during one of the many fatal epidemics that erupted since the Spanish conquest in 1521, decimating most of Mexico’s original inhabitants in a vortex of foul, biological warfare. These fetid outbreaks are collectively known as ‘cocoliztli’, meaning pest.2 This Nahuatl term also shares an eerie resemblance with the name given to the Hispanic bogeyman: El Coco. Some of the symptoms of this centrifugal malady included a black tongue, bleeding from the ears and delirium. In the abject scene of these body horrors, it is remarkable how both colonised and coloniser continued writing the Florentine Codex.

This event shows how the act of documenting, decoding, and reinterpreting cultural practices is essential, even though gathering is dispensable. The art world may crawl like a black-tongued zombie contaminated with restrictions, but art and criticism mutates rather than perishes. Unfortunately, most contemporary spaces have responded to the COVID-19 crisis by setting up ‘virtual rooms’ in Google Arts & Culture that show glorified installation photographs via our computer screen. This is an awkward substitute for reality, bearing the same flatulence of a bean burrito appeasing the capricious hunger of a gentrified suburb. Rather than forcing artworks (installations, sculpture, painting) to fit in virtual spaces where they don’t belong, it could be more prosperous to focus on media that is preternaturally able to inhabit newsletters, Instagram stories, and purpose-built websites. Initiatives such as Vdrome, You Are The Prototype and Recess were already successfully distributing video art in their newsletters prior to this virulent pandemonium.

Art video games have an even greater potential to mobilise the voiding catatonia of pandemia as they offer interactivity while speaking to the sensibilities of shut-in culture (which often includes manic video gaming). High profile artists who could easily be gathered in an interactive online exhibition of this sort include Feng Mengbo, Cory Arcangel, Lu Yang, Angela Washko and Jason Rohrer. Experimental advocacy, psychotropic accounting and radical entrepreneurship can also proliferate as an artistic practice during the recession ahead of us as we seek to revitalise the industry. The unimaginable may occur as artists and writers adapt to these new challenges, spiralling chaotically into new directions.

As methods of transmission mutate with abominable speed, artists can indeed profit from shifting their mediums and modes of display to work outside the decaying walls of the white cube—like Juan Diego, who conjured the divine to manifest a portrait in his cloak. On the other hand, practitioners may rejoice in the stillness of this moment and let ideas, fantasies, hallucinations, and nightmares flourish without the pressures of an exhibition outcome.

This could also be the time to abandon art altogether and begin a monastic life in regional Australia where Albert Camus’ The Plague (1947) resurfaces as soft pornography for intellectuals in hiatus. Or work on lengthy manuscripts, like Spanish friar Bernardino de Sahagún. Either way, the death of the gallery as a cultural structure—an entity that has overextended its life like the abominable undead—may be upon us. We look at the past like plagued rats escaping a medieval ship to understand how the present is caught in flames, and it seems we are not the first ones to struggle.

If an oracle were to exist, it would surely foresee extreme precariousness, home exhibitions, new modes of making, chaotic writing and a severe backlash that will see us returning to social practice, radical intimacy, community building, and pigeon post. The future is morose yet thrilling, like a toxic relationship leading to self-annihilation. Words and images will persevere while we crumble under unpaid wages and mysterious ailments. This may be an uncivil attempt at optimism but faith is delusional since times immemorial. Let us grieve the present, and celebrate the future.