This text is in dialogue with Helen Johnson’s Warm Ties (Artspace). The exhibition, comprising six paintings, critically reimagines scenes of settlement and its afterlife in Australia. Major and minor histories are layered on large-scale canvases – theatrical backgrounds that make the viewer a player.

The figurative finger or index of epistemic anxiety. One finger traffics gossip, a ‘privy cypher’ moving against the grain. The finger that feels the shape and texture of a line. Law moves in the illegal gestures of the colonist, cop, squatter, or sailor. One finger traces the map, naming places as if listing mates. One finger runs under a word, emphasising it as a fact. Hands are contracts as they shake and describe, slap together. One hand is slipped through the suit coat in an act of self-comfort. One hand is masturbating in patriotic ecstasy. One hand raps a gavel in judgement while the other reaches out in desperation. A hand makes a simple tool for snagging and dragging sandals. Gloved hands point and wave in pantomime. Bare hands penetrate the surface, consuming the scene from the inside out. On the backside of the canvas, a different kind of hand – the fine, considered hand of the artist’s writing – the archive is glimpsed. Clippings, acknowledgements, comic cells, landscape studies.

‘Have guts until the guts / Come through the margins’ (Jack Spicer). Scenes of empire are invariably group shots of men, jostling and cajoling, distracted yet fraternal (fatally so). Imagine that, rather than sweat and ham-hocks, thick oily suits and top hats, pheromones and wax, we saw the men as a network of interiors: deep, mahogany livers and tightly packed colons. Scenes of ingestion and indigestion. Imagine if, rather than the surfaces of men, we saw instead the way the pressure bears downward from the well-stocked colons and expresses itself as farts – in this case more discursive than acoustic, the overlaid and oversignified words of anthems, pledges and creeds. The filthy excretions of empire move multi-directionally into the mouth and out through the arse. Importantly, the men lack guts. We know this already in a metaphorical sense, but here we see it as material fact: the men are full of shit without ever eating a bite! 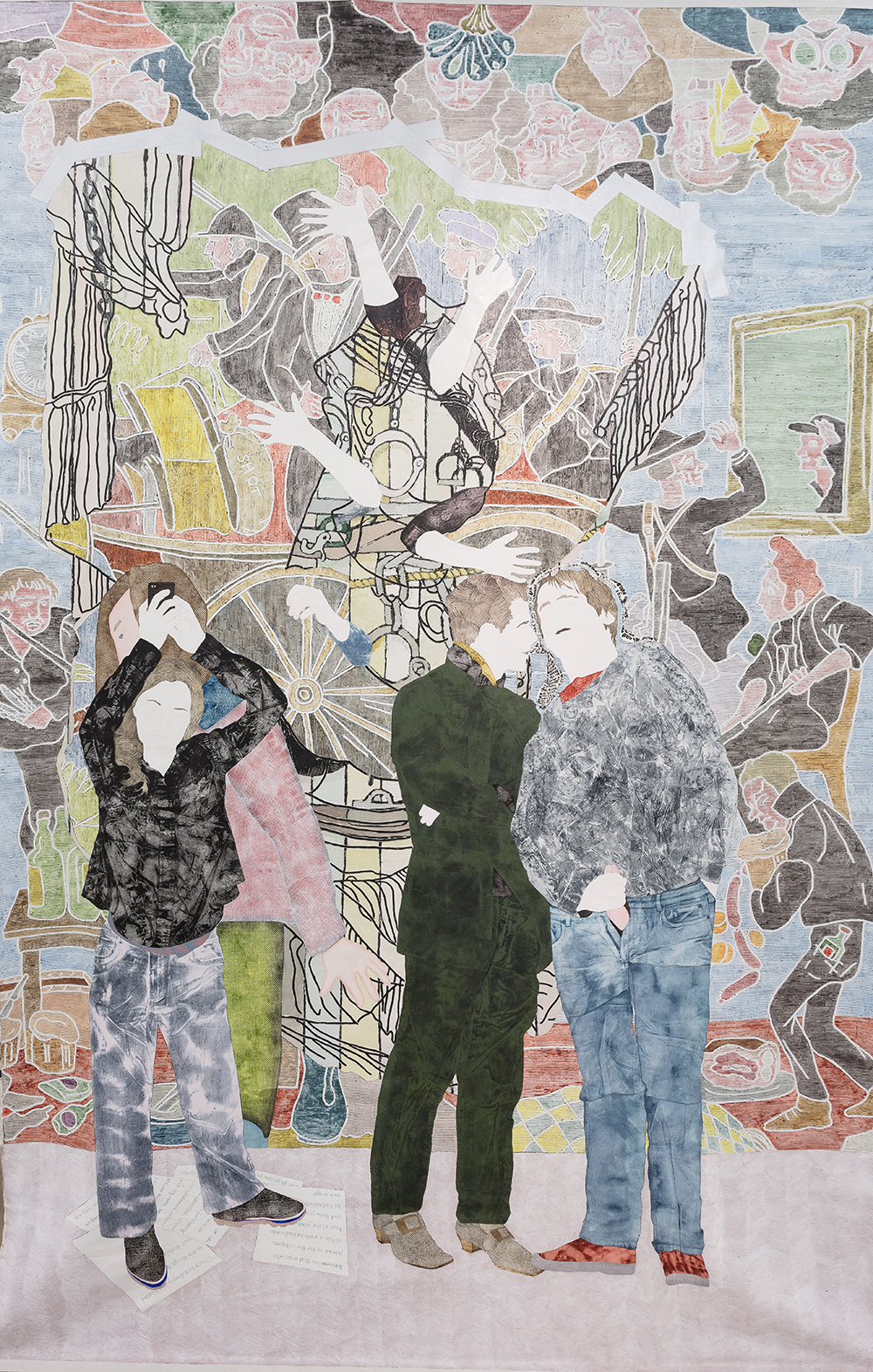 One word is rounded, one sharp. An asshole is a person, and an arsehole a sphincter. An ass is also a donkey. An arse is also a unit or metric: the way bodies and furniture mingle to make crowds, populations, and audiences. Donkeys work hard and drink hard (warm shiraz from a champagne glass). The arse and the chair are easy allies. Counterfeit chairs pop up in the colonies, shoddy throwbacks to the homeland. And so, the chair becomes an indiscreet signifier for the needy width of the settler’s arse. From the nostalgic chair, you can see how breezy the law is, when it appears as mere confirmation of what has been fantasised and then seized. Like a cartoon it clicks forward, ever resolving, speedy and with bent physics.

The voice disconnected from the body sounds a choked declaration that writes the law. From the mouth spews the garbled mutterings of a former cop: “it’s political correctness gone mad” or “don’t bring these sorts of views into the minds of young kids.” Rotten words discharged from rotting organs. In another scene, the smacking of lips indexes the insatiable appetite of men. Cigars are lit, glasses are charged — the opulent violence of the settler feast is illuminated in all its stark, embossed whiteness. The mouth, a wet threshold, both holds and expels the world. A mouth’s body is one long sock-like pocket, an afterburner. Speech, a central activity, sometimes simply mirrors the mouth as it opens, signalling the act as a message in itself. Open wide and make room in the mouth. A parasite configures the archive anew.

Pelts, furs, skins; the fine thread of wool or silk; rotten flax blankets; the pestilent wigs of court or commerce; the ferrety, oily bush of the settler’s beard, whiskers bent up like antennae. Hair grows down the body, in soft houndstooth patches. Or hair grows up the body, padding for corduroy or velvet. Rabbits pile up, foxes and kittens fit neat together. Layered with dandelion, the animals make a smooth, interspecies lasagna. Flour, lard, the popping candy of weevils. Hessian of a fake swagman’s chaps. Thick robe-like pants. Duck feathers make a coward’s quilt, the settler’s feeble attempt at insulation. History peels, revealing a coat of an animal on the body of a man, who, two fat fingers in his hair, leans indecently into the sweat of the bay. The sheer physical and temporal scale of it – thick braids swelling and spoiling in what seems an instant but must, by all accounts, be centuries.