This text is part one in Running Dog’s series covering the Mardi Gras Visual Arts Program. Written in the style of a closet drama, it considers Isaac Julien’s ‘Looking for Langston’ and Ben Mercer & Tom Pender’s ‘The Story of the Girls’.

THE BELOVED is stoned, stretched out on the floor in the bodyline of gay history. Posing statue-still in his recline, his only movement is the flickering of his thumb on a half-hearted Grindr cruise. CHER sings on a Smart TV in front of him.

Do you believe in life after love?

THE LOVER (AN ART CRITIC) sits behind him, watching the microdrama of his libido play out and thinking about the cinema of it: HER watching HIM looking for MEN just as Cher is sing-realising that ‘love’ is an event, an era, a bookmark: something to recover from and something you can never return to not having felt.

AN ART CRITIC (THE LOVER) waits for THE BELOVED to arrive. He texts saying he might be late but the doors to Isaac Julien’s Looking for Langston shut at 7.15pm sharp.

THE CAMERA WAITS BEHIND TWO SEATS IN THE THEATRE FOR TEN MINUTES, SHIFTING IN AND OUT OF FOCUS TO THE SOUND OF PEOPLE TAKING THEIR SEATS, AND –

THE BELOVED arrives just in time, reeking like a man does after he’s just sprinted from a train station. As he folds himself into a seat, he fans his shirt back and forth to aerate his sweat and THE LOVER (AN ART CRITIC) is ashamed to be aroused.

‘Looking for Langston is a lyrical reimagining of the Harlem Renaissance and the life of its poet laureate, Langston Hughes (1902-1967).’ 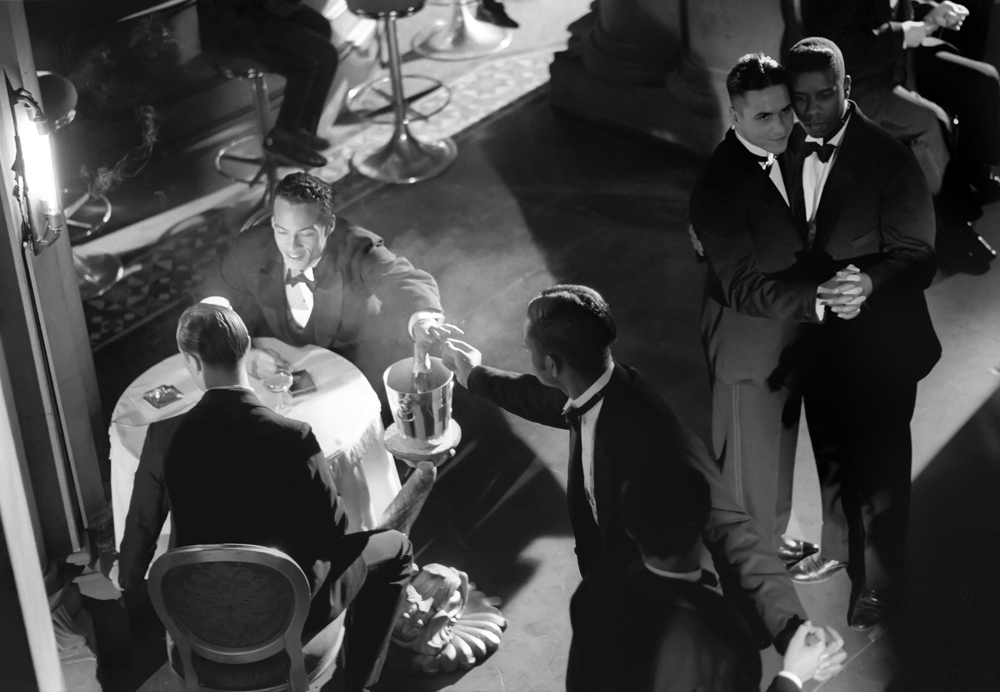 CUT TO – A RECREATION OF LANGSTON HUGHES’ FUNERAL

CUT TO – BLACK MEN LOOKING AT EACH OTHER

The film is a seamless blend of archival and reconstructed scenes.

CUT TO – A RECURRING MOTIF OF SMOKE

It invokes photographic pasts—amongst others, the work of Robert Mapplethorpe—and participates in the critical interventions of the 1980s black British film movement.

CUT TO – BLACK MEN LOOKING FOR EACH OTHER

Julien, alongside members of the pioneering Sankofa Film and Video Collective, sought an ‘aesthetic of reparation’—a cinematic vernacular which explored ‘different ways in which one could redeem how the black subject was represented’.

CUT TO –THE POST-SCREENING Q&A WITH ISAAC JULIEN

ISAAC JULIEN [QUOTE REMEMBERED BY AN ART CRITIC (THE LOVER)]

Every black gay man I knew in London had a copy of [Mapplethorpe’s] The Black Book. It was loved but also read with a certain…criticality. But it was important in developing a visual language.

The process of having an ‘identity’ is the feeling of waking up in someone else’s dream; there’s an unexplained logic that makes this meaningful mess coherent in your brief suspension of disbelief.

CUT BACK TO – THE NIGHT BEFORE MARDI GRAS

THE BELOVED is still stoned, stretched out on the floor in the bodyline of gay history. THE OTHER PEOPLE IN THE ROOM are flicking through the gay canon of pop on the Smart TV. When they ask THE BELOVED to throw out a request, he waves them off. THE LOVER (AN ART CRITIC) squeezes his shoulder.

THE LOVER (AN ART CRITIC)

How about High School Musical 2? I know THE BELOVED likes ‘Fabulous’…

THE BELOVED lights up as the one gay-ish tune he somehow found as a teen starts playing, and THE LOVER’s fears are confirmed: THE BELOVED has spent the last hour or so spectating his own life because he’s not literate in the nostalgia everyone else in the room is enjoying.

I wanted to be her so badly!

THE LOVER (AN ART CRITIC)

You literally are her!

CUT TO – INT. STACKS PROJECTS – EVENING OF AN OPENING A WEEK OR SO BEFORE VALENTINE’S DAY

[In a gallery the size of a closet, white gay males crowd around a linear narrative of Barbies, posed in a runway tableau on an LED-lit plinth.]

‘The Story of The Girls is a high-camp exhibition of artworks resulting from 25 years of creative play between two gay best friends Ben Mercer & Tom Pender.’ 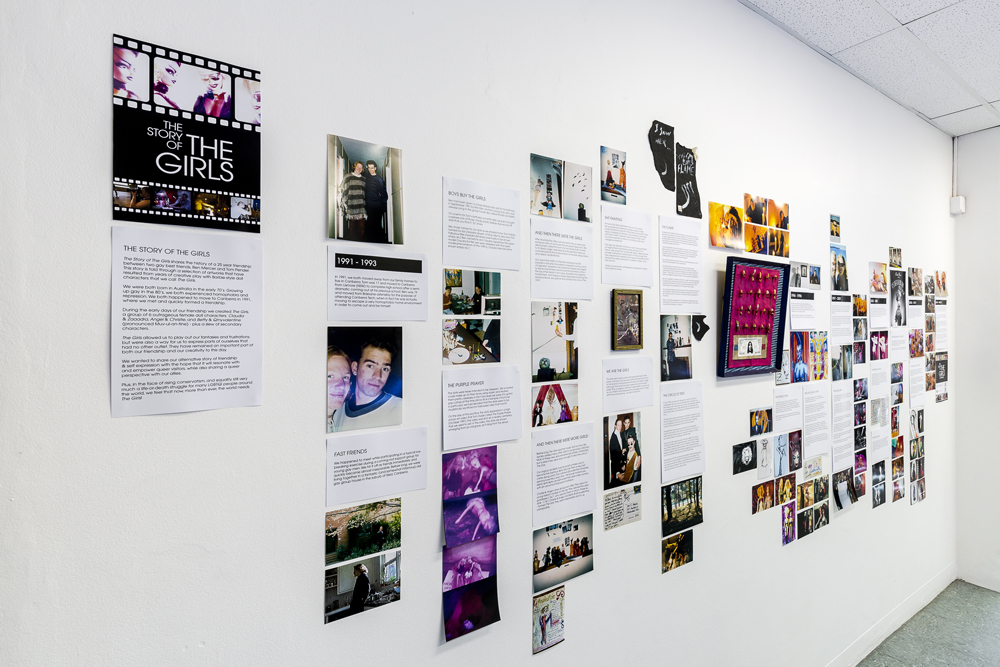 THE CAMERA FOLLOWS OVER THE SHOULDER OF AN ART CRITIC (THE LOVER) AS SHE ANGLES THROUGH A CROWD OF UNFAMILIAR GAYS, TRYING TO READ THE STORY BLU-TACKED ON THE WALLS. AS SHE CRUISES PAST DIY, PERSONAL REPORTAGE OF IDENTITIES MEDIATED THROUGH A FRIENDSHIP MEDIATED THROUGH DOLLS, HER INTERIOR MONOLOGUE RUNS OVER THE FAR RIGHT THIRD OF THE FRAME:

I can’t remember the last time
I saw art that had a social
function outside of the art
world. That’s not to say that
there isn’t art like that
happening all the time, I just
don’t see it. It’s nice to see art
re-producing a community that
isn’t ‘the art scene’.

Maybe I’m going soft now that
I have an eroticised affinity to
white gay men. But instead of
feeling angered or alienated
by this repetitive entry into the
cis-white-GAYtm canon of
Mardi Gras aesthetics, I feel
warm watching the gay gaze
tilt away from a homoeroticism
that desires ‘ideal’ bodies and
towards gay camaraderie that
makes alternative
masculinities.

It’s not that I don’t like hanging out with gay cis-men. There’s an…ellipsis, a possibility, in reading alternative social scripts for masculinity. But to share a language is to realise how unfairly ‘shared’ something can be.

CUT TO – MEN LOOKING AT EACH OTHER

CUT TO – CLOSE UP ON HER WATCHING HIM LOOKING FOR MEN

THE LOVER (AND ART CRITIC)