A digital yellow fish swims slowly across my laptop screen, and some coded bubbles rise from the slightly pixelated coral in the bottom corners. This retro screensaver-style homepage is my first encounter with the online exhibition screensaver watching you, hosted by Off Site Project1 (April 16 – July 19, 2020).

I begin reading the curatorial text, with the fish floating by, when my speakers suddenly blare with a synthesised PING and I nearly jump out of my skin—except it isn’t exactly the sound of a PING. I can’t quite put my finger on what it is. It’s recognisable as a computer noise, but unidentifiable, oddly elusive. A little later, while navigating my way through the seven artworks of the exhibition via the glitchy icons at the bottom of the screen, the clicky-thumps of a keyboard start resounding from my laptop, causing my heart rate to spike all over again. The sounds are discomforting, uncanny, and unpredictable. It feels like they are coming from my computer rather than the exhibition, like there is a ghost inside of my machine. Of course, all of this is deliberate, but why do the curators want to spook me?

If we look to the history of magic and ghost stories, it becomes clearer why screensaver watching you encourages us to view our devices as haunted—and why such stories are a significant lens through which to examine our attitudes towards the ever-connected and omnipresent tech we live with/on. For centuries, tales about the supernatural—especially ghost stories—have been leveraged both as the means for enforcing social norms and as a method of transcending oppression.

Throughout the Enlightenment, ghosts were used to strengthen social constructs and shape behaviour. In Invisible: The Dangers of the Unseen (2014), Philip Ball argues that ghosts in the 17th and 18th centuries were ‘social conservatives’ who ‘sanctioned proper conduct by ensuring that the dead were revered and by threatening horrible retribution for our sins. They [were] the invisible police, all-seeing agents that patrolled our norms and boundaries.’ He cites Dickens’ ghosts in A Christmas Carol (1843), who each show Scrooge the errors of his ways.2 Here, the ghost acts as a moralisor and a didactic teacher.

In the mid-19th century, there was a shift in the function of ghost stories. Women in Victorian England began using these narratives as a means to gain a voice, to communicate frustrations, and to claim agency. Many of the female authors working in this genre were also active supporters of the female suffrage movement, and used the figure of the ghost to say what was unspeakable in everyday life.3 As literary critic Hephzibah Anderson states, ‘the ghosts become proto-feminist figures who—in death at least—cast off the traditional roles that society foists upon them, those of obedient wife, doting mother, dutiful daughter.’4 Through such characters, authors were able to depict women in new, nuanced and liberated roles, developing the complexity of female characters in popular culture.

Given the social power of this genre, the question of who is telling ghost stories today, and why, becomes fraught with politics and underlying motivations. It has to be said that the dominant authors of ghost stories around tech are the companies themselves. They sell their products as witchcraft. ‘We have invented a new technology called multi-touch, which is phenomenal. It works like magic,’ said Steve Jobs in 2007.5 Yet Natalie Kane and Tobias Revell, founders of the curatorial project Haunted Machines, argue that we should be thinking of these products as haunted rather than magical. ‘The intention of that [metaphor of ‘magic’], whether explicit or not,’ write Kane and Revell, ‘is to obscure the technical and often financial and legal reality of the system by covering it up with those terms.’6 In other words, if we do not know how our machines operate, we have no power or potential to intervene with them. We are at the mercy of ghosts and ghouls that we cannot control or reason with. Elliott Burns and Pita Arreola-Burns, the founders of Off Site Project and curators of screensaver watching you, also highlight this lack of power and suggest this is a result of a ‘digital architecture where malice is baked into the brickwork.’

These metaphors of magic and ghostliness also make us complacent about the machines that haunt us. Thinking about this more closely, I realise that I’ve become completely accustomed to stories about tech monitoring me, and the lived reality of it—I’m aware that my inbuilt webcam can be hacked and that someone or something can watch me through it; I’m aware that when I visit my Auntie’s house, Alexa is always listening; I’m aware that, as a Londoner, I’m photographed over 300 times every day while moving through the streets of my chosen city.7 I’m aware, but not too alarmed. In any case, there isn’t a lot I can do about it, apart from putting some masking tape over my laptop’s camera.

Such a lack of agency is central to Sarah Friend’s game/artwork Never Ending Snake (2018). It takes the game of Snake that was popularised by Nokia in the late ‘90s/early 2000s and tweaks it so that the snake can never die: ‘Doomed to perpetually feed upon apples, the snake is eventually trapped in a permanent blackness made from its engorged tail.’ When I first played the game, it took me quite some time to realise I could not die, busy as I was avoiding hitting my snake into itself. As soon as I understood that there was no consequence to my actions, the game became mundane and I abandoned it. By creating a ghostly snake that traps you in an inescapable fate, Friend demonstrates how our technology—from the simple games we play, right through to the algorithms that feed our social media accounts and survey us in the streets—are designed. They are not magic. There is someone behind them and some motive driving them. They want us to feel and respond in a certain way. Like a ghost who jumps out and shouts ‘boo’ to intentionally scare us, so too do our devices understand and manipulate our feelings.

The sea stayed calm for 180 miles (2017), a video artwork by Tamara Kamentani, explores another aspect of ghostliness in technology—the ability to traverse states of invisibility and visibility and the power this unpredictability gives. The video shows a screen recording that the artist made on Google Earth’s real-time viewing software of the journey across the section of the Mediterranean sea between Libya and Lampedusa. The recording shows peaceful, undulating waves in soothing tones of greens and blues, and such tricks of invisibility and illusion almost go unnoticed. But what is sold by Google as ‘real-time’ footage is actually an animated render made by AI—this is because Google Earth cannot bear the data-load of real-time recordings of the entire planet and therefore, bodies of water are mimicked in code. What this AI render belies is the violent reality of this strip of ocean: the world’s deadliest migration route that is used by asylum seekers to travel to Europe. Real-time footage of this ocean would show the frequent crimes committed against humanity by people smugglers and governments alike. Real-time footage would show the shocking estimate that 1 in 10 people who travel this route perish on the way. Google makes ghosts out of human lives. 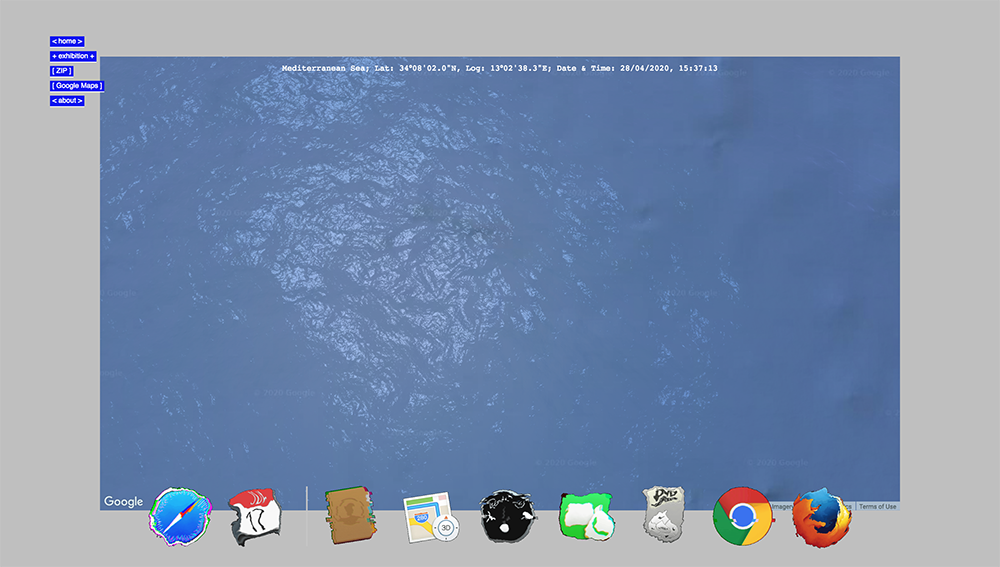 ‘By transforming the sea into a serene image, Google Earth does not only aestheticize it, but it in fact depoliticizes it,’ says Kamentani in her artist statement. Whether intentional or not, the abstracted waves serve as a kind of morality tale typical of Enlightenment ghost stories—do not cross here or you will suffer. This ghost story enforces the 21st century political and capitalist norms where those who make money get to decide who is and isn’t important, what is and isn’t visible, what is and isn’t allowed. The author of the ghost story holds the power.

Countering this 21st century power dynamic of capitalist poltergeists is contemporary literature. According to Parul Sehgal, a literary critic for the New York Times, ‘in the modern ghost story, especially the American kind, something different occurs. Ghosts protest norms—slavery, Jim Crow, mass incarceration—the norms that killed them.’ There is currently a resurgence of authors using ghosts to challenge and subvert oppressive, racist and violent systems.8 Seghal states that ‘ghost stories are never just reflections. They are social critiques camouflaged with cobwebs; the past clamoring for redress.’9 Is it possible to use ghost stories to redress our present as well as our past?

Simon Weckert’s performative work Google Maps Hacks (2020) does just that—utilising the ghost genre and the act of haunting to critique the exploitative, commodifying and invasive surveillance of technology giants. The performance piece (captured on video) sees the artist embodying many ghosts to haunt Google’s software infrastructure. To do this, Weckert wheels a small red wagon with 99 second-hand iPhones through the streets of major cities, causing Google’s tracking systems to detect increased traffic in that area and thereby re-route other ‘real’ traffic based on the false data that Weckert has created. He creates empty spaces on normally busy roads through virtual traffic jams, in the same way a ghost might cause people to run from it, clearing itself a path through which to move. 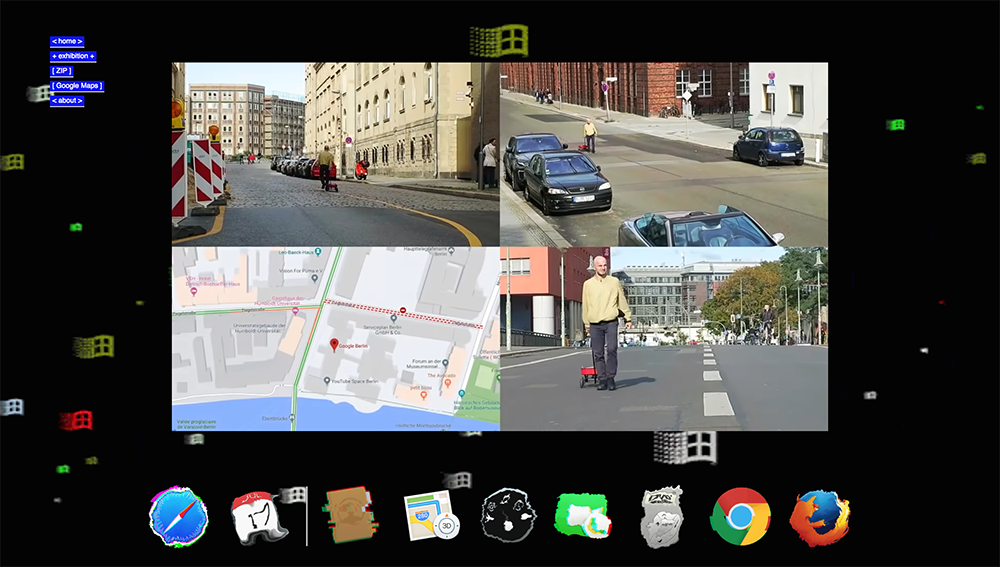 As Seghal suggests, ‘ghosts complicate what might have been straight forward portraits of relationships.’ While Weckert’s performance feels mostly symbolic in that it will not have any true lasting effect on the surveillance systems that are built into Google Maps, the work does bring into question the relationship between passive consumers and the seemingly all-powerful tech companies. It prompts us to consider questions such as: who should and can be creating the ghost stories about our devices? Should ghost stories be used to promote products or question them?

These questions flow throughout the exhibition which simultaneously offers critiques of the creepy, ghostly devices we use while also challenging us to embrace the potential of haunting to subvert the status-quo. Kane calls for ‘a better understanding of our capacity for haunting [which] may, in turn, allow us to better imagine the technological futures we want.’10 In introducing new artists and authors of contemporary ghost-lore, screensaver watching you opens up the creaky door of the haunted house and begins to inhabit it, reclaiming this space from the profit-driven poltergeists that usually reside there. Ultimately, the exhibition asks: should consumers be the hauntees or the haunters? Can we fight ghosts with ghosts to hold these faceless companies and the systems they spawn accountable?