To say that discussions of gender equality were prevalent in 2018 would be a gross understatement. Marches, movements, protests, trials and new accusations brought these conversations to the fore—both locally and internationally—and in the arts as much as in other sectors. As we move into 2019, two Sydney exhibitions are ensuring that these conversations stay firmly in our minds. Borrowed Scenery, at Campbelltown Arts Centre (CAC), delves into the institution’s collection to present fifty-two artworks by female artists. Meanwhile, at Artereal Gallery, Nevertheless, she persisted shows the work of ten unrepresented female and non-binary artists.

Both exhibitions either draw on, or give reference to, the CoUNTess Report: the work of Elvis Richardson (founder), Amy Prcevich and Miranda Samuels. The CoUNTess Report is an online resource that presents information on the gender biases that continue to pervade the Australian contemporary art world.  Drawing together publicly available data from state institutions, commercial galleries, biennales, artist run initiatives, art schools, arts publications and more, the report provides an invaluable record of statistics and figures.

Each of the ‘Countesses’ is an artist themselves. This adds a certain authenticity to their activism—they experience these issues from the inside. It also gives them the freedom to represent, or respond to, the data they gather in a variety of ways. As well as a useful website full of sexy infographics, CoUNTess’ projects have included poster campaigns (reminiscent of the Guerrilla Girls’ tactics), and an impressive list of public appearances in talks and panel discussions.

For the exhibition Borrowed Scenery, Campbelltown Arts Centre commissioned CoUNTess to create an artwork in response to their collection. Titled ‘100% of the artists in Borrowed Scenery are women’ (2019), the work comprises two parts: ‘52 Commas’, an installation of fifty-two brass commas, and ‘We are not consultants’, a paper sheet inserted into the exhibition catalogue, which lists statistics relating to CAC’s levels of gender representation. 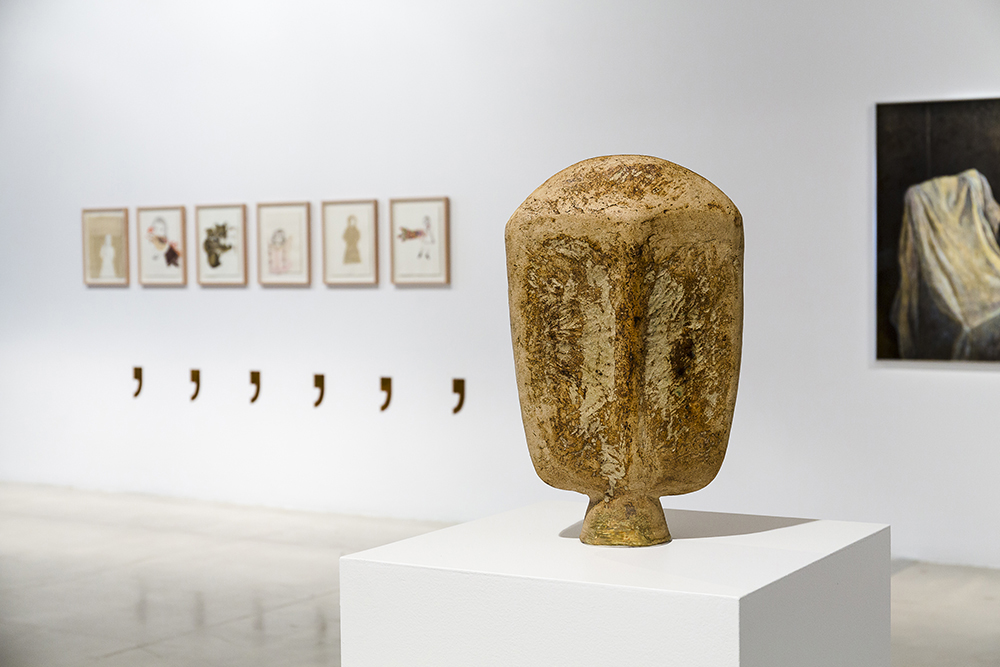 Spaced around the room in between each of the other works, ‘52 Commas’ makes the exhibition feel like a list we are reading in the space. Six commas hover under a series of collages by Joan Ross. In a corner, two commas surround a woven basket by Wilma Walker, suspended mid-air. Bracketed in this way, the work turns into a little utterance of presence, like an exclamation ‘here!’ during roll call. A set of four commas grouped around a painting by Christine Dean adopt the appearance of speech marks, giving more punch to the painting’s assertion—‘there are only two great cities in the world, Campbelltown and Rome.’

I think about what it would be like to have the exhibition space filled only with commas. For me, it would speak to lists full of notable absences. The statistics presented in ‘We are not consultants’ show many such absences in relation to the CAC collection:
‘of the 1481 works in the CAC collection 39.8% (576) are made by women’;
‘of the 102 artworks acquired for the collection via the Fisher’s Ghost Art Award 30% are made by women.’

One particular statistic jumps out to me: ‘0% of artists in the CAC collection were counted as non-binary.’ This highlights the fact that, at the time of collection,  there were only two options given for recording the artist’s information: male or female. This erasure of non-binary identities is something that is problematic in the creation of exhibitions featuring ‘all women’, just as it is in strategies of research or activism that call for ‘equal representation’. Indeed, CoUNTess has now been seeking consultation with people of diverse gender identities to develop strategies to redress this in their future practice. 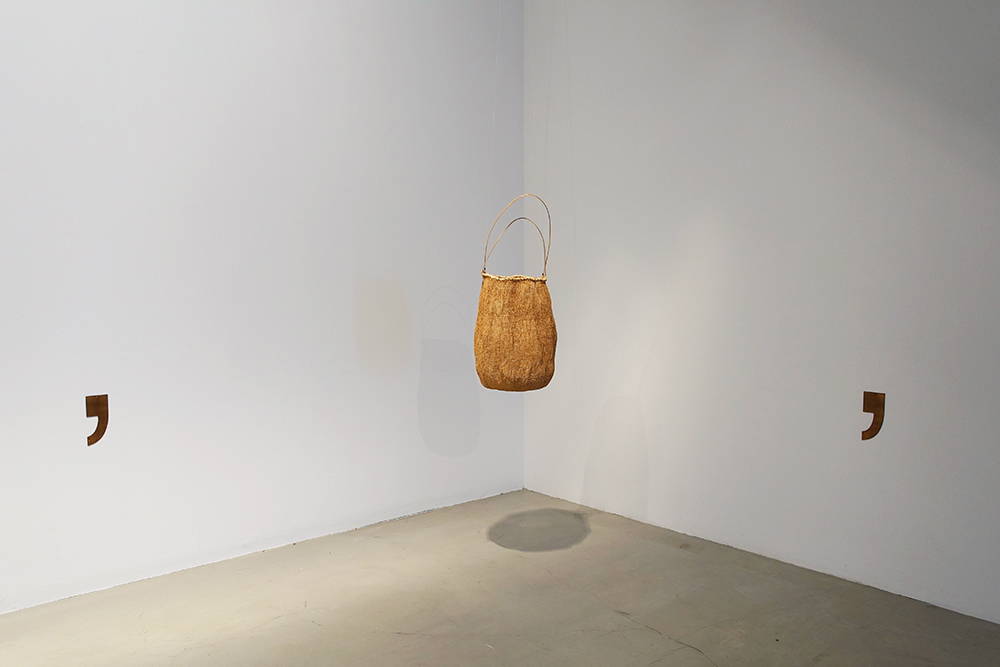 This exhibition could easily feel like another ‘tick-the-box’ gesture towards caring about equality, which is so often the vibe I get from exhibitions of ‘all women artists.’ However, through the choice to open their collection to the scrutiny of CoUNTess, and also through the inclusion of artists from all stages of the collection’s history (the oldest work on show is by May Bocking, circa 1900), this exhibition emerges as something much more interesting. At its heart, this exhibition is about collections, the act of collecting, and the obligation that institutions have to examine their own collecting practices.

But how do institutions such as CAC choose what artists to collect? If searching for artists whose significance or commercial value can be readily determined, commercial galleries emerge as the natural place they might look.

One of the most interesting aspects of the 2014 CoUNTess Report is that it collects data on numerous sections of the art world, and then highlights the complex ways these structures interrelate. It also demonstrates that ‘the closer an artist gets to money, prestige and power, the more likely they are to be male.’1 While the ratio of female artists exhibited in artist run initiatives is reasonably strong at 49%, the stats for other parts of the sector tell a different story: in 2014, commercial galleries showed 40% female artists, and state museums just 34%.2

For Artereal Gallery, these statistics seem to be a call to action. In the catalogue essay for Nevertheless, she persisted, curator Rhianna Walcott states that Artereal ‘recognises the responsibility of commercial galleries in affecting change.’ The presentation of this particular exhibition takes this responsibility seriously. Rather than exhibiting the work of artists already represented by the gallery (as a side note, Artereal represents 54% female or non-binary artists and has an all-female team), the curators sought out artists who did not already have gallery representation.

Having read the strident words of the catalogue essay online before coming, I was intrigued to note that this text was not present at the exhibition. Instead, the room sheet was accompanied only by the artist’s individual bios. This choice foregrounds the works themselves, allowing audiences to draw their own connections between the artist’s practices. 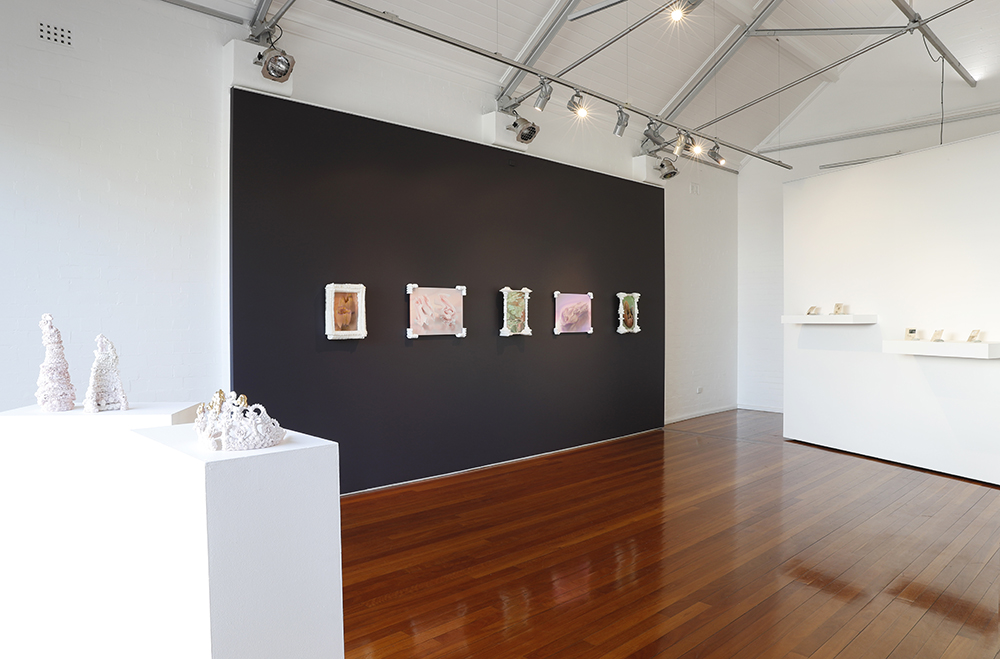 And it is, indeed, a slick looking show, full of interesting thematic or aesthetic resonances. In Leila El Rayes’ series of photographs, ‘Dancing in the crevice of desire’ (2018),  figures swathed in richly patterned cloth meld with an equally patterned backdrop, their bodies hovering on the edge of visibility. The designs on these cloaked forms are in conversation with Cat Mueller’s painting on the opposite wall, where dripping lines form a central block of hyper-coloured camouflage. Around the corner, the luscious piped-icing porcelain of Ebony Russell’s sculptures sits alongside Grace Blake’s bulbous 3D-printed frames.

In a quiet alcove, photographs documenting visceral bodily performances by Brooke Leigh are paired with Sabella d’Souza’s video ‘22/f/aus’ (2017). This latter work is a ‘wiki-how-survival-guide for bodies of colour in the face of racial, gendered and queer erasure in virtual spaces.’3 It’s an absorbing piece, which deftly combines the mesmerising quality of YouTube makeup tutorials with humorous text. In commenting on the whitewashing of online spaces, D’Souza also deliberately extends this criticism to the art world—‘Did you really think the white cube was named after only the wall aesthetics?’ 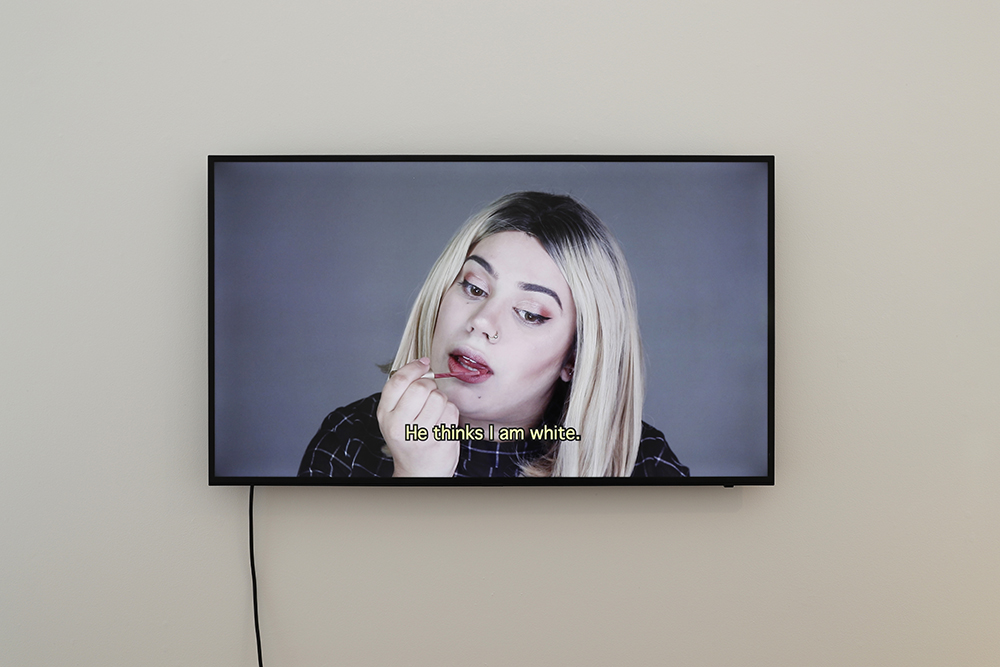 In tandem with the exhibition, Artereal also hosted a panel discussion that included speakers from diverse fields—journalists, curators, activists, politicians, writers, and artists. At times, the conversation touched on the structures in the art world that impede women, particularly those with children. There was discussion of tokenism, of equity versus equality, and of destructive gender binaries. There was also a vibrant sharing of strategies for mentoring younger female or non-binary professionals, and indictments against lazy curating. But amongst the talk of persistence and resilience, there were definite signs of frustration and fatigue.

During the talk, my thoughts went back to one of the works shown Campbelltown Arts Centre, ‘Runaway’ (2008) by Barbara Cleveland. In the video, a lone, determined woman sprints in slow motion towards camera. She is sweaty, and bloodstained. Flashing lights and pumping 80s music surround her. A gun fires, and she stumbles. The image cuts to another female figure, who repeats the scene. The ongoing struggle towards gender parity in the arts can sometimes feel like a similar kind of slog.

But the data collected since the CoUNTess blog began does show that we are moving forward. Gender representation has increased significantly in some spheres of the contemporary art scene, and seeing these two different spaces commence the year with such a nuanced engagement is encouraging. While the gains may be slow, it also makes conversations of how we continue to improve even more vital. The panel talk at Artereal returned continually to issues of class, race, and other forms of marginalisation beyond gender oppression that the art world has a role in perpetuating. The catch cry of Flavia Dzodan’s essay keeps ringing in my ears—‘my Feminism will be intersectional or it will be bullshit.’

And so we persist (nevertheless). The counting will persist too, with CoUNTess due to release a new report later this year (while the last one documented 2014, this one will give us a snapshot of 2018). We’ll see what kind of picture the new numbers show.