The website for the Singaporean cultural park Haw Par Villa (formerly known as the Tiger Balm Garden) proclaims that the park is a ‘treasure trove of Asian culture, history, philosophy and religion—quirky yet enlightening, at the same time.’ Built in 1937 by Aw Boon Haw, a millionaire philanthropist who marketed Tiger Balm ointment to the world, the park features a series of dioramas that reference Chinese mythology—mermaids sunbathe on rocks, dragons and tigers are frozen mid-prowl, and two denizens of the underworld stand guard, one with the head of an ox, the other with the face of a horse.

As a country, Singapore bears the marks of multiple shifts in power and territory—colonisation, occupation, decolonisation, and a sudden influx of capital in a redesigned economy. And the history of Haw Par Villa mimics these processes of transformation: there is disrepair, then renovation, renovation again, and finally, a relaunch as nostalgic theme park.

Haw Par Villa forms the locus point of Jess Bradford’s solo exhibition, An Image of a Tiger, at Galerie pompom. Developing on her 2017 work Haw Par Villa, Bradford presents us with an assured and quiet rumination on cultural and personal memory. For Bradford, the park works as a metaphor for the loss of coherent identity in the face of decolonisation and rapid economic expansion.

A shelf in the shape of an inverted U dominates the gallery space, its own edge undulating against the straight edge of the wall. Part tree-trunk, part open palm, part wobbly territorial line, this sculptural piece serves as the display for Bradford’s porcelain objects. Each of these objects are miniaturised studies of Haw Par Villa’s rocks, which, under-glazed, are deliciously thick and blobby. Some are egg-shell-white; others coloured with rainbow tendrils. Several of these rocks are cradling a painting no larger than a playing card, and, in their exquisite detail, these paintings could easily be mistaken for black and white photographs. 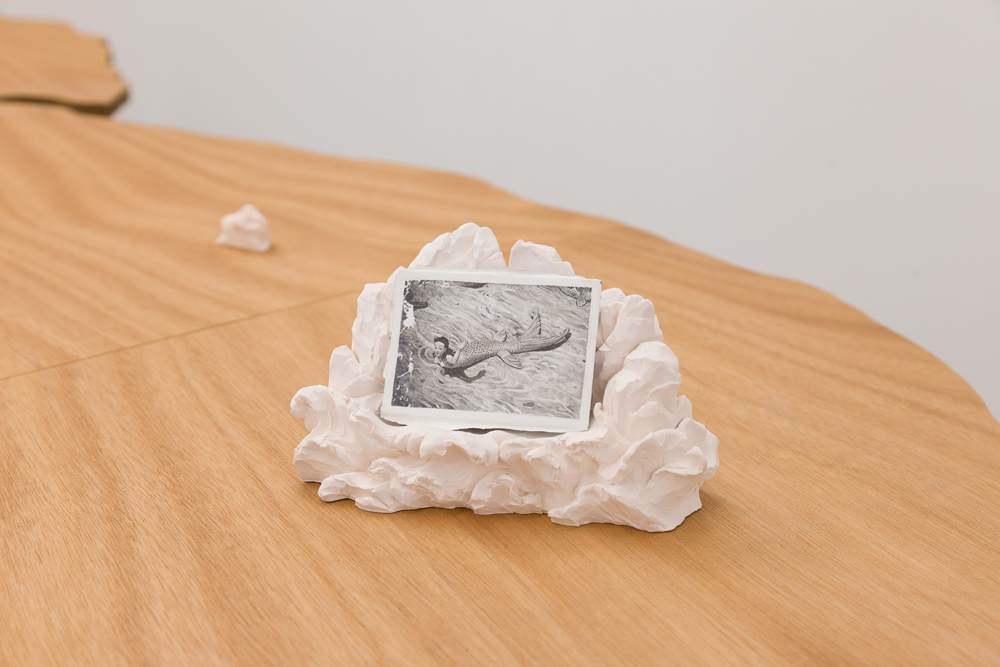 Each of these small works are (re)presentations of found photographic documents of Haw Par Villa. Taken during the 1950s, these source images depict the park before its renovations, and blend with Bradford’s own memories of the space. The park itself is what Walter Benjamin would have called a threshold—an architectural space where ‘life pauses’, where our apprehension of place, and our relation to it, starts to fray.1 Renovating such a site never completely wipes it of its previous forms—we cannot erase the threshold—and often this process will only make its past selves all the more present (Stephen Barber: ‘to build rearranges the complex network of the objects which are not there’).2 And in transposing such representations of representations (a painting which is a photograph which is an artificial mermaid) into the gallery space, Bradford adds yet another temporal lag.

This is not postmodern ironic refashioning, but rather an earnest dislodgement of any fixed ‘original’. Multiple pasts press into the present, and infuse it with fragmentation and disruption. It is the blending between what is imagined, and what is perceived to be real.

It seems to me that Bradford is also playing with the legacy of colonial aesthetics. The fragments of Haw Par Villa, recreated in miniature form, make me think of the botanists returning to the imperial centre with their taxidermied birds, or of models displayed at a nineteenth century world fair.

It is a testament to the nuances of Bradford’s practice, and the thoughtfulness with which she approaches the material, that the circuits of meaning are not closed off, but fluid and open. Even the lexicon used to describe the work fails to pin it down—painting or drawing doesn’t seem right, neither does sculpture or ceramic, and shelving or desk or open vitrine never quite lands on what the exhibition actually is. The installation (again, I’m unsettled by this word) sits in an interstitial zone—it needs to be seen, not described.

But there’s something else going on here too, which can be found in the materials themselves—the warmness of the Tasmanian oak, the plywood, the porcelain, and the liquid pencil. At the end of William Faulkner’s The Wild Palms (1939), the lapsed doctor Harry Wilbourne, in trying to hold on to the image of his love, realises that ‘memory [is] just half of it, it [isn’t] enough.’3 Memory needs to be lodged somewhere, and, for Harry, it is in the ‘old meat’, in the flesh and bone: ‘because if memory exists outside of the flesh it wont be memory because it wont know what it remembers’.4 In order to fully consider our memories and our past, they need to inhabit material form. And when I think of Bradford painstakingly rendering old photographs, or firing the rocks of Haw Par Villa in porcelain, I also think of this—it is the act of setting and sustaining cultural memory in physical space.