In 2016, Taiwanese performance artist and choreographer Su Wen-Chi undertook a six-week residency at CERN (The European Centre for Nuclear Research) in Geneva, Switzerland. She drew inspiration from this residency to create a suite of three works: Rainbow Trilogy, which includes Infinity Minus One.

The Micro and the Macro
The stage is bare, except for several musical instruments and two microphones set up on a white Tarkett floor. A multi-coloured metallic cloth sits on the floor behind the instruments, and lighting tracks have been installed on both sides of the stage as well as the ceiling.

Senyawa—who will be creating a live score to accompany the work—appear first. The group, which is made up of two Indonesian musicians (Rully Shabara and Wukir Suryadi), start with a gentle rhythmic, breath-based sound that quickly rises in intensity. As the two dancers enter the space, the lights drop and a solitary laser beam cuts straight across the middle of the room.

The Macro: duets, or on not being atomised
The dance unfolds as a duet. The two dancers appear to duel with each other at one point early on, but, for the majority of the work, they are dancing with each other rather than together in space. The piece incorporates strong and dynamic movements where the dancers, with knees bent and bodies poised, weave around the lasers, only making contact with the light occasionally. The tempo of the work is fast, and becomes almost frenetic in parts.

Infinity Minus One seeks to explore the particle and the universe—the smallest and largest elements we can conceptualise—so I am surprised that the dancers, rather than agitating each other (as one might expect from opposing forces or opposite sides), instead touch and respond to the other’s body.

Given that we live in an increasingly atomised world where individual agents or particles remain separate, the duet strikes me as tender and intimate. It’s a very human and emotive offering given the inherent coldness of the topic, and the imagined coldness of the particle accelerator installed in a huge laboratory. Wen-Chi’s interest in technology runs throughout her works, as well as the persistent idea of increasing solitude due to our networked lives, and yet, this hopeful and human-centric work pushes against this. 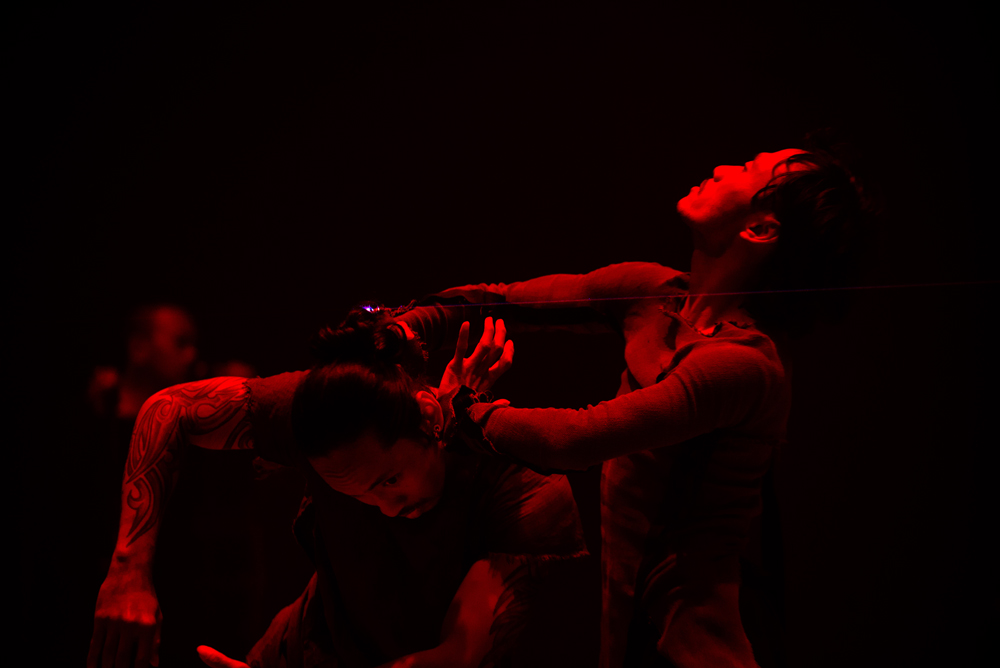 As Infinity Minus One progresses and builds over an hour or so, the dancers travel through time and space. The lone, single laser multiplies into numerous multi-coloured lasers that bounce off one another and reach out into the audience. The lasers call out to us as if from the vast expanse of the cosmos, evoking the beam of a lighthouse projecting into the night across a boundless ocean.

The Micro: the Cloud Chamber
During the Liveworks panel talk, Wen-Chi speaks about searching for the dance of the scientists through physical observation: the scientists drink a lot of coffee, often sit down, and carry their heads with weight. I wasn’t expecting this very literal point of departure, as the work itself seems much more elusive—a fantasy meeting of art and science.

But it was ‘the Cloud Chamber’ that provided the breakthrough for Wen-Chi in creating this work: a particle detector used to visualise the movement of ionised radiation, which then allows the particles to become visible as a trail. We can now see how these particles pass through everything in their path, including our bodies and DNA. The lasers used by Wen-Chi during the performance allow for a more literal representation of these trails: cutting through the smoke and mist, drawing a firm line across the space, and making contact with the dancers’ bodies.

The Macro: dark matter and infinity
Infinity minus one, as a concept, poses the question—what is beyond infinity, or, what may have existed before the big bang?

The Micro: rhythms
Senyawa’s live score incorporates a wide array of sounds: deep rhythmic tones that conjure cosmic movements on a massive scale, chanting, the repetition of words, and a form of audible breathing that feels almost primordial. It is the addition of Senyawa’s words and songs that characterises the dancers’ moments of discovery or realisation.

For me, the dancing in Infinity Minus One forms just one aspect of this immersive work. When it is contextualised more broadly within the Liveworks festival, the idea of dance is freed from a traditional framing—Infinity Minus One can be considered in suspension, where lasers, music, sound and discussion all inform the experience and interpretation of the work.