Silicone breast-enhancing inserts, self-massage tools, flat screen televisions and their associated cables, cans of ‘Mother’ energy drink, and a boxy wind blower. These objects of artificial simulation constitute the set of Angela Goh’s Uncanny Valley Girl at Liveworks Festival, and generate many of Goh’s performative actions. Everything appears synthetic, down to her pleather footwear and faux fur-lined parka.

At the beginning of the performance, Goh stands on stage in a state of active inertia, like a stuck Sims character. The fluorescent lighting overhead means that the audience is watching each other, as much as watching her do nothing in particular. She exits, and, on re-entry, Goh is naked, except for a pair of sunglasses. Her arms open and close with such intensity that she seems to pulsate. With her feet anchored to the floor, she rotates like a display car, or a rotisserie chicken, her movement smooth enough so as to appear motorised. Flooded by bright white lights, and accompanied by Colin Iletro’s shuddering tones, she appears as a figure of light and sound. The wind machine blows clothes across the floor: bootcut low-waisted jeans, a cropped pink tee-shirt, and lime green boots. Goh dresses, and when she crosses the stage, boots unzipped, her steps are jarringly clunky and analogue. The cyborgian goddess brought down to us in human form. 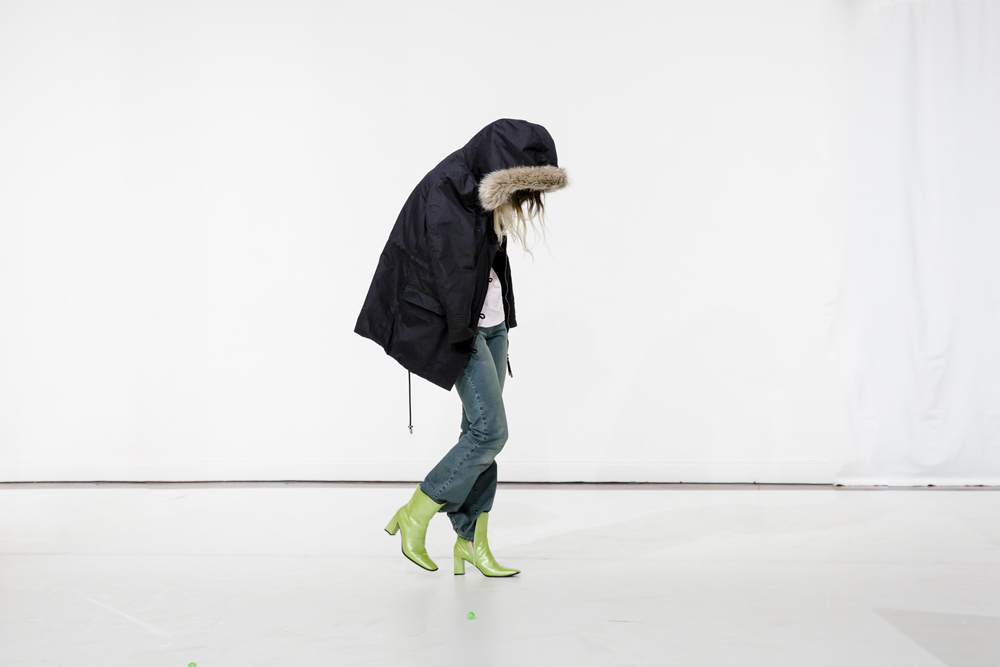 We have entered the terrain of soft robotics. The current conception of the posthuman is not a clunky automaton salvaged from our rapidly reducing mineral resources, but rather one that is grown, tended, and nursed to life in a lab. Scientists have already discovered how to make fully soft robots. Without batteries, or internal hardware, they are instead powered by a microfluidic logic circuit sustained by an intricate networks of gasses. ‘Our best machines are made of sunshine’, writes cultural theorist and trained biologist Donna Haraway, in her ecofeminist essay The Cyborg Manifesto (1985)—‘the new machines are so light and clean. Their engineers are sun-worshippers mediating a new scientific revolution associated with the night dream of post-industrial society.’1 The ‘ocobot’, for instance, looks to the ingenuity of the octopus: without a skeleton, the octopus can perform feats of strength and dexterity.2 Our human opacity and materiality weighs us down.

During Goh’s performance, clusters of nippleless silicone breast cups are placed on the floor. Goh peels back their plastic sheath and delicately adheres each cup to a rectangular neck massager, forming a mass of the same tone and texture as a Patricia Piccinini sculpture. But whilst Piccinini’s sculptures are remarkable for their lifelike qualities and unsettling stillness, this piece gently undulates. It’s a movement so smooth and precise that it can only be robotic, yet it resembles those early and unchanged ancestors of human animals—the jellyfish, who are predicted to outlive us all. 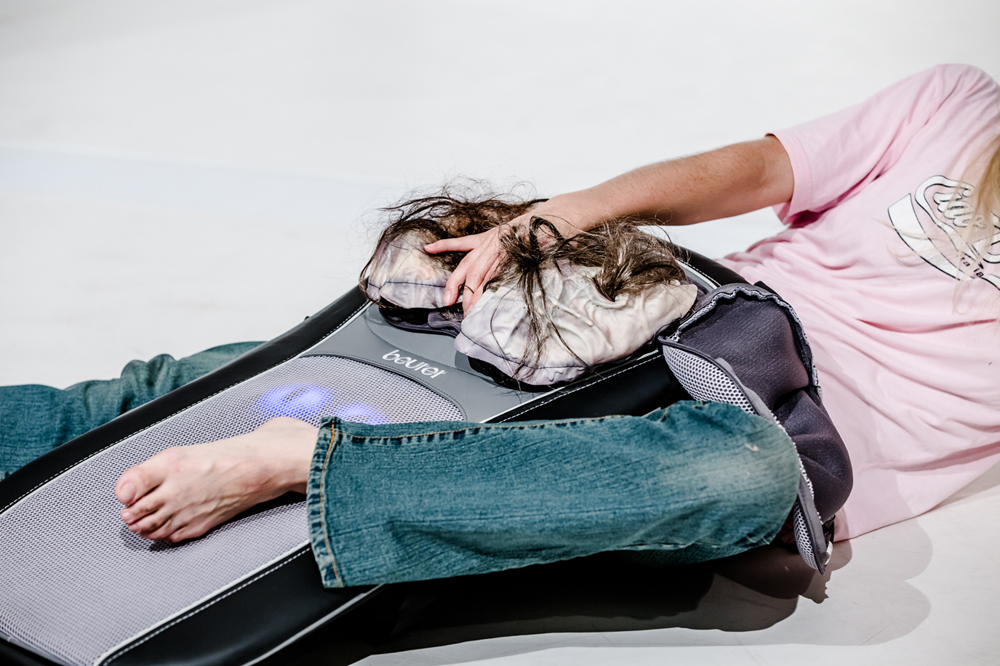 ‘Tenders’ was the name given to the semi-skilled factory workers who oversaw machines in the 19th century factory, before the introduction of robotic automation systems made their work redundant. In Uncanny Valley Girl, technology tends to the needs of the (post)human.

Fixed with the same silicone cups we saw before, the swirling orbs of a neck massager now also appear with stringy long brown hair. Goh slides across the floor; the massager held in place between her legs. In this position, and with Goh’s fingers guiding downwards, the object takes the form of a giant labia. Knees up, head reclined—Courbet’s L’Origine du monde (1866) as self pleasuring femmebot.

Throughout Uncanny Valley Girl, every bodily desire is tended to with mechanical precision: urges are satisfied, climaxes are reached, a protruding twitching tongue is relieved with a drink from the can of ‘Mother’. Later in the performance, two white cube pleather footrests are repurposed as platform shoes, and another neck massager becomes impossibly hard breasts. This is the body augmented and extended to be more sensual and more powerful.

In the final moments of Uncanny Valley Girl, scrolling text illuminates the flat screens. Accented with Australian and American intonation, and set against a soundtrack of accelerated typing, two female voices read these passages aloud. It is a text-to-speak program, the delivery jagged and unnatural, but still, certain words catch. Calibrate. Girls. Augmented. Slide. Simulate. Valley. Non sequiturs that are also loosely associative, these words recall early experiments in computer generated poetry, such as Alison Knowles’ House of Dust (1967), which relied on words fed into a random computer matrix to generate poetic juxtapositions. Such a fascination between poetry and technology remains, with the emerging field of ‘computational creativity’ continuing to explore AI’s capacity to write in verse. But in Uncanny Valley Girl, the text we are reading and listening to is not computer generated—it is another simulation: produced by writer Holly Childs, it is an artful appropriation of ‘random’ computer logic.

The text acts as an epilogue to the performance, and reinstates the work’s ambivalent position between the human and the posthuman. As the boundaries between machine and organism become blurred, as robots become soft and humans appear to harden (particularly in relation to bodies and borders), Goh embraces the in-between, the hybrid, the cyborgian. Haraway’s cyborg is ‘resolutely committed to particiality, irony, intimacy and perversity’, and Uncanny Valley Girl appears cut from the same cloth. The sole inhabitant in a world ravaged by technocapitalism, she is at once indifferent and stimulated, passive and powerful, the contradictory offspring of our near future.