Eight years ago Cherine Fahd’s grandmother gave her a collection of family photos. In a nondescript envelope Fahd found pictures from her grandfather’s funeral; he had died too young, when she was still a baby. Although Fahd and her grandmother were very close, the pictures revealed a grief that had been otherwise unarticulated her whole life.

The name of the photographer, assumed to be a family friend, remains unknown.

For a little while now I’ve been experimenting with my own private interpretative method. When I leave the space of an artwork, I wait to see what image or detail, phrase, returns to me. However minor, this sticky motif becomes the ground of the work. I name it the ground of the work and from there I can begin to interpret.

A group of women stand in a cluster. The image is cropped to emphasise their grouping, their legs and shoes. All of them are clothed in grief’s common uniform: black knee-length skirts, finely stockinged legs and patent leather court shoes. They don’t stand on bitumen, or concrete, or floorboards, but on bare, dry, clumpy earth. This is the ground of Apókryphos.

Keeping this image of collective grief in mind, my modest suggestion for readers would be to start Apókryphos at the beginning—the very beginning—unfold the wraparound cover and consider the first blank internal page and its thick strip of binding tape—black—consider the title page inscribed with its letters in reverse—mirror-writing—and the contents page, which gives clues for the choreography to come—response, response. Sense Fahd’s mission: grief’s percussive force in the body—what it means to look—conversion—dialogue—how energy moves—what we inherit.

The first great surprise of this work is that it takes thirty pages to get to the images in question. Fahd begins her book in reverse—the mirror-writing is the initial clue—with footnotes and endnotes, ordered into two essays. One by Fahd herself, and another by curator Daniel Mudie Cunningham.

The relationship of image and text is an indefatigable field of inquiry. Fahd arranges her thinking based on the notion of dialogue, with several pairs or doubles in mind: image/text, author/reader, artist/curator. Fahd explains that when she looks at a photograph, she enters into an inner dialogue. It’s an act of conversion as well, a repetition that also generates. 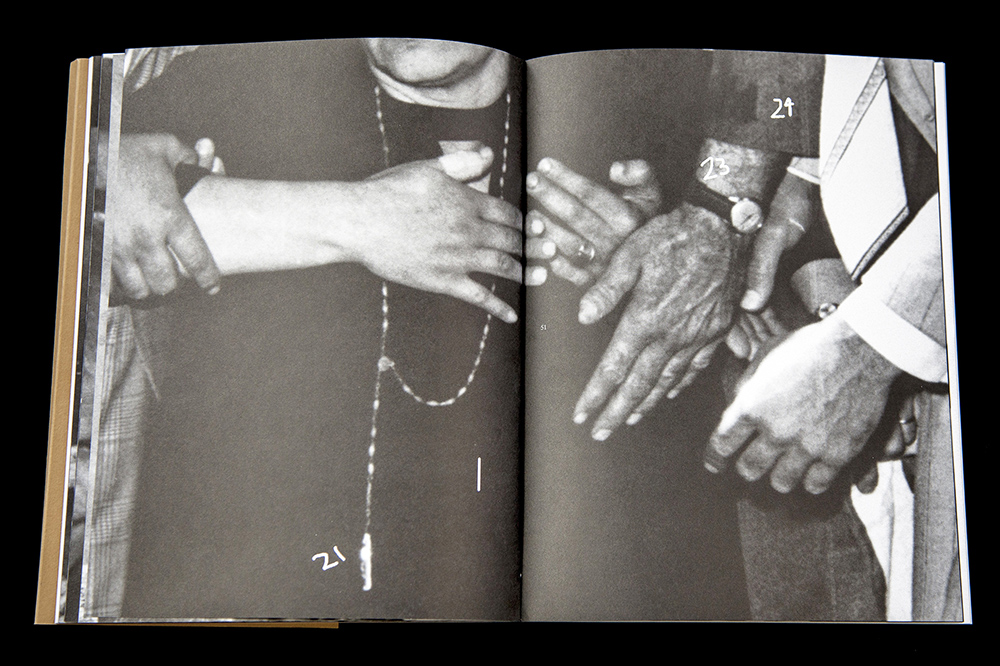 Fahd begins with her own set of questions. Who took the photographs? Why could her grandmother not tell her about them directly? Each footnote—there are fifty-three in total—meditates or riffs off those images, as yet unseen by the reader. Although she was not present at the funeral, Fahd tells us that she knows the church featured in the photographs intimately. (This is the second surprise of the work; I receive it with a jolt. That an inner architecture can become differently peopled in an instant. That she can tell us how the sun fills the church with an amber glow.)

Knowledge of this early grief recollects Fahd’s understanding of her family in a new pattern. Noting that in the pictures, her mother is heavily pregnant with her younger sister, Fahd writes, ‘I wonder what sort of chemicals—hormones, adrenaline, cortisol—were released into the womb.’

In the final footnote, she names him for the first time, her grandfather: Kablan George Fahd.

Daniel Mudie Cunningham responds in kind, structuring his thoughts in loose response to each of Fahd’s paragraphs. Both Fahd and Cunningham’s thoughts orbit from particularities of the images in question to larger revelations about mortality and grief, our collective temporary permanence.

For a moment, when contemplating this review, I think about responding the same way, in fifty-three clipped and numbered paragraphs of my own. But it feels like a trespass—who am I to enter into their relation?

I let the two interlocutors prepare me for what will follow. I learn that in the images to come I am likely to recall my own history of grief. The way they do this is for you to read, not for me to repeat here. (The reader always holds a gift—the uncanny grace of their private experience. A writer chooses what she tells and so proceeds with care.) 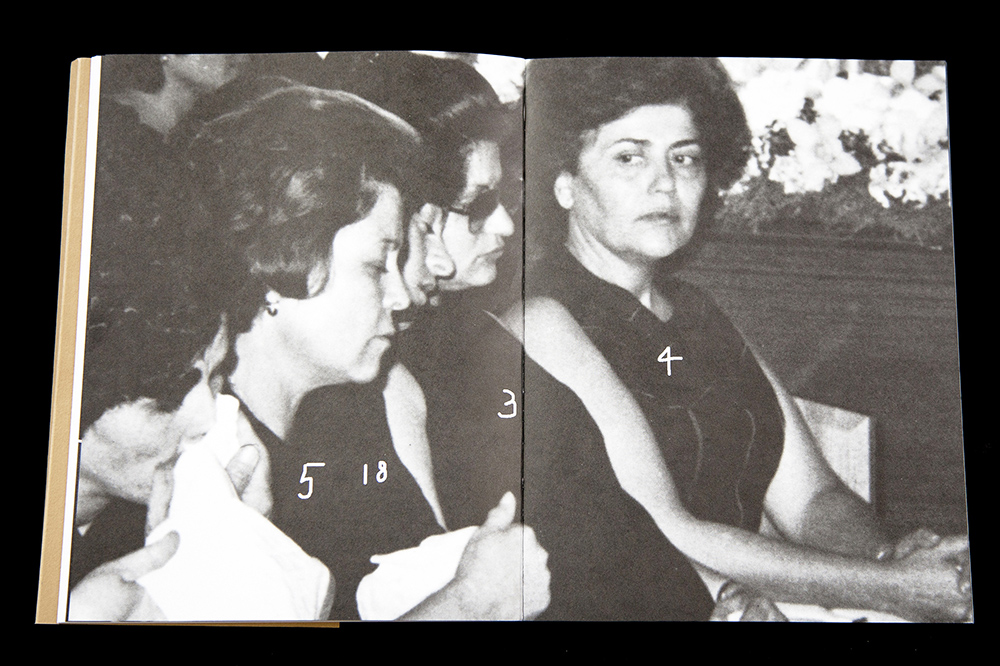 Fahd’s only direct question to the reader: ‘I ask myself (and now you) what is the role of the witness? Am I (and now you) witnessing what you should not be witness to?’ I turn the page to the first set of images with this question in mind.

It’s a sequence of blown-up details from the original photographs. Fahd gravitates toward gestures, and the result is cinematic, like lost stills from a silent film. Fingers at the temple. White button-up shirt. White blouse. Bottle of booze. Sun shard. A soundless woman her mouth wide open. Folded arms: because the new reality is beyond belief. In certain photos there are people standing in an overlapped way, almost like shadow forms of each other. Or like multiple dimensions have been captured at once.

It reminds me of one of Fahd’s earlier projects, ‘Shadowing Portraits’ (2014–2016), part of a volume also published by M.33. For that project, Fahd positioned herself as the shadow to different curators and artists, copying their shape and gestures, standing right behind them in the photographs, unsuccessfully invisible. In that work, Fahd grappled with her own ambiguous presence as the photographer, and the question of how her identity implicitly framed the shot, while also making visible the power of other actors in how a work is realised. Something very different is going on in these photographs, though. What do we see in these figures and their repetitious shapes? Are they embodying grief’s greater gesture? Is it the natural mimicry of family, community? The force of absence passing through like an earthquake?

To Cherine Fahd, as a partial response to her question about the reader as a witness I want to say: What your family’s pain affirms in me is my own deep register of feeling. A private torrent that flows under my surface and which will one day transport me from this world too. Mutinous movement—that which might be called spirit or soul.

As I read the book, too, I notice I’m being pulled along according to a certain rhythm. Beginning with the footnotes means I look and scry each image according to the slow time of the reader.

But in the third section of the book, the tempo starts to syncopate. Fahd presents the original photographs with short annotations—a column of names indicating who is in the shot, and next to that, a brief fragmented note. These take on the patina of poetry, mercurial, often loaded, incomplete. Alongside a photograph of a group of mourners gathered in a carpark, standing close together, touching, holding and looking every which way, Fahd writes:

1. Nothing left to say
2. As we reach the end of this
3. Many lives still
4. Babe in arms
5. English as a second language
6. New Australians
7. A vulnerability
8. He had no proof

The final section of the book is a list poem or index of abstract terms, listed alphabetically: Abjectness, Absoluteness, Accursedness….Scratched over in black lines so the words are almost unintelligible, it looks almost like, in their black uniforms, the mourners have left the funeral and walked over these pages instead. This section moves the relation of text and images from syncopation into something like a chorus. Handwritten marks replace typography; language and image creep closer together, instead of unification, doubt prevails.

I was drawn to the women’s feet; the book begins with the footnotes first. The ground, clumps of earth, burial plot—the ground of the work. Gesture and shadow—I am left with a final thought.

Blood relative or not, nonetheless, from this unnamed photographer Cherine Fahd inherits a way of seeing.