They’re so bright I can barely look at them. I manage seconds before I have to duck back out again and stare at the white walls or the polished concrete floor.

They’re so bright, they demand to be seen but refuse to be looked at. The afterimage burns. The bright orange letters follow me wherever I go. I dart.

I really do wish for a more beautiful world.

I know I’m not alone in this.

Slowly, I judder my way into Lucina Lane’s paintings. I see, then, how the ‘w’ in know and the ‘t’ in not are touching, like school kids nervously holding hands. I see how Lane has traced her letters and filled them in with paint, suggesting, like the writer Rachel Cusk, the outline of meaning.

Struggling. Why is she doing this?—I text a friend, two chapters into Cusk’s Outline (2014). I can see why she told me to read it: sentences as beautiful as a curl of smoke. But I can’t see where they are going, whether they’ll build into a satisfying head or drift away. It takes time to understand how Cusk uses distance as a formal tool, inviting us to inhabit, but never fully see, her main character. The game is in how much she’s obliged to tell us, and how much we can fill in ourselves.

There are more traced letters on the other side of Lane’s exhibition, free to begin again. They tumble carelessly, each spinning like its own carnival ride.

Yeah, no handholding there.

The high-vis orange is nuclear. It’s a hazmat warning. A poisonous fish. The colour of Sydney right now, in all its safety-bollard glory: a city being constantly negotiated, constantly broken apart and rebuilt.

Lane’s paintings are so loud they start to feel sonic, like the fluorescence is making the air vibrate and my retinas fizz and boil. 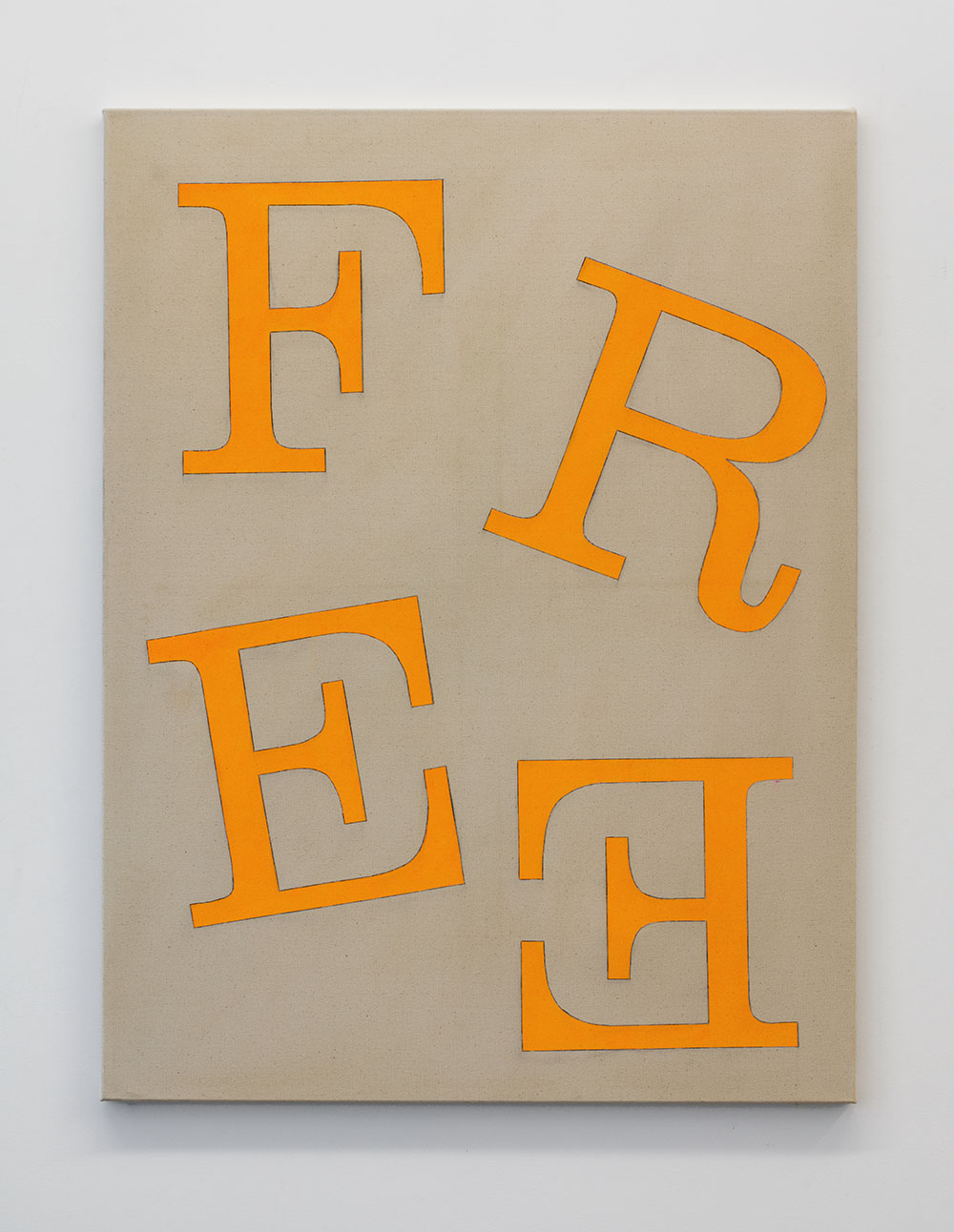 I can’t work out how much of this is Lane’s doing—how her choice of colour is affecting me physically—and how much is my own wariness. Is she…being sincere?

I know I’m not alone in what exactly? Life? Love? Hating on the latest Netflix release? Lane doesn’t really signpost her intentions. Or at least, not in the way an Elliot Collins painting might, with its text set into flurries of colour. When I read phrases like The way a child leans on you as you read them a story there is no wavering. I believe him, and I let myself fall into the memory of that feeling. My heart and my head and my body all go ahh.

But I don’t know whether I believe Lane, or whether she really wishes for a more beautiful world. It sounds plausible (who doesn’t, I guess?) but the phrase is so pat I have trouble trusting it. Perhaps it’s because the way we relate to text in visual culture is changing. We live in an age of glurge now: earnest words looped into sentimental typefaces and pasted into stock photos. Passages about true friends, blinks of the eye, nourishing the spirit, sunsets. Wine. But is this all I’m fighting? The push-and-pull of Lane’s work suggests she wants us to be wary. Look at me, don’t look at me.

There’s also something a little cagey about her choice of words. The text paintings in free to begin again all speak of a strange kind of desire—familiar, but generic. The phrases she’s used could have come from kids on the 377 bus or an art school lecture. I’m not surprised to learn they’re a kind of found object: overheard snippets, excised from other people’s conversations. So, this desire, it’s not hers, not exactly. It’s more like a current she swims into and inhabits, rather than projecting it as her own.

That’s why we know it. We’ve felt this current too. In one way or another, the paintings in free to begin again all speak about potential. They speak about patterns and combinations. Twists of the wrist and twists of the future. About starting again, making things better, when you still have the afterimage of the past dancing behind your eyes.

My son, he’s little. Right now he’s learning to read, and he comes home from school with ancient homework readers. They’re almost always stunningly awful; the idea of books rather than books themselves. Sometimes the fonts are so ugly they make me want to hiss. Don’t they know? Don’t they know anything about typography? So much of reading is muscle memory. It’s practicing a dance, at speed, through kerned spaces, hollows, lines and curves. Those little serif feet are one of the anchors that hold us steady, but there are others. Earlier this year I came across Dyslexie, a font made for people with dyslexia. The letters have a weight to them, all fat bottoms and heavy legs—like they really could hold hands. In Dyslexie, the outline is both a letter and an arrow: this way up. The rules are embedded in the shape of the thing. It’s a reminder that form and meaning are more than containers and objects.

Lane’s been thinking about this feedback loop between form and meaning for a while. In a 2014 exhibition called Read, she presented a series of untitled paintings like haphazard schematics. There was one in red with boxes dissected into triangles and grids, like a guess-what-comes-next-in-the-pattern test. Another one in black could’ve been a layout for a car or timber yard. One in blue looked like plans for a little garden plot. By suggesting themselves as shorthand representations of abstract concepts, they played with the idea of being abstract paintings. The paintings almost seemed to flicker as we recognised different patterns and moved through different ways of reading them.

We never get to turn it off, this need to make sense of patterns. That’s what I think when I watch the quiet miracle of my kid learning to read.

The final work in Read, painted in green, was a line of text that folded back on itself, trapped in its little box like a Nokia snake: work I work everyday you don’t need to ask that’s what I’ll be doing. Making meaning is a kind of work. Making it like a cake, with this or that ingredient. Or making it like Sherlock Holmes, out of a string of little clues. We’ll be here, working working. Can’t stop. Won’t stop. 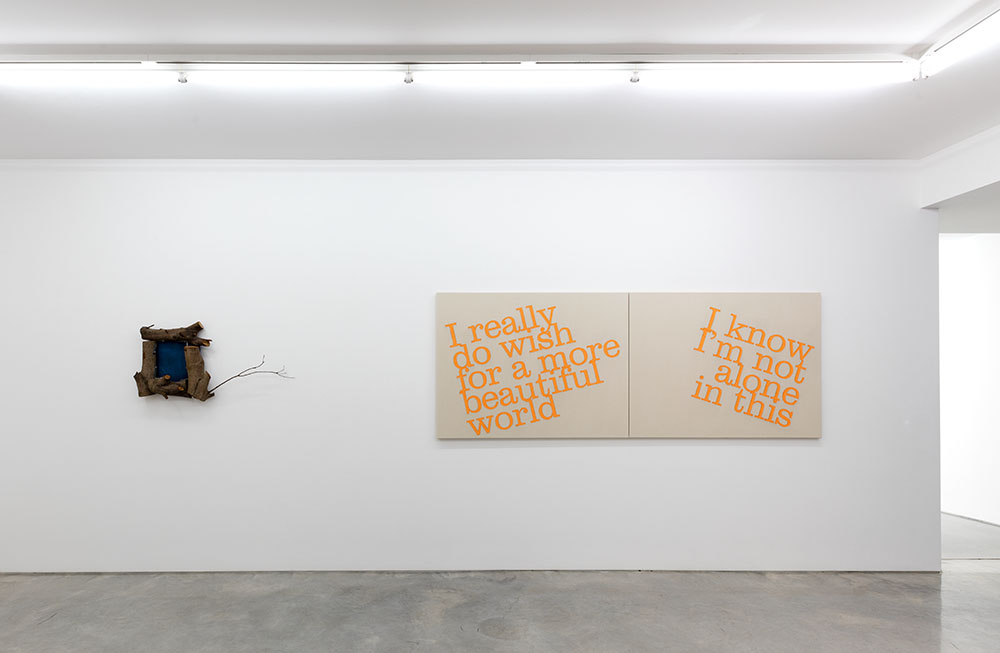 So, is this life advice or art advice? That’s the tricky thing with Lane. The works in free to begin again feel like both. I resist this because haha I’m not an artist, you’re wasting your time. But there’s a power to the way she breaks things down into components and makes them accessible: this is abstraction; this is a painting. Look, how easily they can be built. Here, you try.

free to begin again is not all text. Lane also uses her high-vis orange to paint flowers. It’s a kind of still life, the ultimate building block of art, but Lane has done it like a constellation of pink frangipani stickers on the back of a crappy Kia. Flowers, of course, are one of the ultimate building blocks of life. They begin. They end. They make other beginnings possible.

Alongside these dazzling orange canvases, Lane exhibits another painting. Though that’s not quite right. ‘Judging’ (2017) has no actual paint. It’s more like the idea of a painting, or an archetype. Four heavy logs, still with their twigs, are bolted into a frame around a tiny bit of stretched blue fabric. These are your component parts. A little from column A, a little from column B.

Together, we made it.

Other assemblages are possible.