This piece is the third in a five-part series of responses for BLEED—an online biennial festival from Arts House and Campbelltown Arts Centre. This article was written in response to James Nguyen and Victoria Pham’s ‘re:sounding’ (2020), which you can view here.

1. The actions, processes, or results of arranging or being arranged.
2. Plans or preparations for a future event.
3. Musical compositions arranged for performance with instruments or voices differing from those originally specified.

Paris, 2011
Craning my neck out of the window of my tiny chambre du bonne, I can just about see the entrance to the Musée d’Orsay. A major museum being on the same street as my short-term home is not even that noteworthy, given the extraordinary number of museums in Paris. I pass through so many they blur together into one overlong self-guided tour—until, that is, one of the museums jolts me out of my lassitude: the Musée du quai Branly.

France’s colonial legacy in Vietnam has weighed on me for as long as I can recall, but, in the summer of 2011, I am reluctant to think about what my ancestors lived through. I’ve travelled to Paris to become a writer, after all, not to reckon with the grisly past. Thinking about injustices from history would be a buzz kill, to say the least.

The Musée du quai Branly has an astonishing collection of artefacts, laid out to be discovered. But instead of feeling wonder, I am bewildered, disturbed even, as I gaze upon the enormous stockpile of objects hoarded together. Some time ago, Bernice Murphy described what she saw at the Musée du quai Branly as ‘regressive museology.’ She pointed out that the presentation of Australian Aboriginal art, in particular, was ‘in a vegetal environment…an exotic mise en scène.’

‘It can’t be decontextualised into a glorious otherness.’—Bernice Murphy

I am not looking for Australia on this day, but for ‘Indochine’—and I find no acknowledgement, let alone any admission of culpability. There is a small display about the war, away from the main collection, but no words dedicated to discussing French occupation. The omission is more than conspicuous when I compare it with the gruesome scene exhibited, so to speak, in my family’s home in Bankstown.

For decades, a photo from a yellowed newspaper clipping has a prominent place on the family altar in our glass display cabinet at home: the decapitated heads of Vietnamese nationalists who dared to stand up to the French. Those heads on the ground have always been juxtaposed with the two large headshots of my father’s parents, dead for more than half a century.

After my visit to the Musée du quai Branly, I don’t know what else to do except buy myself a postcard as a souvenir. 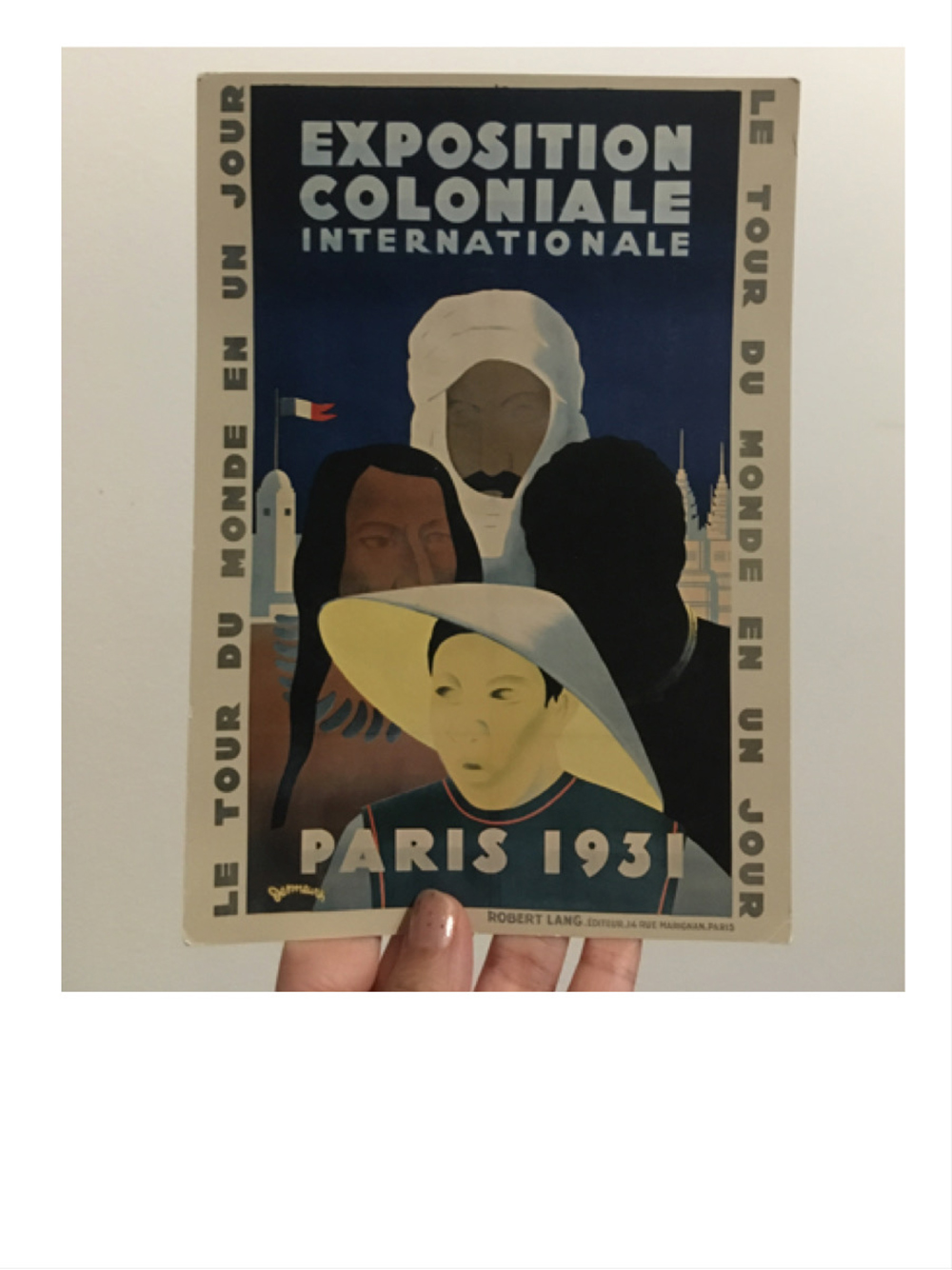 Bankstown, 2015
When I finally see Vietnamese instruments up close they seem outlandishly large; for the longest time I have only known them as miniature lacquered souvenirs in our glass display cabinet. Sometimes I take them out and examine them, not realising I already know what they sound like. Their music is found in the cải lương that floated throughout my childhood.

At the Bryan Brown Theatre, I watch dancer Geraldine Balcazar take to the stage wearing a tricorn headdress and sompot, a Cambodian ensemble. She dances slowly, gracefully, a reinterpretation of Cléo de Mérode’s dance from the L’Exposition de Paris 1900. Mérode was part of a showcase from Indochina, and the celebrated French ballerina performed alongside Italian dancers and Vietnamese musicians.

On the stage by Balcazar, a group of Vietnamese musicians play the sáo trúc, đàn tranh and đàn bầu. We could be witnessing this in Paris in the twentieth century; instead we are in Bankstown in the twenty-first. 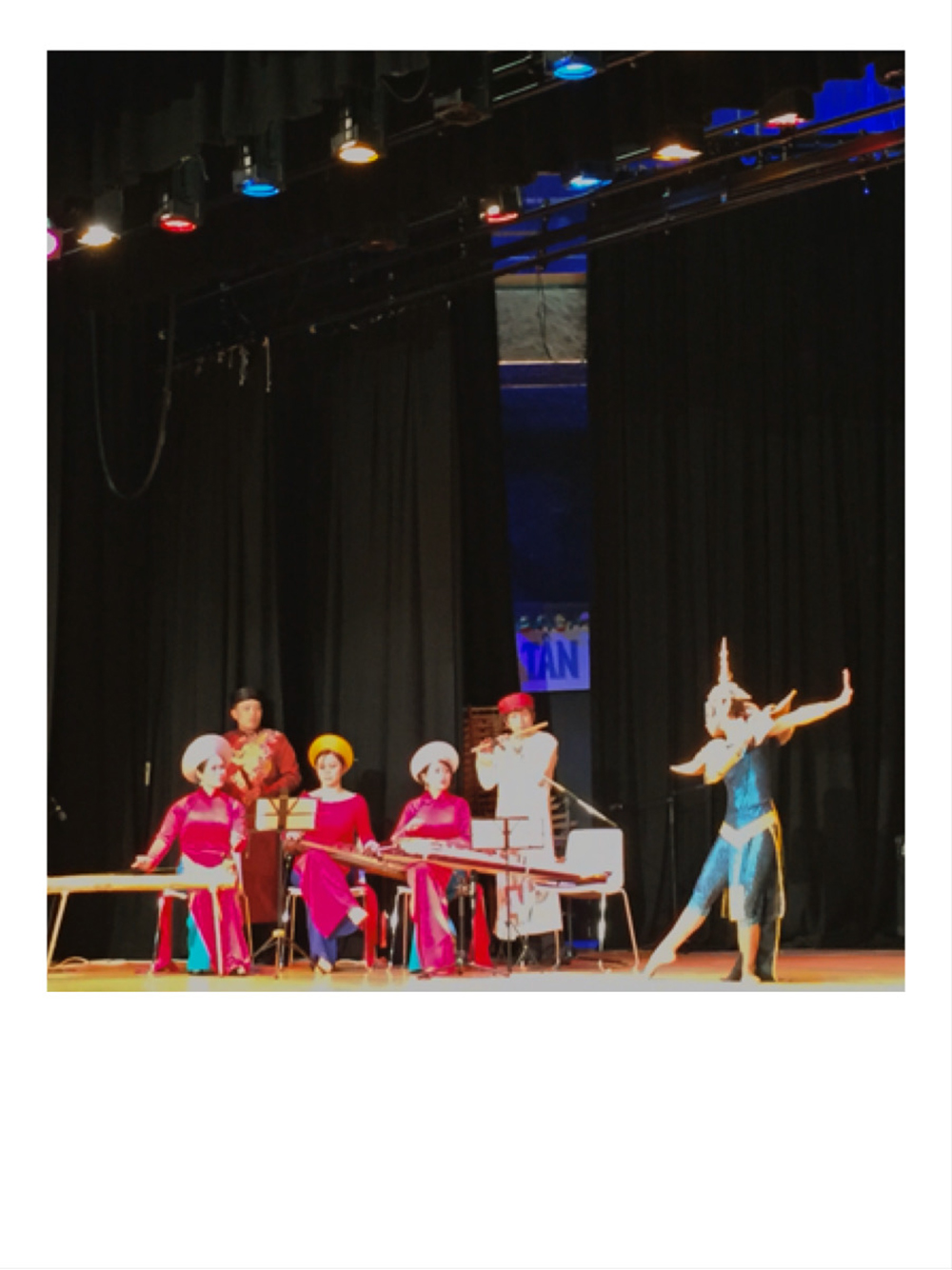 Tervuren, 2013
I go out of my way to visit the Musée Royal de l’Afrique Centrale, a week before it is due to close for renovations. Since its inception, the infamous ethnographic museum has been handmaiden to Belgium’s brutal regime in Africa. Inside the cavernous and marbled interior, ornate statues—carrying descriptions such as ‘Belgium Brings Civilisation to Congo’—are built into its very walls. The purpose-built and grandiose Palais des Colonies is a colonialist institution par excellence, with its omnipresent figures and old-fashioned taxidermy dioramas in glass display cabinets. The latter are just some of the many de-contextualised artefacts that have come into Belgian possession through plunder.

I read a bewildering statement on the wall: ‘…a history experienced differently but shared by Belgians and Congolese alike; it is a history where passions and emotions live on to this day’—as though coloniser and colonised had simply been in a relationship that hadn’t worked out. That’s not to say there aren’t some watered-down acknowledgements of past evils: ‘The way in which colonisation is portrayed varies with time and depends on those involved: back then it was shown in a flattering light, now it is regarded more critically.’

The institution was originally built for the Exposition Internationale de Bruxelles 1897—and it seems as if not much has changed since. At the Musée Royal de l’Afrique Centrale, I travel back in time to catch a fleeting glimpse of what has mostly disappeared from view, consigned to the inglorious past. 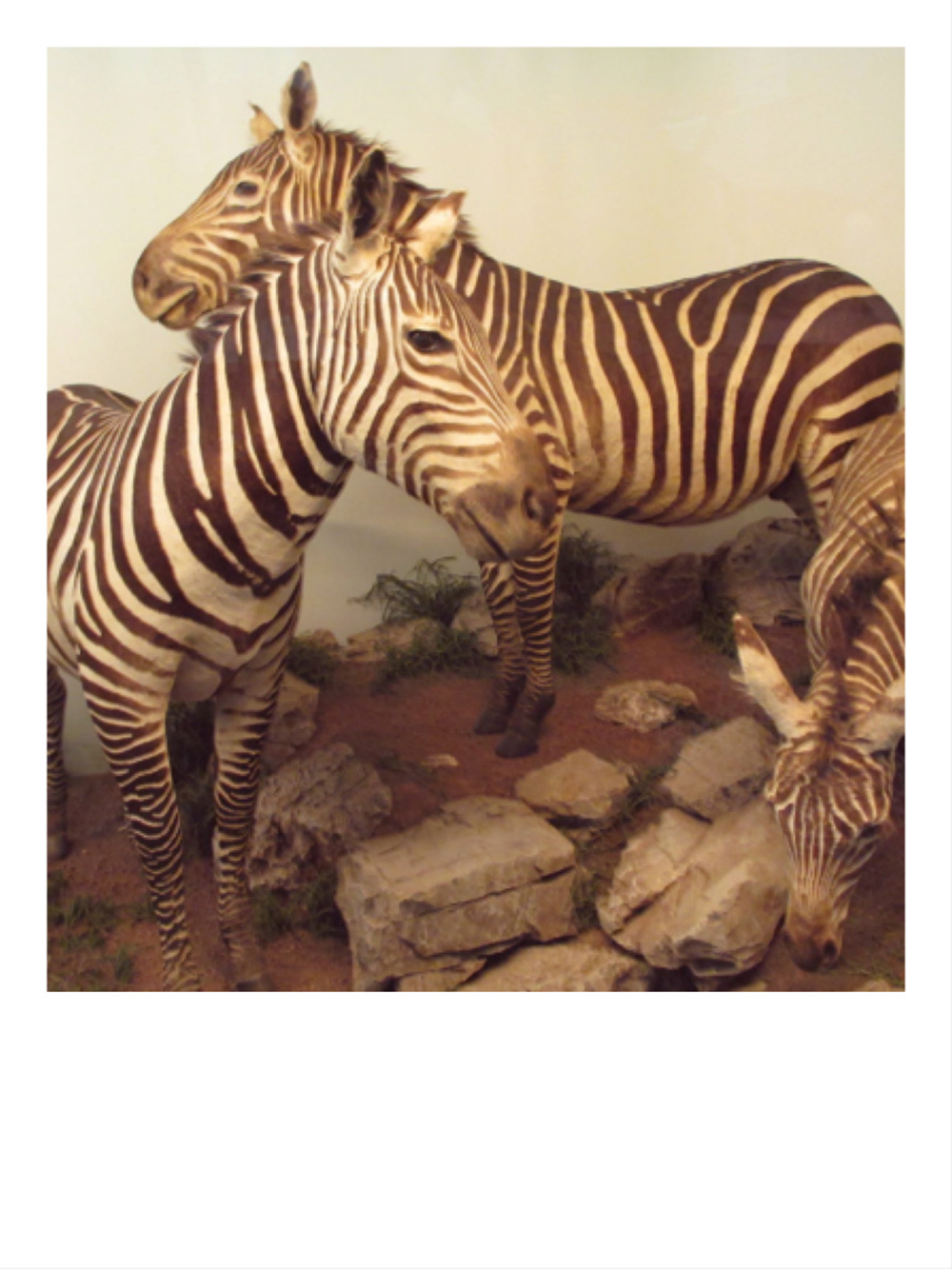 Coda
After five years, the museum reopened at the end of 2018. AfricaMuseum—as it’s now been rebranded—underwent an unprecedented €66 million renovation. The museum still retains its Belgian gaze on Africa, but the focus has otherwise shifted. Contemporary artworks by African artists, for example, now ‘respond’ to some of the egregious items purposely left on display. The collection is mostly intact, as there have been relatively few repatriations, and the final result has been described as ‘un compromis à la belge’—a Belgian-style compromise.

Cologne, 2013
In Museum Ludwig, an old video projector whirs nostalgically. ‘Türken in Deutschland’ (1979), by photographer Candida Höfer, focuses on Turkish ‘guest workers’ in Germany over a period of six years in the ‘70s. She captured them on film, as they posed awkwardly with their families, in their homes, in their workplaces.

‘In a serial and typographical approach, she captured her subjects’ grocery stores and apartments from a distanced, rather documentary perspective: the decorated rooms, full of Oriental pictures and furnishings, are depicted as a surrounding space for the subjects.’—Burcu Dogramaci1

Höfer was interested in the visual changes in German society brought about by these workers, a hyper-visible minority. Most would eventually stay on and become migrants, but it wasn’t necessarily their intention when they arrived. I watch the changing sequence of photos as though in a trance, with little sense of time passing.

‘…In these rooms, the past, present and future intertwine, and the cultural character of the country of origin and the experiences in the destination cannot be clearly differentiated. In these interiors designed by migrants, time and space converge.’—Burcu Dogramaci2

There is something uncomfortable about Höfer’s work, and I feel it; the self-conscious framing of Turkish migrants captured for the purpose of documentary, exhibited in the rarefied space of a museum. But the photographs demonstrate what it was like—is like—to be seen through the eyes of the new society. Being gazed upon for simply existing.

As I watch each of the eighty slides flicker to the next with a satisfying click, I tear up thinking about how often my parents have appeared incongruent with their new surroundings in Australia—and how often I’ve looked out of place as well. 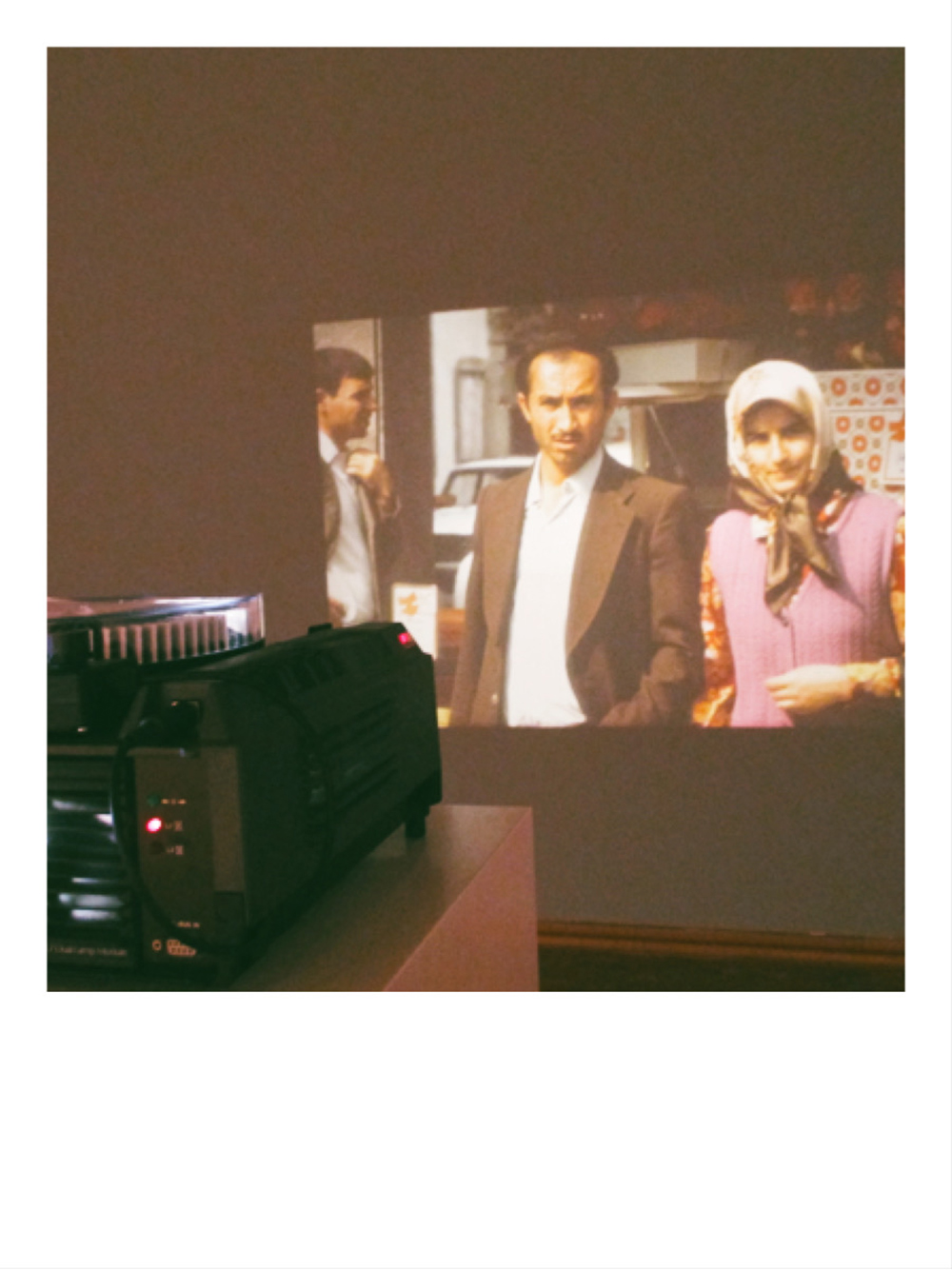 Sydney, 2018
I hear the sound of tiếng Việt. There’s a large group gathered nearby, as well as a man speaking to the woman and her newborn behind the merchandise counter. I’ve been here many times before, and yet I’ve never heard Vietnamese spoken at the City Recital Hall. But, on this night, the sound of my mother tongue is not entirely out of place.

At dinner, I casually mention I am going to see pianist Hoang Pham perform. Mę immediately corrects me, ‘Phạm Hoàng—,’ then pauses. ‘Phạm Minh Hoàng.’ Ba is enthusiastic. ‘Nó nổi tiếng lắm. Nó học ở New York.’ It is a rare conversation in our family repertoire, where the Venn diagram of our musical interests has the tiniest of overlaps.

Up on stage, Hoàng plays deft interpretations of Beethoven, Brahms, Rachmaninoff, Chopin, Schubert. When he picks up the microphone to speak, his Australian accent startles me. Though surely this is how I sounded when I once spoke up on the same stage years before. I wonder how many of us Việt Kiều have been up there; perhaps more than I realise.

The highlight is Hoàng’s rendition of Strauss’ An der schönen blauen Donau—aka ‘The Beautiful Blue Danube’, though an arrangement by Adolf Schulz-Evler known as ‘Arabesques’. It’s more complicated than the original, but Hoàng makes it look easy, as though he was born to play it. These variations on the themes of the original waltz are all that’s left of Schulz-Evler’s musical legacy.

At home afterwards, I listen to those variations over and over again. Then slowly, ever so slowly, I realise that this is what it means to be part of a diaspora: perhaps we are all simply arrangements of sounds from elsewhere, composed long ago. 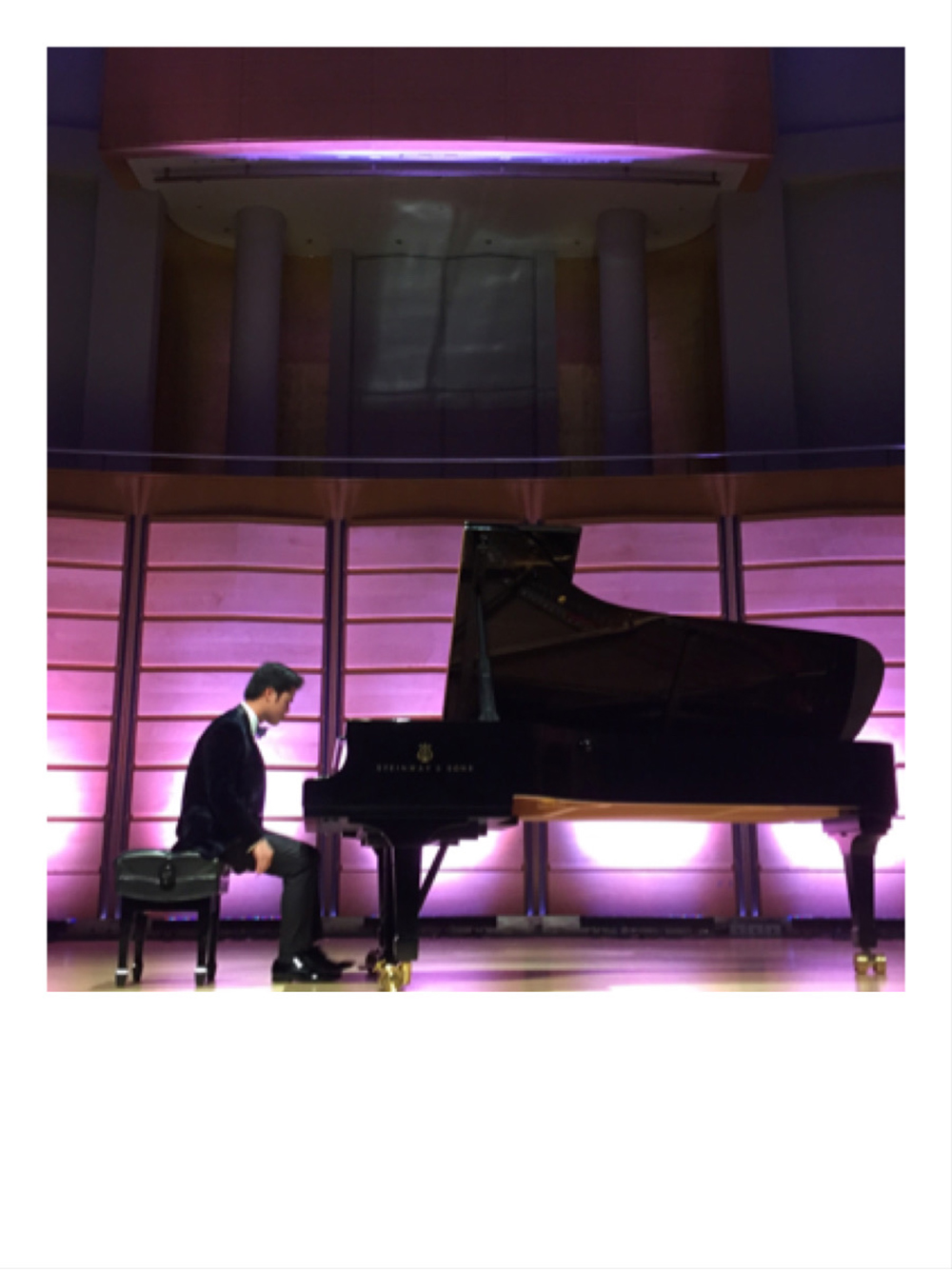