In her current exhibition, Sally Anderson is dealing in metaphor: she is landscape; the landscape becomes her. ‘The earth is a dot’, writes Robert Smithson, and whilst pulling the earth and a dot together allows them to sound as one, there’s still a gap, a breach that comes from placing them side-by-side. Anderson’s paintings nestle into this breach.

The poet Mary Ruefle argues that ‘metaphor is not, and never has been, a mere literary term. It is an event. A poem must rival a physical experience and metaphor is simply an exchange of energy between two things.’ That paintings are poems is a notion I hold dear, and in the works of Beside the point, beside myself, beside you, Anderson has rendered the metaphorical event onto substrate: memories, bodies, emotions merging with seas, cities and valleys. In building layer upon layer, through painting over what came before, Anderson undoes and remakes. We are left with the intimation of the thing rather than its figurative form. Gestures repeat – a thick smear or a blob or a hurried stroke that seems like it might be ink rather than paint, the heavy black-blue stains of a leaky fountain pen. 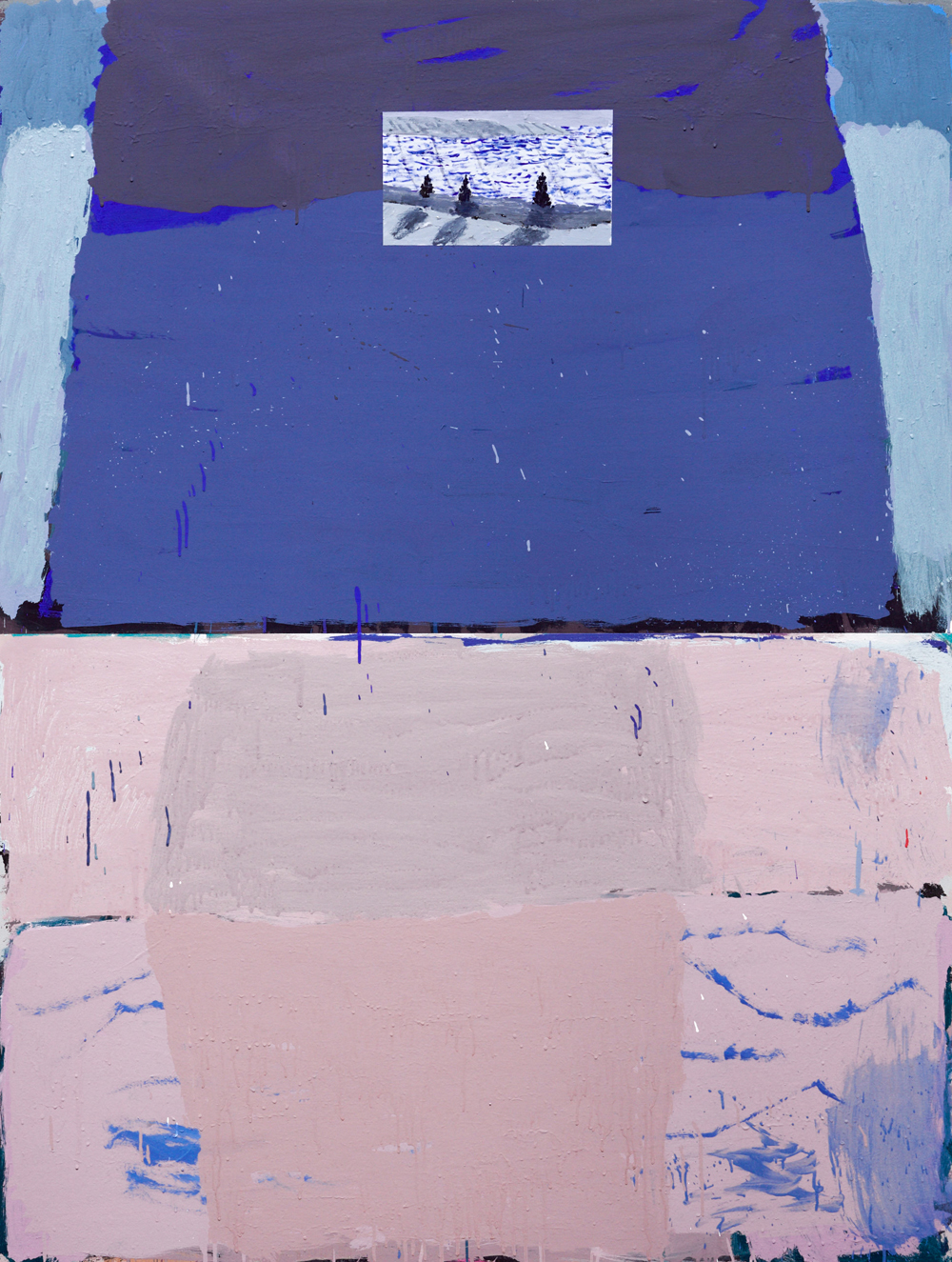 The Point Lookout, Coogee Bay, Swimming in the Same Sea 2017
Acrylic on board
160 x 122 cm
Courtesy the artist and OLSEN gallery

What Anderson’s paintings make me think of: a pail of milk, its smoky white skin set against the metal grey; a childhood memory of Coolangatta that isn’t of the beach but the smudgy black shadows of pine trees; the scores in cement that are revealed by removing a bathroom tile; that the only thing standing in between the ocean and a blue cotton sheet is crushed linen.

There’s a moment in the ‘Lift to Experience’ song Falling from Cloud 9, right after the churning guitar suddenly goes quiet, when Josh T. Pearson sings the lyric ‘slip off your slippers.’ Mostly my whole relationship to that song can be distilled into the sweet ease of that line – the repetition, the four stressed syllables in a row before a tumble at the end. But it’s also the beauty of the ‘l’ chasing up on the ‘s’ and the shy ‘p’ dragging behind. Anderson’s paintings are liquid consonants; they’re full of repeated l’s and s’s, letters that hide between being firmly one thing or another, letters that curl and slant and leap.

They’re in the use of acrylic on board, which runs fast.
They’re in the end of brushstrokes where the bristles show through.
They’re in the slash of matte violet that refuses to give over to a topcoat of grey.
They’re in the two white dribbles right next to each other that have quietly negotiated their symmetrical downward slide.

Tags: acrylic on board, beside the point beside myself beside you, olsen gallery, sally anderson