At the start of the premiere of her performance lecture Corponomy, Eisa Jocson stands with her back to the audience. She is facing a screen, onto which is projected a blank document and the familiar icons of the Mac desktop.

Jocson is backlit so her body fills the screen, and her shadow, magnified and imposing, seems to stare back at the audience behind her. With her arms extended by her side, Jocson starts to lightly bounce – like a sprinter who paces around the starting line before a race, or a boxer jogging on the spot, itching for the fight to begin. Over time her movements become more urgent, still controlled, but building in intensity and focus: Jocson’s body is a sharp coil of tension that seems full of adrenaline, excitement, and rage all at once.

The moment ends abruptly. Jocson moves over to sit at a table, leaning into a microphone and filling the space not with her voice but the sound of her own breath. And with each inhale and exhale, her body reveals rather than conceals the level of her exertion.

As an artist, choreographer and dancer from the Philippines, Jocson is interested in the complex relationship between the dancing body, labour, entertainment, and fantasy production. Over the course of the hour-long Corponomy (a word that combines the corporeal with economy), Jocson re-performs a collection of works that all consider the gendered Filipino body as a commodified site of desire. 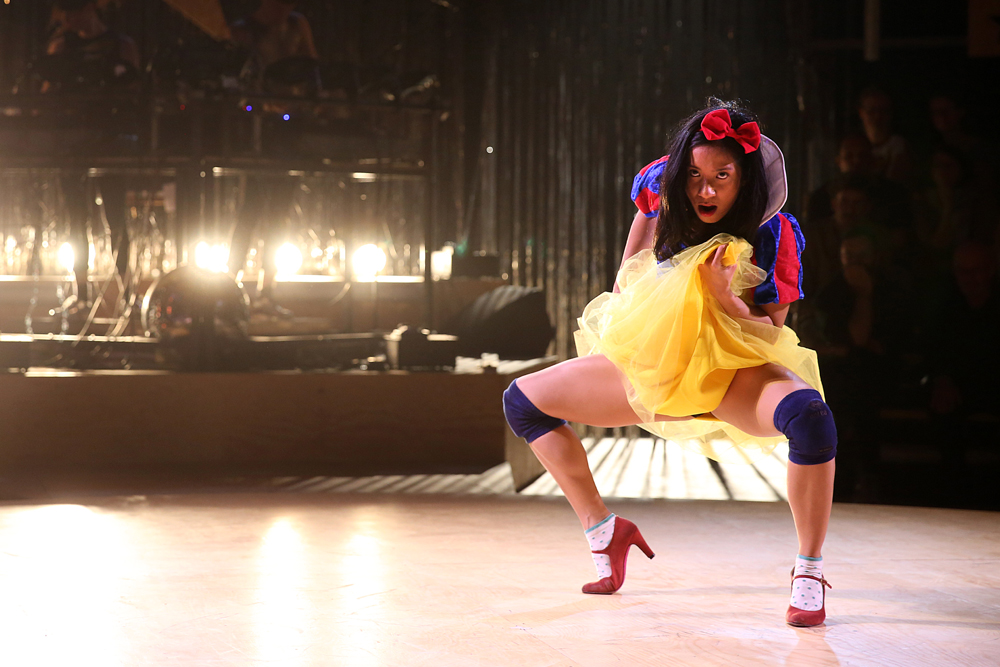 Jocson uses both a combination of screen and live performance, a mode that works well for the hybrid format of the performance lecture – it allows for a level of insight into her practice and research, whilst still being dramatically engaging. We watch Jocson browse through her computer, opening videos, flicking through images and scrolling through short descriptions of each work, before a disembodied mouse takes over and Jocson performs alongside the action on screen.

At one point the YouTube clip of the American ‘Sweaty Betty Ballet Bootcamp Workout’ plays in tandem with her work ‘Death of the Pole Dancer’ (2011). In front of the screen, Jocson mimics the workout before morphing her movement into pole dancing choreography, pointedly blurring the line between gestures that are perceived as hypersexualised and those deemed to be solely for fitness. For ‘Macho Dancer’ (2013), Jocson learnt the specific choreography of ‘Macho Dancing’, a type of entertainment performed for all genders in Filipino nightclubs. In Corponomy, Jocson’s training and research for the project plays out on screen, as she performs her own macho dance to Bonnie Tyler’s ‘Total Eclipse of the Heart.’

It’s momentarily funny and disarming, particularly in its tropes of masculinity (a jaunty finger point, a flexed bicep), but jarring in the collision of gender roles. Jocson’s performance not only reveals a constructed masculinity, but also asks whether the objectified female body can ever be completely subsumed during such a dance.

What’s transfixing about these performances is the way the slightness of a gesture, a minute tilt of the head, can transform Jocson instantly. One moment she is Snow White, complete with wig and red bow for ‘Princess’ (2017), and the next she has returned to the role of macho dancer. None of this is melodramatic or overblown. If anything this appears to be a deliberate refusal by Jocson – a denial of the spectacle or the level of audience expectation when she gaffa-tapes her feet into a black pair of towering platform heels. Instead the bodies both on stage and on screen seem flattened, distanced, removed of their individual qualities. They become Brechtian ‘types’, which serve to not only expose the artifice and systems of power that underpin service entertainment, but also the work, strain and effort that goes into such performances.

Jocson’s body itself becomes weaponised. It is a tool with which she provokes, questioning which bodies are deemed worthy or seductive or in need of protection: which bodies are excluded, manipulated, objectified or considered merely commodities: which bodies are able to be mobile. The success of Corponomy lies in the way Jocson lays bear the stereotypes of the desiring gaze, the way she rejects and refutes this, but most importantly, in the way she prompts a necessary and timely reckoning of our own complicity in just such a gaze.