Jonathan Kumintjarra Brown’s painting ‘Black Rain’ (1995) deals with obliteration: the sky is black, pierced only by thick white stripes of rain and an outline of cloud. The horizon isn’t level, instead it rolls and creeps, reaching upwards to meet the deluge. Half of the canvas has been covered in sand; its grainy texture overlaying the smoothness of the paint. Amidst this desolate landscape is a tiny outline: a small bony figure resting (buried) on its side.

Brown’s work is presented as part of Black Mist Burnt Country, a touring group exhibition curated by JD Mittmann and now on view at Penrith Regional Gallery. Extensive, and at times a little unwieldy in its size, Black Mist Burnt Country reconsiders the history of Australia’s atomic testing program at Maralinga, Emu Field and the Montebello Islands. Beginning with Operation Hurricane in 1952, twelve atomic tests and 550 ‘minor’ experiments were conducted across these sites until 1963. This program forced Indigenous communities from their land, exposed military personnel and civilians to radiation, and laid waste to country.

Desert sand has a particular relationship with the detonation of nuclear bombs. When the first test of an atomic weapon was conducted in the desert plains of New Mexico on July 16, 1945, the heat from the explosion caused the sand to melt, mutating the grains into a highly radioactive green glass. A new geological material had been formed—Trinitite, the perverse offspring of the Trinity Test. But the sand across Brown’s work is the colour of rust, and a small jar of nuclear material collected from Maralinga a dull orange rather than turquoise green. As much as the destructive force of a nuclear weapon is universal, its geological remnants, the outline and shapes of its scars, are specific. 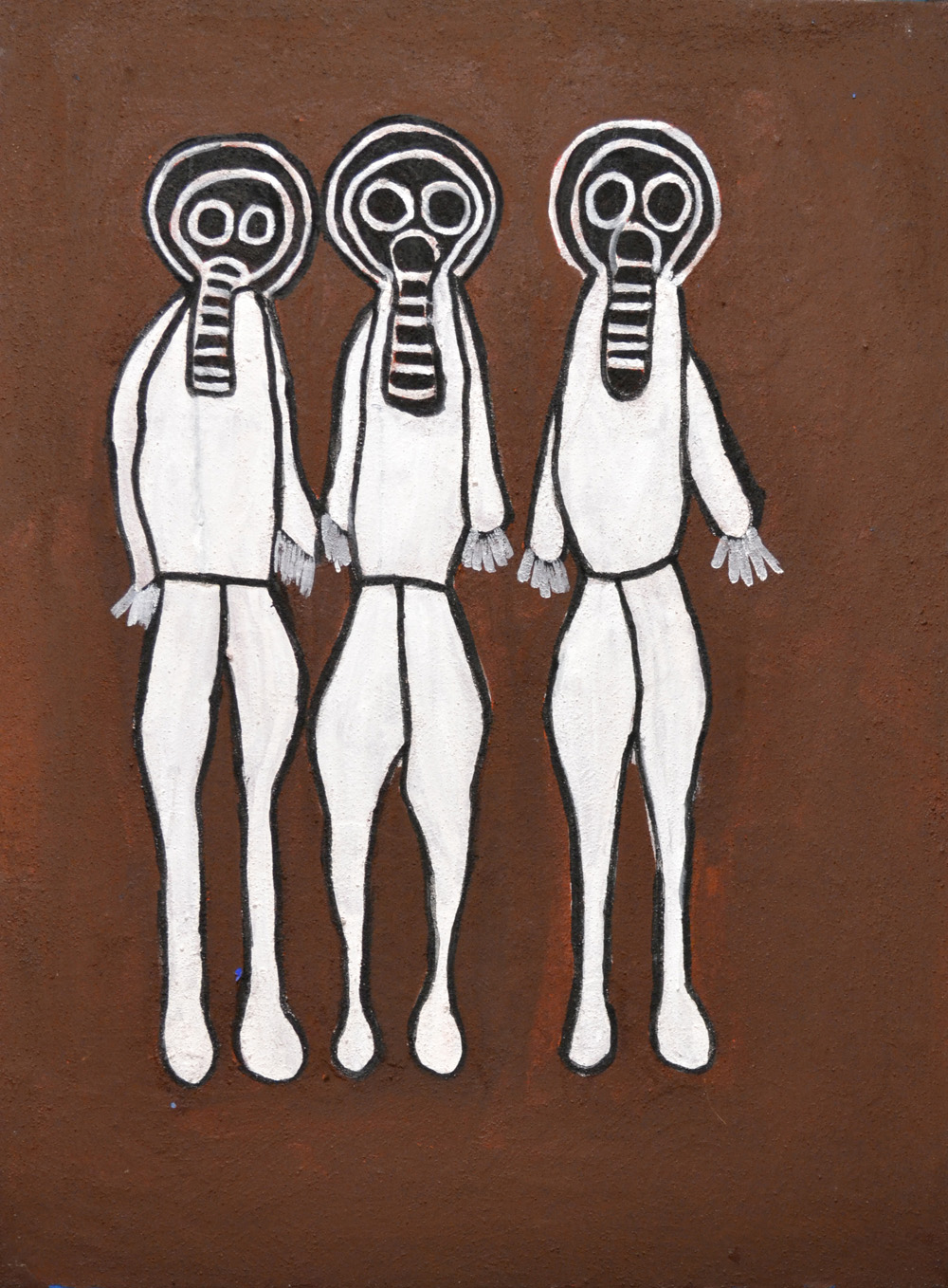 For Black Mist Burnt Country Mittmann has brought together the works of thirty Indigenous and non-Indigenous artists, which displays the substantial breadth of artistic response to these events: not only does the exhibition include work that has been produced over the last seven decades, but also work that ranges across mediums, from painting to printmaking, sculpture, music, photography and new media.

This extensive collection of work demonstrates how often artists are drawn to the history and effects of atomic testing. But, when viewed as a whole, such a presentation also suggests how much nuclear explosions (and their fallout) defy and elude representation: these are works governed by absence, by concealed trauma and veiled contamination. The detonation force of the first atomic test was the equivalent of twenty thousand tonnes of TNT, a force that only increased as testing continued. Radioactive isotopes can take up to 30 to 24,000 years to decay.

How do we fathom the exact magnitude of this? Can we ever fully perceive it in its totality? How do we comprehend an infection of bodies and landscape that appears not only many years later, but also across generations?

Over the course of conversations for Don’t Follow the Wind (2015-), an exhibition curated by the CHIM↑POM collective inside the Fukushima Nuclear Disaster Zone, one woman revealed that her biggest concern was that radiation had no colour: ‘If only everything that was radioactive was red and if only everything that was safe was green, I would have the tools to [go about] out my daily life.’ Black Mist Burnt Country is an attempt to grapple with this form of invisibility, whilst also underscoring its sinister connection to Australia’s colonial history.

Perhaps it is because a nuclear explosion is so unfathomable—it is a force that exists outside the bounds of time and  nature—that we return again and again to the mushroom cloud: an image that is at once ubiquitous, entrenched in our imaginary and absurd, but one still laced with horror, terror and awe. It is the mushroom cloud that unifies Black Mist Burnt Country, whether overtly depicted or not. It is there in Judy Watson’s ‘bomb drawing 1’ (1995), in the faint outline of each cloud, delicate as an egg shell; it is there in the volcanic terror of Hilda Moodoo & Jeffrey Queama’s ‘Destruction II’ (2002) or in the forceful bend of a tree against the setting sun in Blak Douglas’ ‘Tjarutja Tragedy’ (2016); and it is there, too, in the seeping fog of Paul Ogier’s ‘One Tree (former Emu Field atomic test site)’ (2010). 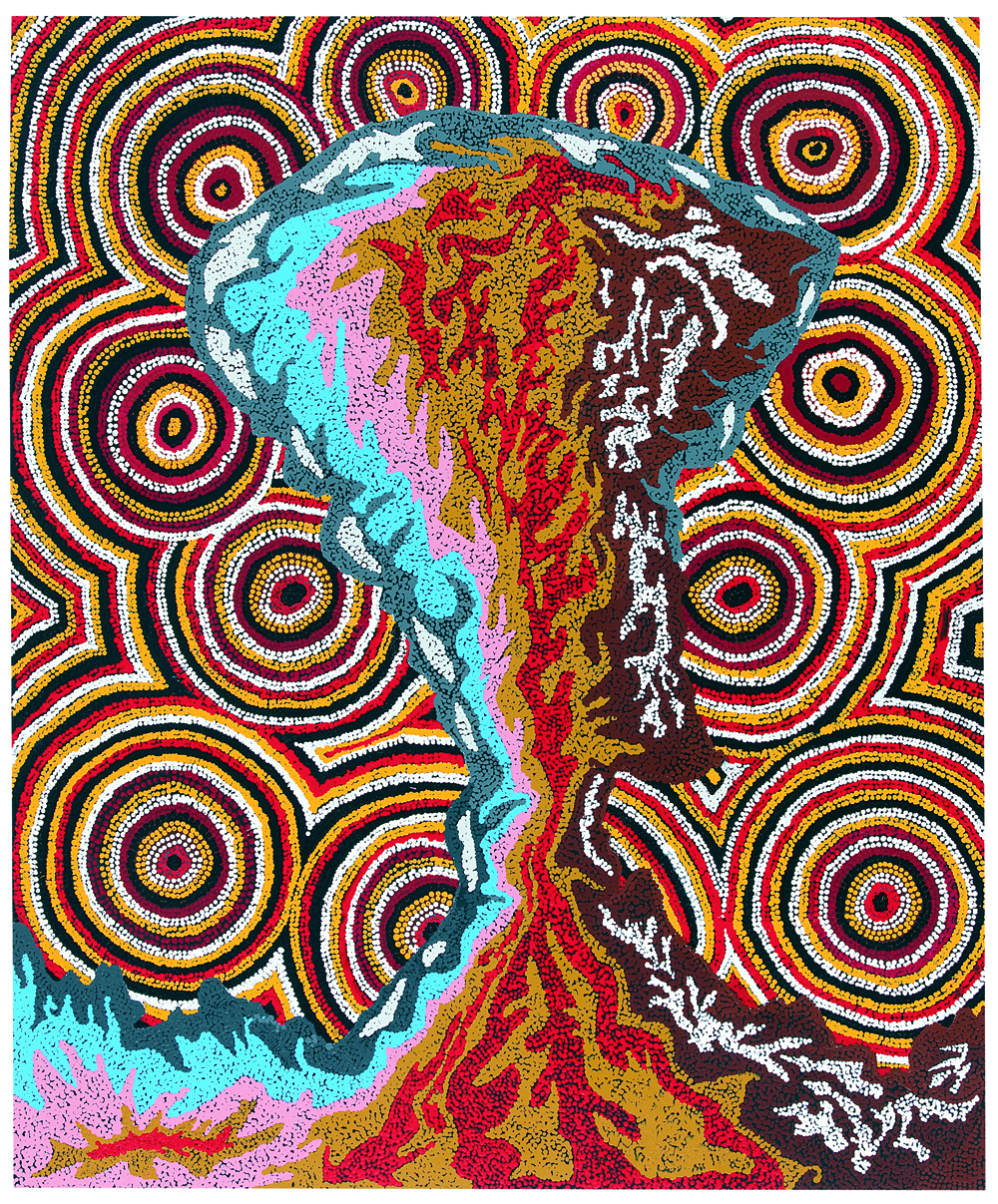 But the country is still burning. And there is a direct link between the first testing of the nuclear bomb and our current ecological crisis—the evidence of nuclear isotopes embedded in geological strata marking only the first instance of humans radically altering the makeup of the planet.

It is often argued that the reason why we don’t talk about climate change, why we avoid its consequences, is that it is too big and too large—it is impossible to see fully. Climate change is another form of total annihilation that exists outside coherent representation. In order to explain it, we must come at it sideways: in the form of tables and figures, graphs and pie charts, in millimetres and half degrees. Like the splitting of the atom, it is a type of smallness that carries with it monumental cost.

Whilst the curatorial intent behind Black Mist Burnt Country may be to remind us of our history, it also has the dual effect of highlighting that (colonial) violence against Indigenous lands, the bodies that occupy them, and the environment as a whole, continues unchecked. And although it seems almost unfathomable to consider a repeat of such careless exposure to nuclear waste, Naomi Klein has already demonstrated that fossil fuels ‘are so inherently dirty and toxic that they require sacrificial people and places: people whose lungs and bodies can be sacrificed to work in the coal mines, people whose lands and water can be sacrificed to open-pit mining and oil spills.’

Black Mist Burnt Country is a necessary and moving exhibition. But images of destruction and environmental catastrophe, of displacement and obliterated country, are not just a feature of our past—they are also our future.