Football becomes an algorithm in Baden Pailthorpe’s new solo exhibition at UTS Gallery. Or rather, a football algorithm feeds moving image art. Data artists translate gluts of information into aesthetic forms—here, Pailthorpe aestheticises an AFL game, tracking the movements of the players in the 2017 AFL Round 23 Swans v Carlton game, before visualising this data in the form of a single-channel work and a 36-channel work.

Artists have long used numerical and mathematical systems as a part of their practice. German conceptual artist Hanne Darboven was one of the first, but Pailthorpe departs from this tradition in that he returns to the illustrative and the representational. It has never been easy to see the artist’s hand in Pailthorpe’s work—his math-oriented approach has always been meticulous, symmetrical and designerly; his subject matter often machine-y and masculine. Now Clanger takes that sensibility to the next logical level.

In a bumpy, glitchy present where Google watches our every digital move, Pailthorpe has chosen AFL as a subject to parse, rather than confront the more angular ideas of privacy, surveillance and control (subjects that have been tackled by many other data artists). From the crowd, he measures stunned silences, dull roars, beers, supporting chants, persistent chants, jeers, hushes and crescendos of anticipation against tied scores, clangers, high tackles, shots on goals, moments where the ball is in flight or passes the post. His thinking follows industrial reality in that the game of AFL—and the assessment of its players/labourers—is increasingly driven by statistics. 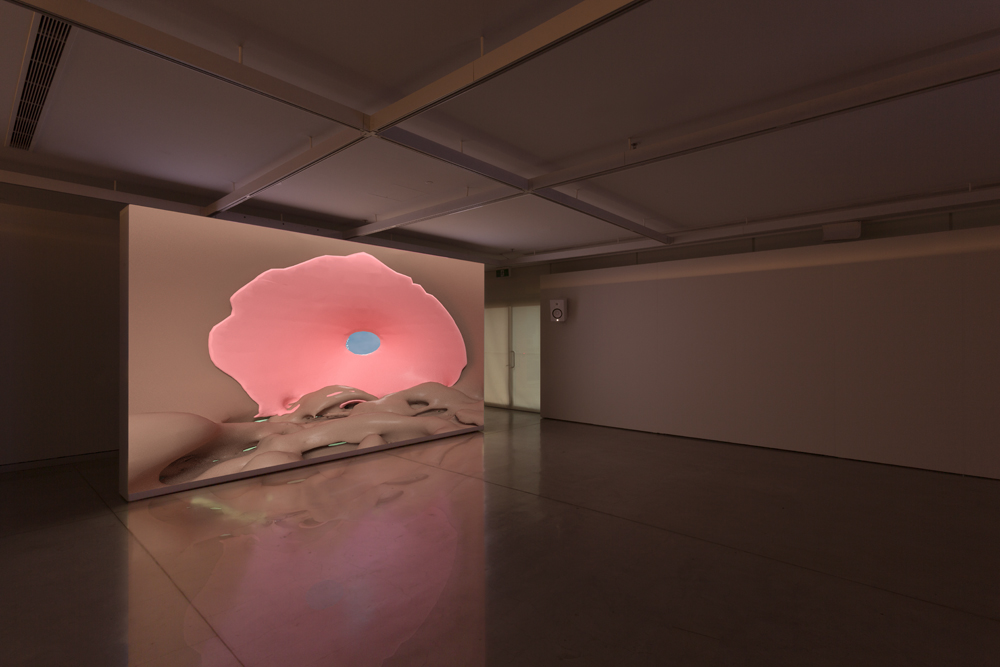 Data is ephemeral, but Pailthorpe has given it high-definition outputs. The images are cool enough, presented in a kind of pink, fleshy, almost sci-fi like form in the middle of a green oval, with the roar of the crowd (represented as dots) pitched alongside an electronic soundtrack by James Brown. We find ourselves inside this pink, slowly mutating form, looking out to a cloudless blue sky, before eventually being given a glimpse of its walls as a linear architectural rendering. The whole single-channel video clocks one full game, in speed.

What does it all amount to, and what has happened to the fates of the number-crunched player-labourers? In data art, precision and elegant problem-solving is beauty. But the artform has to be about more than visualising information and presenting enhanced graphics, seeing beauty and creating patterns—it has to undergo some abstraction. For Pailthorpe, it seems that data and analytics are a gift. Clanger’s aesthetics and presentation ultimately don’t appear to embody any anxiety about the stakes of technological transformation at work in football, or for that matter, elsewhere in the world. It’s telling that a Melbourne writer, Dan Golding, a gaming and media scholar, has provided the essay for Clanger: football has infiltrated that city’s culture far more deeply than in Sydney, and I wonder how the show’s reception would differ there.

A deeper rift emerges: data art is a kind of black-box activity that relies on trust, because the precise treatment of the data remains opaque to the audience.

How exactly is the players’ GPS information transformed into the bubbly forms we see on the screens? If art is routinely a data-borne creation now, and datification a cultural process, these processes remain hidden in Clanger, when really, they might be the most interesting element of the genre’s ascent.

The process of transparently laying out the methodology is one that data artists must confront, else the outputs and source materials remain inscrutable. The audience finds themselves locked out of the process of data interpretation and meaning-making just as the visual language continues to change. Data projects are invariably research projects, and I think that evidencing this process—laying out the rigorous ways in which the inputs were identified for selection, harvested, and then reimagined in visual form—is an important part of connecting the audience to the artist’s thinking.

Data is one of the main discourses in contemporary art—for example, the work of Ryoji Ikeda will soon return to Carriageworks for a third time. In popular culture, too—Google’s viral Art & Culture App, and its use of facial recognition software, crested that wave in the public domain just months ago. Clanger shares this context of the art-science nexus. But its most divergent and, I think, interesting feature is its total disinterest in the existential dimensions embraced by so many other artists working with statistical analysis (as in the work of Michaela Gleave’s recent A Galaxy of Suns). Rather, Pailthorpe finds a mathematical and visual language for the dynamic of on-field AFL play and the emotional responses of the crowd. Perhaps that indicates how this genre of art is limited by the imagination of its outputs, much like how virtual reality, another big discourse in the art of now, is limited by its form (at their least compelling, data art and VR often function as mere demonstrations of their technologies, rather than abstractions of the concrete).

Or perhaps Pailthorpe’s approach indicates how far data art has come. Rather than self-reflexively enquiring what data art means, artists can now delve into the everyday. Art’s landscape is always evolving—beyond the big questions of our media-smart present, data art’s accepted parameters now encircle the activities of barrelling, passing, drop-kicking, marking and tackling.