It’s easy to believe these types of moral panics are unique to our time, but anxieties around new mass cultural forms are not the singular domain of the internet age. Eighteenth century cultural commentators were concerned with the threat reading novels posed to youth. They spoke of reading ‘addiction’ and reading ‘mania’—reading was pathologised in much the same way as our ‘addiction’ to digital media. As with all fears about the rapid uptake of new technological forms by young people, the rise of the novel and the democratisation of reading felt like a threat to the old social order, inspiring a reactionary backlash that is familiar to us today.

But like all forms of mass culture, the social and cultural impacts of TV are more nuanced and contradictory than moral conservatives—or their progressive counterparts—would have us believe.

This ambiguous social and cultural space is where Daniel Mudie Cunningham lives. The golden thread running through his practice is an ongoing aesthetic and ethical negotiation of the pop cultural archive filtered through the cool, ironic gaze of a critical theorist, and animated by the almost hysterical enthusiasm of a fan. Cunningham—both as an artist and a curator—is concerned with the political implications of the ways in which identities are produced in and through mass visual culture.

The TV Show, now on view at Wollongong Art Gallery, is the latest iteration of this theoretical project. Cunningham has curated eight early and mid-career artists with diverse cultural backgrounds into an exhibition that showcases how personal experience is intimately connected with the larger social and political structures that shape it.

Liam Colgan’s video of the artist dancing (‘Caught in Reflection’ (2014)) plays adjacent to a mirror propped against the wall that is adorned with shredded denim and chain (‘From Looking To Feeling’ (2018)). The mirror stands as a type of relic from an adolescent bedroom, reflecting the secrets of a teenager’s narcissistic fantasies. The endless video loop of Colgan practising music-video-inspired dance moves suggests a young person’s repetitive demands for attention: ‘Look at me!’ But Colgan’s work is also emblematic of the overtly political ways our identities are themselves performances in a world where we all have an audience—ones that we can try on for size, like clothes in a dressing room, and ones that others dress us up, in order to style us in their own image. 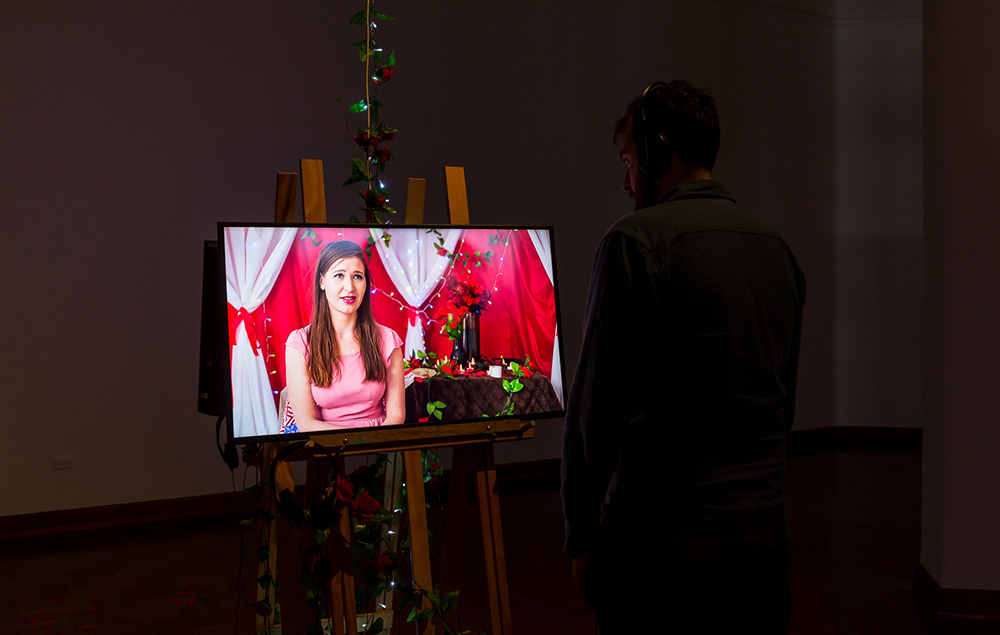 Giselle Stanborough’s ‘Pleasure Drill’ (2018) is a two-channel video inspired by the artist’s many failed attempts to become a participant on the hit reality show, The Bachelorette. Her long-time preoccupation with the show ironically mimics the dogged quest for love that consumes the contestants. Stanborough’s work embodies the contradiction at the heart of the very concept of reality TV—what is real and what is for the camera?—and reframes it as a broader existential question about the nature of truth and identity in an infotainment world.

In ‘Marathon (Black Mirror)’ (2018), Sara Morawetz documents her binge watching of the acclaimed spec-fiction series. The multiple images that constitute the video of reaction shots capture a range of her emotional responses to this marathon viewing session. Morawetz’s work reminds us of the way feelings can have the rehearsed quality of a movie audition: ‘act happy’, ‘act sad’, ‘now act surprised!’, ‘cut!’ By reducing her own set of experiences to a media production, the artist exposes the way in which even our own private emotional states are never simply a ‘natural’ expression of our inner world. Instead, what Morawetz is suggesting is that every aspect of who we are is shot through with the cultural forces that shape us.

The work of JD Reforma engages the phenomenon most often blamed for clogging the arteries of culture and constricting the blood flow of taste and decency: the Kardashians. In ‘Gender Reveal’ (2018), the artist recreates the oversized floral wall the Kardashian women have used as an Instagram-ready backdrop for their baby showers. It’s now so iconic that fans use it as a stage set for their own lives, creating a version of themselves fit for public consumption. Reforma’s work recognises the value of this banal bit of decoration as a cultural object, symbolic of the way these reality TV superstars are nothing more than blank screens onto which we project ideas about ourselves to the world. 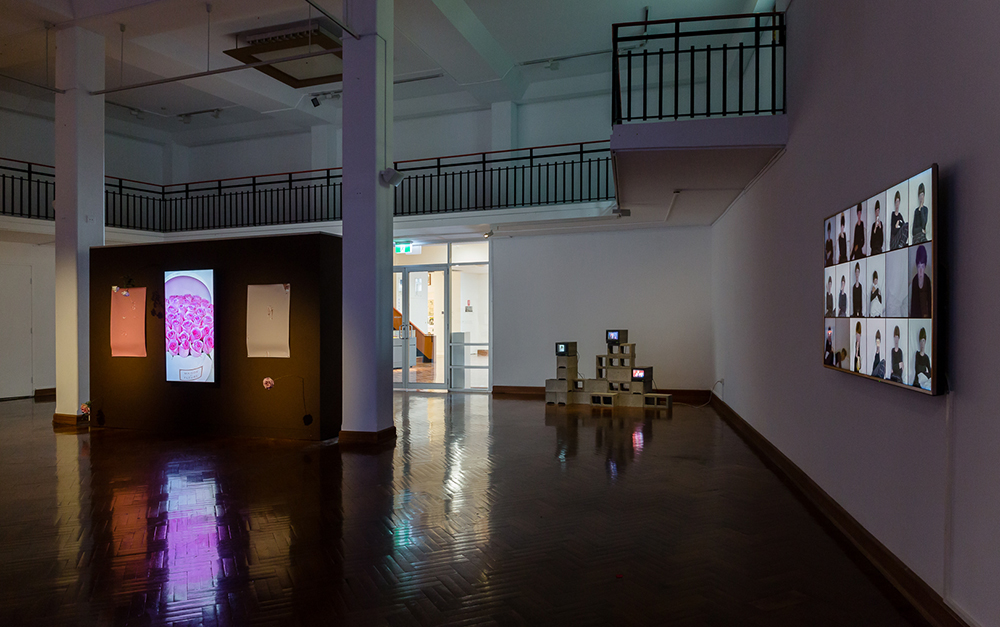 Liam O’Brien’s extended video work—’Empty Avenues (Best of Season 1)’ (2018)—is perhaps the most explicitly concerned with the question of identity. By recoding his own life in the formal language of the TV sitcom, O’Brien reveals some bleak existential truths. The Kafkaesque situation comedy considers the ways in which our own sense of self is always, already implicated in the dominant cultural narratives about identity that are mobilised via the mass media. It also gestures towards the possibility of counter-narratives that could subvert this prevailing order from within by employing its own commercially produced strategies of manipulation.

All the works in The TV Show consider, in different ways, the ethical and political implications of the blurring of information and entertainment in mass visual culture. As an exhibition, it demonstrates the way in which—for this generation of media savvy contemporary artists—the seductive visual power of TV can be harnessed to critical effect. Through a clever use of the techniques of the medium, and an often artfully ironic relationship to its contents, the material drama of the show reveals the possibilities and limitations of the performative nature of our identities through the theatre of the mass media.