Mating (2019) is a documentary that screened as part of Hyperlinks Festival in February.

The film, directed by Lina Maria Mannheimer, follows two millennials on their online dating (mis)adventures, and their relationship is laid bare. Delving into how identity is often constructed online—sometimes to an obsessive degree—Mating explores how technology and performativity influence conversations and relationship-building.

What interests us the most is the form of the documentary. Mannheimer tracks both the potentiality and the pitfalls of online dating via the couple’s Skype calls, screen recordings, Snapchats and more.

Here, we evoke this online connectedness and performance to discuss the film and our own dating experiences.

@mikezzsun:
Every morning for the past two months, I wake up, open Tinder, then Hinge, then—depending on how lonely or desperate I am feeling—Grindr. I spend exactly five minutes on these apps, which is the longest stretch of time I can think about online dating before I begin to feel too lonely or desperate, even though that is exactly what I am. I tell myself, ‘five minutes a day adds up; in a year, I will have spent thirty hours swiping, almost a full working week devoted to finding the perfect mate.’

@itzafunnygrl:
I downloaded Tinder when I was nineteen, during my first trip to Melbourne. Even though I was only travelling interstate, I felt a desire to emulate Julie Delpy’s peripatetic heroine in Before Sunrise (1995). The embarrassment I associated with dating apps evaporated—I was travelling someplace new, so I wanted to meet someone new; someone who had grown up on different soil, with different experiences. I wanted to have long, rambling conversations in unfamiliar bars like a real adult. So, I ended up going on a date. He bought me a vodka orange and we awkwardly reminisced about CW’s Smallville (2001-11). The vodka mixed badly with the king-sized pearl milk tea I had drunk earlier, and I excused myself. When I got home, I used Tinder for two more weeks, until an exec member of LawSoc showed me a screenshot of my profile in person and laughed.
I deleted it immediately.

@mikezzsun:
There’s something magical about online dating in foreign spaces that doesn’t quite exist at home. Sure, there’s the opportunity to meet handsome strangers, but also the rare chance of re-inventing yourself. This isn’t to say I’m not manipulating my image in Sydney (on the contrary, I’m constantly thinking about how to hyperbolise my best qualities and diminish my worst), but, when I’m away, the risk feels lower. There’s no danger of being seen—and evaluated—by an acquaintance. There are no LawSoc execs around to laugh!

In Sydney, dating is a chore, even if only for five minutes a day. But, when I went to New York last December, I would spend hours on Tinder or Hinge. I’d try on different personas, flirting and teasing as I saw fit, imagining myself in any number of narratives, with one caveat—I had to remain online. When it came to meeting in person, I always made up some half-baked excuse. I’m too tired and under the weather. Or: my friend wants to go out tonight and it’s the last time I’m seeing her for six months. I knew I couldn’t live up to the personalities I had so meticulously constructed. 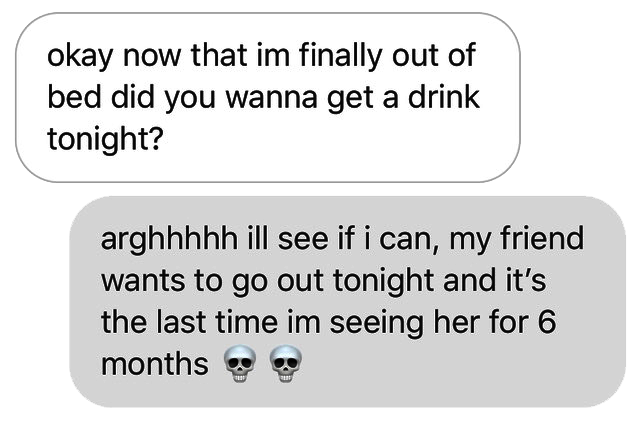 @itzafunnygrl:
The lack of danger, the sudden agency over your own identity and how it’s perceived by strangers—it feels like a form of absolution. It’s why, every time I’ve travelled since, I’ve re-downloaded the apps. But, in Tokyo, I was suddenly confronted with my own subconscious form of narrativisation. One match asked me flat out why I was on the app while on holiday. 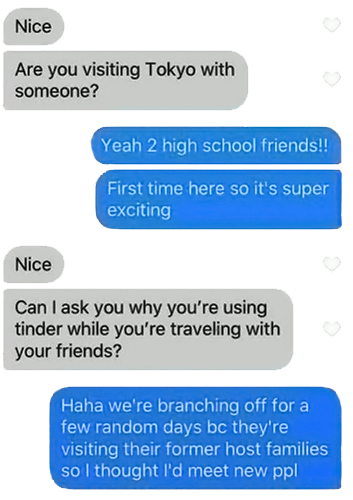 Another match, who had travelled four hours to see me, stared at me blankly when I said it was time for me to return to my Airbnb. Alone. That horrible moment of stasis, when I realised my profile—a persona that was carefree, spunky and looking for a good time—had engendered certain expectations in others.

@mikezzsun:
When I watched Lina Maria Mannheimer’s documentary Mating, I thought about this idea of expectation almost obsessively—whether the persona I was broadcasting on dating apps (and social media at large) was an accurate representation of myself, whether it was deceitful to present an identity that strayed too far from my own, or whether it even mattered at all. 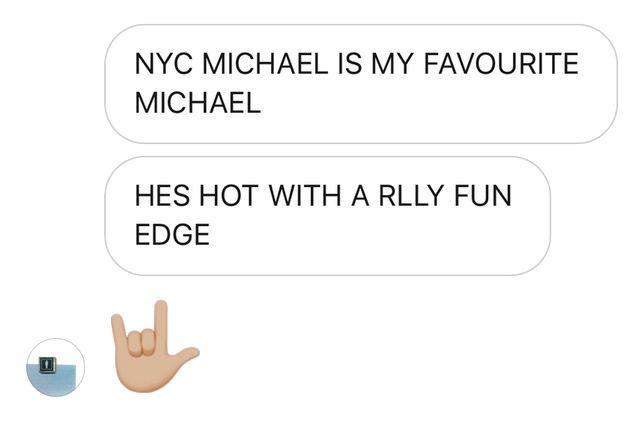 In Mating, two millennials—Edvin and Naomi, living in separate Scandinavian cities—agree to participate in a social experiment around ‘the digital generation’s view of relationships’, as a title card claims. They agree to be surveilled by Mannheimer, handing over access to their apps, their phones, their lives. Mannheimer installs high-tech webcams to film their Skype conversations. Each participant is directed to shoot footage of their own lives. But, when Naomi’s camera malfunctions, Edvin goes to help her. They spend the night talking, and exchange 3000 messages in 8 days. Before you—or even they—know it, they’ve become invested in each other.

@itzafunnygrl:
What follows is a fraught, quasi-romantic friendship right out of a Sally Rooney novel. Intimate late-night chats manifest in the form of split screen webcam windows, where Naomi and Edvin use their grainy connection to coach each other on their dating travails, trade new year’s resolutions, or lament their difficulties with sex. Mannheimer gets a lot of comedic mileage out of the film’s multimedia format: in one scene, the virginal Edvin articulates a sexual fantasy using a crude diagram on Photoshop. ‘That’s me talking,’ Edvin says, drawing a speech bubble above two copulating stick figures. ‘It’s an order.’

When Naomi goes to visit Edvin in Amsterdam, this platonic camaraderie becomes charged with a bolt of romantic tension. The film melts into montage, a series of hazy, dusky scenes speckled with city lights, as the pair eat grapes on rooftops, climb through graffitied nooks, and kiss as the clock tolls midnight. When they part, it’s an emotionally electric scene—Edvin films a forlorn Naomi standing at the door of an adjacent train, framed by a yellow oval of light. Slowly, then all at once, the two trains judder away from each other.

When I initially watched the scene, I was moved. But the feeling evolved into a fixation on how pre-meditated the shot felt, how oddly polished. The documentary initially promised a naturalistic, real-time look into how technology shaped the dating habits of young people, but these scenes evoked a sense of the grand romantic idealism mostly found in rom-coms.

@mikezzsun:
That Mating manages to find beauty in mundanity isn’t jarring in and of itself. This kind of narrativisation is now rife in everything, from YouTube vlogs to reality TV, which transform small, domestic moments into grand arcs with their own distinctive climaxes and denouements. But how much do Edvin and Naomi lean into that narrative? It’s hard to shake the suspicion that the film’s most candid moments have been massaged by their desire to turn their own lives into conventionally digestible stories—ones that follow the same narrative techniques Mannheimer uses to arrange years of footage into ninety minutes of viewing pleasure.

After the couple’s week together in Amsterdam, Naomi’s anxieties surface. She begins reading into their relationship, translating each of Edvin’s actions into evidence that he doesn’t love her, that she is inadequate, that they are incompatible. ‘The feeling of being important, desired, is a hard one to pinpoint,’ she writes, but she tries anyway, producing an exegesis of emotions over thousands of words: 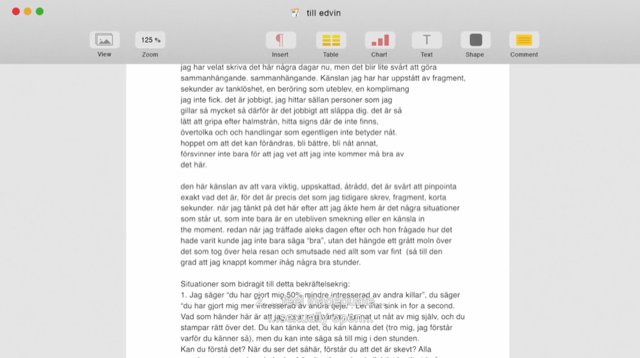 There’s both artifice and genuine vulnerability here—it encapsulates, perfectly, the murky boundaries between real and performed, obscuring the extent to which Naomi has fashioned her on-screen persona. The act of typing out heartbreak organises something infinitely complex into a linear story arc, as if Naomi is trying to convince us—and herself—that her decision to break up with Edvin is justified.

But does narrativising emotions detract from their power? I’m not so sure. Naomi’s letter may be melodramatic, but her heartbreak is real.

@itzafunnygrl:
Dating someone new can often feel like a game of strategy: a perilous balancing act between the types of artifice and vulnerability we see reflected in Naomi’s letter. Every piece of truth you choose to share—like the local suburb you buy fried chicken from—generates assumptions, sets the tone for each flirtatious (and potentially problematic) tangent. But the barrier between performativity and our inner selves is more porous than we assume.

In Mating, Edvin begins the film clueless about sex and how to present himself. ‘I don’t know how to be sexy,’ he says sheepishly. At another point, he states: ‘I’ve never imagined anyone looking at me, thinking: Shit! I’d love to take him home for sex.’

Luckily, Manheimer bestows him with Naomi’s friendship, a source of constant, garrulous confidence. Naomi advises Edvin that he’s ‘sexy when [his] face is dead’ and that his ‘ass is totally wicked.’ It’s implied he loses his virginity to her. She opines about the appearances of his Tinder matches, and the tone of his messages. Adding to that constant sense of cinematic narrativisation, these personas continue to mirror rom-com archetypes, this time gendered ones. Edvin evokes a long tradition of hapless, pining unpopular boys, found in classics like Pretty in Pink (1986)and 10 Things I Hate About You (1999). Meanwhile, his dynamic with Naomi reflects the central relationship of Can’t Buy Me Love (1987), wherein a nerd enlists a cheerleader to teach him the ways of popularity, and is rewarded with her love. 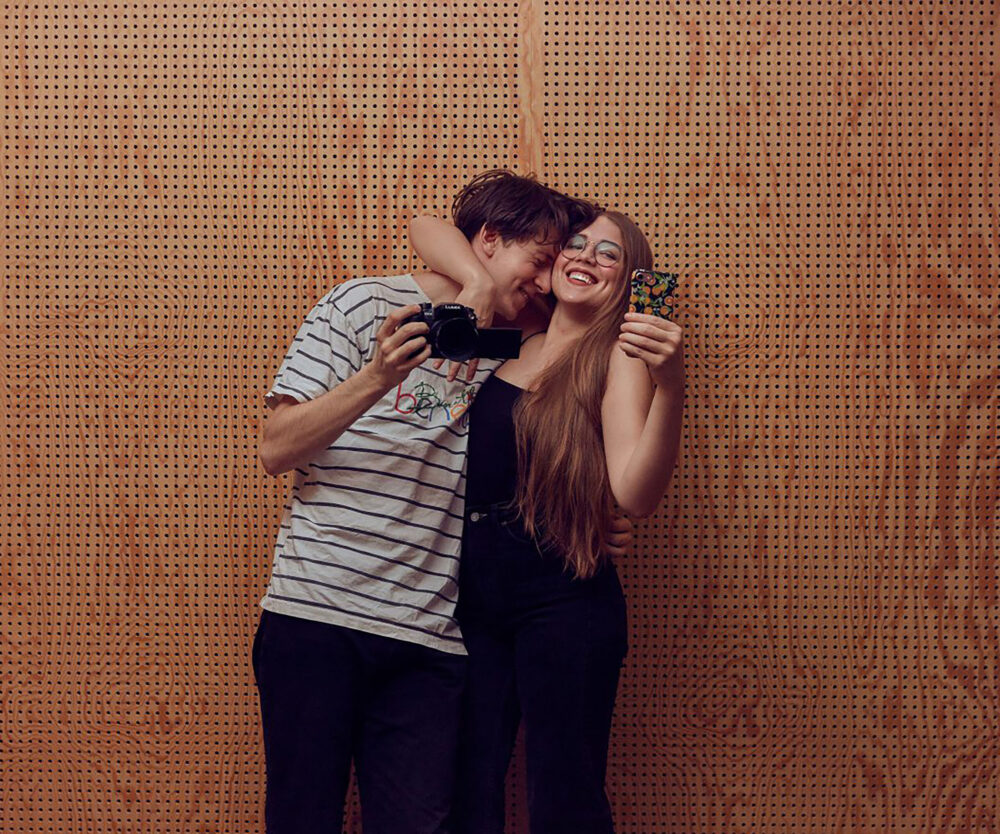 @mikezzsun:
Edvin performs both for the camera and Naomi until he has internalised his new identity—the fake-it-til-you-make-it school of thought. But, as much as his outwards performativity gives him a new self-confidence, it also muddies his ability for nuance, pushing him constantly towards easier solutions and fixed narratives instead of reckoning with the messy threads of reality.

By the end of the documentary, Edvin has moved to Singapore. The couple have broken up twice, but miraculously—perhaps due to the forced contact necessitated by the documentary itself—they have managed to stay friends. Naomi goes to visit him for the new year, and it passes by in a blink: a blur of celebrations, fireworks, running through pouring rain.

Suddenly, it’s time for their farewell, and it’s here that Mating most closely imitates the overly neat endings of its fictional rom-com counterparts. As Edvin and Naomi share an intimate goodbye in an airport, Mating suggests the possibility of a rekindled bond. ‘Love you,’ Naomi says, kissing Edvin’s neck. One might imagine an impassioned monologue somewhere down the track, a romantic reunion, a lifelong partnership, a sequel.

Life, though, is more complex. As the film ended, I found myself scrolling through Edvin and Naomi’s Instagram accounts for any hint of how their story continued. 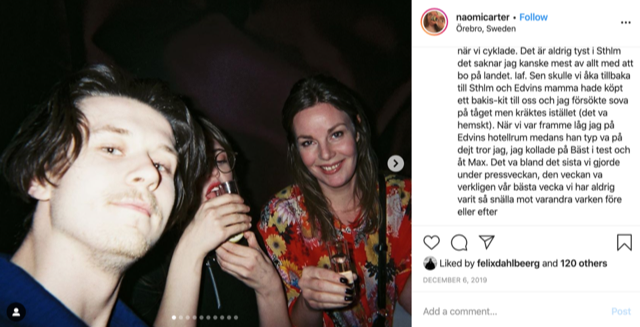 It has now been four years since production began, and Edvin and Naomi seem to be best friends, or maybe a little more—an indefinable space between platonic and romantic connection. In a post from December 2019, Naomi writes of their time spent together for Mating’s premiere: ‘That week was really our best week, we have never been so kind to each other, neither before nor after.’

@itzafunnygrl:
I often think about these brief swatches of affinity; these people that I’ve come into contact with for a few moments—a coffee date, a brush of skin, an exchange of pixelated words—only to never see or hear from them again. They only exist in funny screenshots stored in my phone, fossilised in memories that I, myself, spin into elaborate narratives in writing like this. Attempting to glean meaning out of something too quick to be bottled.

@mikezzsun:
Maybe Mating resonated with me because I, too, am prone to ascribing meaning where none necessarily exists. Even though online dating is onerous, even if I only spend 5 minutes a day on it, I still feel myself being sucked into assumptions and over-interpretations. I can plan out new versions of myself, entire lives with someone based on one glance at their first photo. Will we be happy? I wonder. Will we be kind to each other?