In one of the opening scenes of Billy Wilder’s archetypal film, Double Indemnity (1944), the protagonist Walter Neff walks around an unassuming living room typical of the late 1930s. He strolls nonchalantly past an armchair and two everyday lamps, but an ominous feeling still pervades the scene. A long shot frames Walter, causing the shadows of the nearby venetian blinds to fall dramatically across his body. This is how we are introduced to Walter—with a single symbolic shot that foreshadows his fate in prison and suggests an ambiguous slippage between the role of hero and villain.

Haegue Yang’s installation Lethal Love (2008), now showing at the Museum of Contemporary Art as part of the Sydney Biennale, seems to recreate this mise-en-scene with its maze of hanging Venetian blinds. Diagonal shadows stripe the faces of visitors as they peer through the gallery space, or whisper in the shadows. But as the minutes pass, a roving spotlight finds them, causing a sudden pause in the conversation. Brief bewilderment ensues underneath such harsh illumination; surreptitious, clandestine encounters are ruthlessly exposed.

It is precisely Yang’s exploration of the ambiguous binaries between private and public, the illusory and the material, that makes Lethal Love such a compelling interactive work. The conjoined or intersecting blinds create private spaces and transitory moments of solitude, but these still remain part of the public arena of the gallery. This feeling of contrast is further heightened by the two scent emitters that hang on either side of the installation, which release smells labelled ‘Wildflower’ and ‘Gunpowder’. Here the olfactory and the visual collide, and we become aware that although blinds allow speech and even smell to pass through, they also simultaneously act as barriers, filtering the odours and the words. 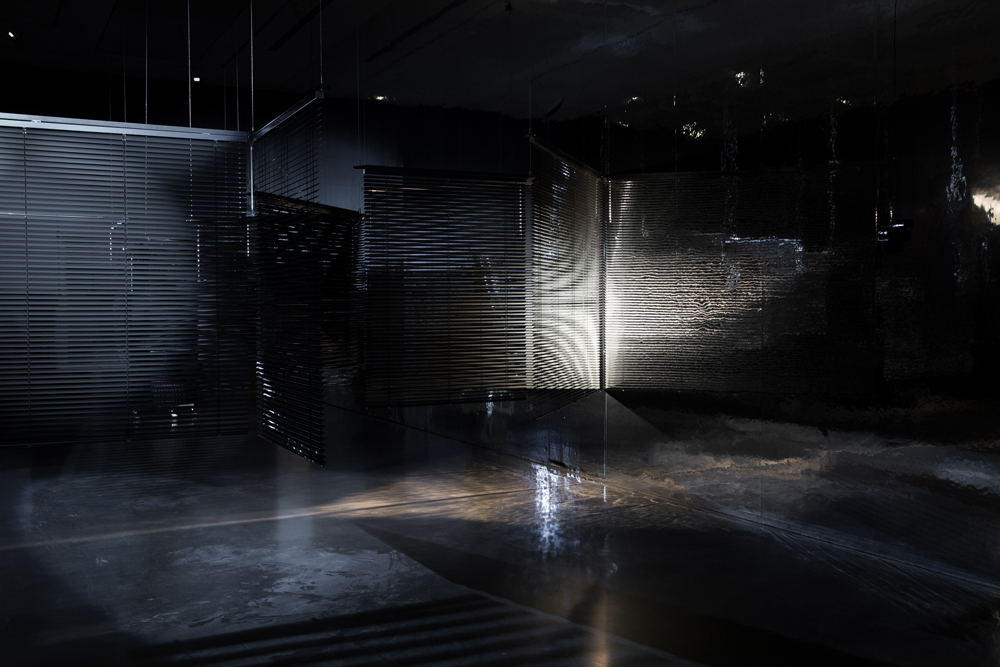 Yang’s imbrication of personal life with public history takes inspiration from the life of German activist Petra Kelly.  In 1992, the Green Party leader was shot while asleep and it is speculated that her partner at the time, the politician and German military officer Gert Bastian, was responsible. That Kelly spent so much time in the public spotlight (reiterated here with the installation of a literal roving eye) is at odds with her private turmoil, provoking the question: do we really know our public figures? Do we really know each other? The entire back wall is covered by a cloudy mirror that, like the blinds themselves, reflects and distorts. We are never really ‘seeing’ or ‘looking’ fully—all the elements seem to veil and conceal, exposing only partial views.

But after all, is this not the nature of looking itself? As Mieke Bal has suggested, ‘the act of looking is anchored in the body and thus profoundly ‘impure’.’ It’s possible to see the slits in between, qua plastic blinds, qua object, as representing the ever-present interstices between perception and knowledge, visuality and truth.

Whenever we crane our necks, lower our bodies and shuffle around, we are reminded that the act of looking is being constructed, framed, and controlled: the slits of the blinds become apertures, and in doing so suggest the contrived apertures of our own eyes.

But Lethal Love is more than a comment on the elusive nature of knowing others and ourselves—it’s also interested in the fugitivity of intent, meaning, and looking as part of the fallibility of the eye. In Yang’s work, we see (through the blinds), we feel (the waxing and waning heat of the spotlight), we hear (the rustle of other people’s movements), we smell (flowers and gunpowder)—but in such a controlled sensory environment, are these observations reliable?

Whilst Yang’s work relies heavily on sensory experience, the curatorial decision to exhibit three of Yang’s works together detracts from the potency of one work alone. Here Yang’s Lethal Love (2008) and Video Trilogy (Unfolding Places, Restrained Courage, and Squandering Negative Spaces) (2004-2006) and The Intermediates (2015-ongoing) are all displayed as a multi-part installation, with her video essays embedded into one of the venetian blinds. Whilst it’s possible that they may be interrelated, Video Trilogy embodies a narrative approach that runs counter to the abstracted history of Lethal Love. That is to say that the narrative voice of Video Trilogy continuously impedes on the experience of wandering through Lethal Love, which then creates a confusing amalgamation of sensations. 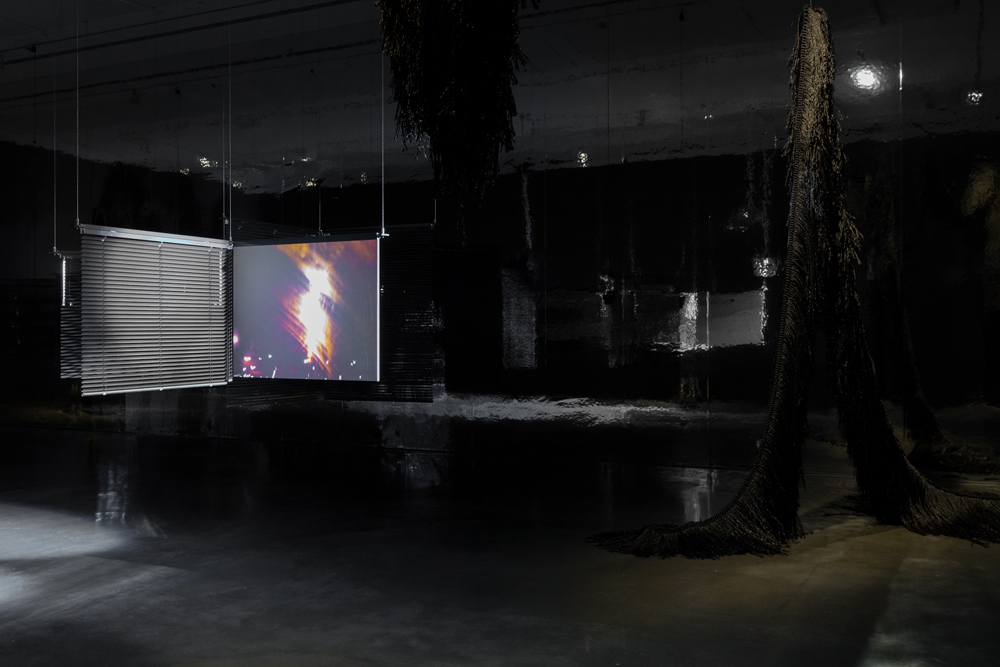 In Video Trilogy a number of voices describe the experience of diaspora and homeland. In particular, Yang recalls intimate details of living between Seoul and Berlin. It is too easy, then, for visitors to wonder whether Lethal Love, like Video Trilogy (or even part of Video Trilogy) is merely Yang’s rumination on place and identity as a Korean artist abroad. Curated as one entity, viewers are encouraged to see the complex works of Haegue Yang through this single dimension. Whilst Yang’s identity as a diasporic Asian creative is key to several of her works, it does not define them all, and it certainly must not overshadow the nuance of her entire practice.

In contrast, Lethal Love is seeking to un-do this type of hermeneutical finality. Yang eschews the attempt to inscribe set categories and meanings, instead working to erase narrative and identity politics altogether. Like Billy Wilder, Yang seems to be more concerned with the processes of probing and the depth of doubt. Like Double Indemnity’s Walter, we find ourselves in Yang’s theatrical set, constantly questioning and left only with the lingering certainty of aporia. Like Walter, we are suspended in the tension between light and dark, oblivion and enlightenment, Wildflower and Gunpowder.