In a half-darkened space at Blacktown Arts in Western Sydney, you see two vests hanging on the gallery wall. They are reminiscent of the vests worn by suicide bombers, and a few grenade-shaped objects protrude from the pockets. Salt from another pocket has been poured onto the floor. Above the vests, Arabic words are lit up in neon. But these garments do not hold the same objects that caused explosions to rip through crowds in Kabul, instead they are revealed to be pomegranates and an Arabic poem by the Syrian poet, Nizar Qabbani. ‘Love me beyond my city,’ writes Qabbani, repeating an inscription found on the ruined walls of buildings in Damascus—an offering of hope to a city devoid of hope. Elyas Alavi’s ‘Naan, Salt, Pomegranate, Nafas’ (2018) mixes poetry and materiality to invoke a plea for peace. Alavi, an Afghan refugee and poet, was inspired to create this work in response to the ongoing suicide attacks in Afghanistan—each attack bringing with it renewed sorrow and fear for his family’s safety.

Alavi is one of seven artists featured in Daneha (seeds), an initiative of Blacktown Arts that seeks to tell the stories of Afghan refugees settled in Blacktown: narratives not defined by horror, but by a positive affirmation of agency, identity and experience. Curators Paul Howard and Maria Mitar have brought together the work of refugee artists based locally, nationally and internationally, resulting in an exhibition that is profoundly personal, latent with memories of loss and trauma. But although these works display private responses to the condition of displacement, they are also weapons for challenging the narratives that underpin the prevailing conception of refugees. 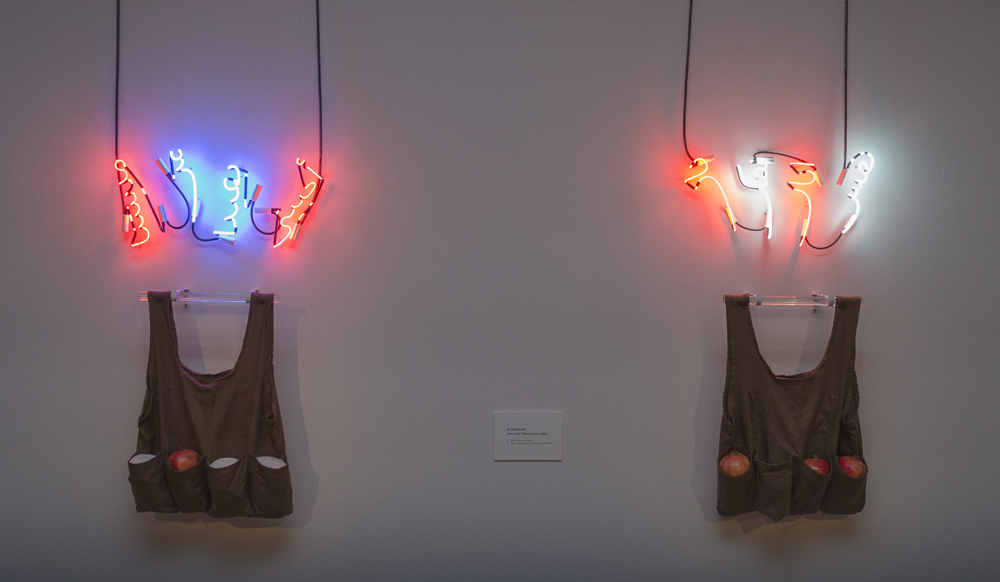 Khadim Ali’s ‘Golden Country’ (2018), a large installation made of steel cut images of Australian native animals, dominates the gallery space. Radiating under a florescent light, each of the steel animals, such as a koala, an emu, or a kangaroo, has been painstakingly interwoven with Persian and Arabic calligraphy. Here Ali is transposing texts of praise onto Australian cultural symbols, highlighting the modes of adaption that underlie his dual identity as refugee and Australian. Kurdish artist Avan Anwar captures her traumatic past in ‘Indurability of Life’ (2018), spreading fresh jonquil flowers on a white wall. Anwar’s work draws on her personal experience of identity crisis, physical disability and displacement. (She lost the fourteen members of her family and her hearing during Saddam Hussain’s chemical attack on Halabja in Iraq when she was five years old). ‘I want to reinvent what is lost and ‘left behind’’, Anwar says, ‘to re-live the past, and as a remedy against forgetting.’ The fragile flowers become an emblem of the hidden trauma she carries within her, but also suggests the processes of rebirth in a new home country—a cycle between tragedy, exile and regeneration.

The second gallery is laden with Afghan tapestries, Afghan rugs, a tea table, tea and candies. In the centre, a geometric installation is filled with spices—turmeric, paprika, cardamom, cinnamon, dried herbs, poppy seeds. ‘The Star Seed’ (2018) has been created by Nazanin Marashian, an Iranian born local artist, in collaboration with members of the community collective ‘Afghan Women on the Move’. The work takes the form of a compass, a potent tool for navigating the world, but one that is also symbolic of refugees plotting a course through Australia’s complex immigration system (all while experiencing a sense of homelessness and dislocation). Filled with the spices found in every Afghan home, the installation repurposes cooking ingredients as markers of resilience and courage. ‘Planting Seeds’ (2018) consists of 300 discs that are as small as coins. Each disc bears the work of its creator: symbols and words written in Farsi, such as ‘life’, ‘wish’, ‘love’ and ‘free’. In asking the members of ‘Afghan Women on the Move’ to inscribe the disks with their hopes and dreams, Nazanin captures the individual narratives and desires of these women through their words and symbols, and then openly displays these for the community. 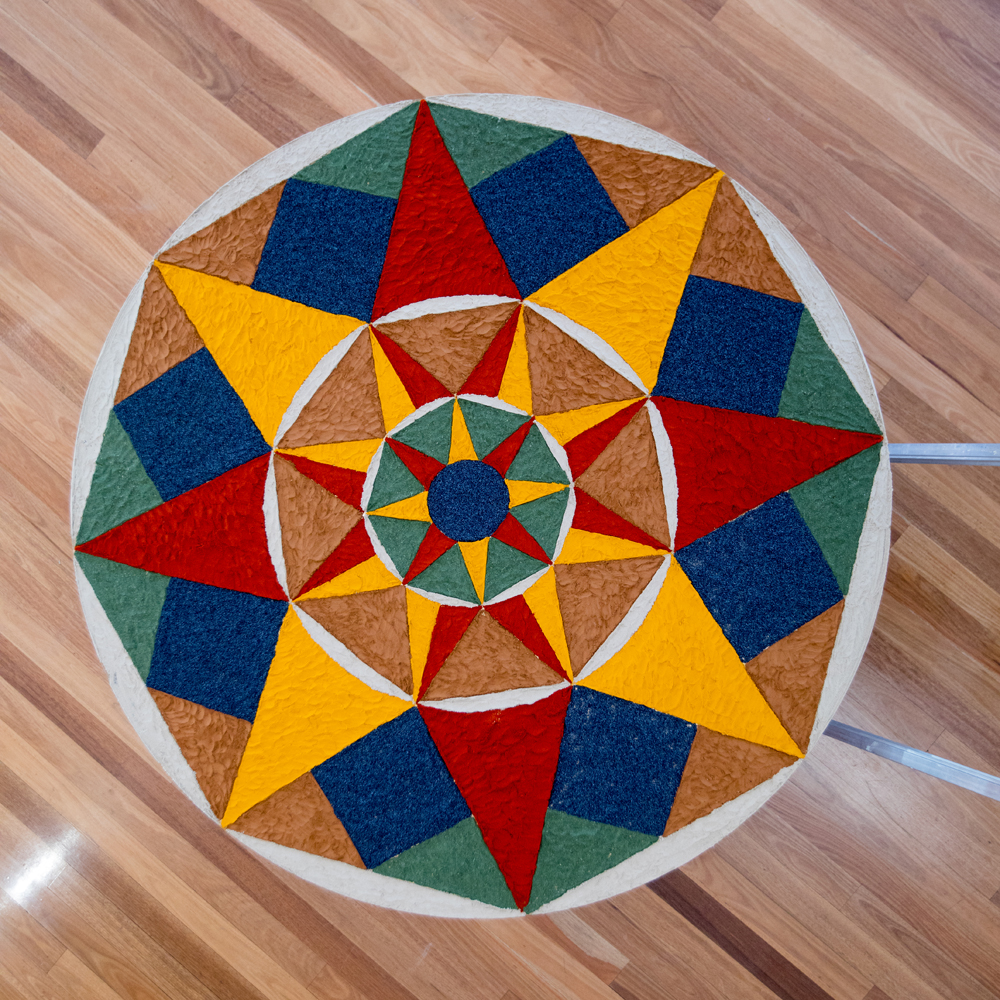 Afghan women are often invisible and voiceless in Australia: though freed from the shackles of tradition, women who arrive as refugees still face surmounting challenges, such as learning a new language, and navigating heavily traditional gender roles. In the last week of Daneha’s exhibition run, Monirah Hashimi, a Sweden-based artist, performed Sitatara (The Star) (2018) in Blacktown Arts studio. The play tells the story of three Afghan women: Gul Begum, who was enslaved during the Amir Abdur Rahman Khan rule at the end of 19th Century, which displaced and killed 62 percent of Hazaras; Sara, who lived during the period of civil war; and Halima, who was stoned to death in 2014.  The play encapsulates the experiences of Afghan women, and the current predicament of those who still struggle for their existence. Such public outrages still abound—in 2015 Farkhunda Malikzada was accused of blasphemy, before being dragged, run over by a car, and killed by an angry mob.

Monira’s work, like any other artist in Daneha, illustrates that refugees are not victims of circumstance, and offers a testimony of resilience and courage. In a period where images of horror fill our TV screens, and a mistrust of asylum seekers fuels debates on talkback radio, Daneha transcends the current political moment. Rather than be defined by trauma, the exhibition demonstrates how refugees find their own narrative and empowerment through art.

The exhibition is unique in many ways, most importantly in being driven and formed in consultation with the artists and the community. On opening night, I saw the gallery bustling with a large contingent of Blacktown’s Afghan community, who streamed through its rooms, perusing the artwork while enjoying the Afghan cuisine: Basmati rice topped up with raisins, lamb curry and fried fish. In the gallery, an Afghan woman, dressed in traditional clothing, served the visitors with tea, candy, and kish-mish from the tea table. The performance studio was packed with people, listening to speeches and watching an Afghan girl perform a traditional dance with traditional Afghan clothes to the rhythm of tabla and rubab, a traditional Afghan music.

Images of refugees too often conjure up images of victimhood, helplessness and trauma. And whilst trauma and suffering are part of the refugee experience and deserve to be told, focusing on these things too much can thwart the language of empowerment. Daneha underscores the courage, resilience and agency of refugees who have transformed their loss into art. Out of loss and trauma something potent emerges that is enriching and beautiful, a contribution to the artistic culture of Blacktown, and Australia more broadly. The exhibition is a poignant example of how displacement can be a site for regeneration, and a catalyst for creativity.