There’s a provocative question asked in one of the many video works in The Public Body .03 that lasts for only a second—‘but what if a species is nothing more than a set of relationships?’

The question appears in Korakrit Arunanondchai’s ‘with history in a room filled with people with funny names 4’ (2017), a video work that connects the themes of tech-futures and spirituality with memory and social change. Fantastical spirit characters perform on screen: an overlarge rat that has survived some future apocalypse; a green-skinned human-bodied snake spirit who exists beyond worldly constraints; a mystical turtle; and, most present of all—the French-speaking drone spirit, Chantri, voiced by Arunanondchai’s grandmother. Arunanondchai’s concern with memory and change is placed alongside these creatures, and is configured around more familiar images of social collectivity: collective resistance (in women’s marches and anti-Trump protests) and collective mourning over the death of the King of Thailand.

These scenes are set against a slow audio exchange between the artist (speaking in Thai) and Chantri (speaking in French). But Arunanondchai’s grandmother is also present as her physical self. Separate from her voiceover role, she sits and repetitively touches mounds of colourful children’s blocks, or she takes off a bedraggled slipper and moves it to and fro, hiding it, then finding it again. Such measured, almost considered movements will be familiar to all who have experienced a loved one’s dementia or Alzheimer’s induced shift: Arunanondchai’s grandmother is both embodied in her presence and disembodied in her absence, at the same time. Indeed, all of the bodies in ‘with history in a room’, whether they are tech/spirit, social, family or grandmother, are rearranged. For Arunanondchai, it is constant materialisation, not stasis or even process, that characterises the body, however defined.

The Public Body .03 is the final instalment in Artspace’s exhibition trilogy probing the relationship between people, representation, and society. Taking the digital as its starting point, this third iteration offers a speculative interrogation of the boundaries of the human. Rather than acting as a conclusion, The Public Body .03 reflects back on the concerns of previous iterations (what can a body be?), and also projects forward to another question: what defines the human and how does this reflect the social. The exhibition balances the aesthetics and promises of early digital art—the internet and screen culture’s ability to transform our bodies—with more recent accounts of the body as always contingent and configured. This is a body rarely as self-evident, or as contained, as conventional wisdom would have it. 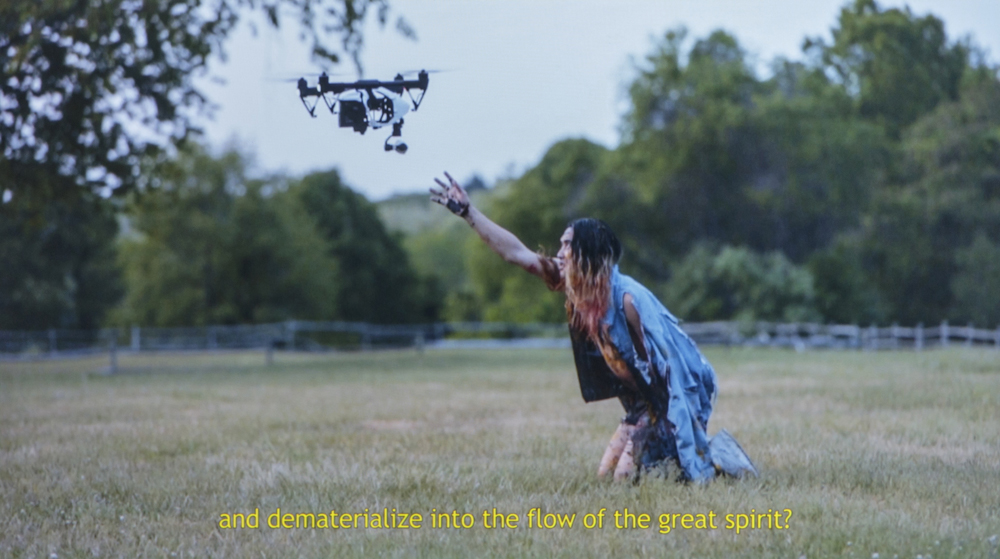 Korakrit Arunanondchai, with history in a room filled with people with funny names 4 (2017)
video (still), 23 mins 31 secs, courtesy the artist and CARLOS/ISHIKAWA, London

The Public Body .03 casts the concerns of digital art and its relationship to the boundaries of the human in a way that is distinctly fleshy. Indeed, flesh envelops the exhibition: Patricia Piccinini’s sculptures are recognisably puffy and pink, animations are filled with all kinds of grotesquerie, and the walls painted in differing peachy tones. It’s the walls themselves that give the exhibition its heat, with the gallery space morphing into an all-encompassing body. In this sense, the fleshy walls sometimes induce mild claustrophobia, and give materiality to the feeling that the art world is a particular kind of body: the ‘neutral’ white cube given form as the white body it always was.

But these walls also act as folds and layers and openings that allow for other bodily (re)arrangements. Only when leaving the space do I notice a small, unassuming painting hanging underneath the vinyl wall lettering of the exhibition’s title. Celia Hempton’s painting ‘Colby’ (2015) zooms in on the splayed ass of gay porn star Colby Keller, the creamy white of his legs open to the soft pink of shorn balls, which leads up to his more blush-pink butthole. Whilst the walls provide a natural habitat for Piccinini’s striking creatures—even more so for her series of hanging mushroomy growths titled ‘The Grotto’ (2018)—the play on skin and flesh is almost dissolved in ‘Colby’. Hempton’s stark contrasts may be thrown into relief, but subtle tones fade.

In this instance, the wall as metaphorical skin acts as a platform for the question of what gets to count, which then prompts the trickier but much-needed question—how is this part of other systems of knowledge?

Nowhere is this more striking than in Doreen Garner’s equally small sculpture at the opposite end of the exhibition titled ‘Breast Plate’ (2017). In constructing this sculpture, Garner has drawn from her research into a nineteenth century American gynaecologist who experimented, without anaesthetic, on the bodies of enslaved black women. The work itself sees a silicone black breast ripped from its body, which floats gruesomely in its case like the medical specimen it is reduced to. Dozens upon dozens of steel pins pierce the breast in a grisly echo of the scene of medical testing.

In the context of this iteration of The Public Body, the presence of ‘Breast Plate’ reinscribes not only the raced and gendered histories that permeate our spaces and contexts, but also their continued role in materialising our bodies. We cannot abstract our bodies from such histories, rather, who we are in this moment becomes an alchemical mix of memory, flesh, skin, perception, and context. Constant materialisation in the shade of this history does not open up utopian spaces of digital abstraction—it may ask the same questions, but it does so by more forcefully redirecting these at the taken-for-granted starting points of ‘neutrality’.