What makes a chair a chair? Legs, a base, a back? How abstract can a chair become before it’s completely unrecognisable – before it turns into a creature or a sculpture or a hatstand?

I remember walking through a room – I’m pretty sure it was at the National Gallery of Victoria, or maybe the National Gallery of Australia – where a whole history of chairs had been set up, maze-like, in a large space. These objects pushed the parameters of the chair: four legs, three legs, no legs; enormous and tiny, like those computers that can fill a whole room versus the ones that fit easily into your palm. There were diagonal planes of wood carving out space, there were perforations and strange materials, some of them echoed human bodies and others were utterly alien.

For her new show Bad Ems at The Commercial, Emily Hunt has made nineteen stoneware chairs. They are small (you could hold them, only just, in your hand) and displayed on white shelves. Some of the shelves are above (my) eye height, which introduces an odd paradox. The scale of the chairs should make me feel comparatively enormous, but the shelves make me feel like a kid trying to look over a counter. It’s a bit annoying, not being able to see the high-up chairs properly, but I figure it must be deliberate: when you’re shorter than something – or someone – you’re forced into a position of supplication. But you can also see those above you from their least-flattering perspective. You are privy to their double chins. You can see up their skirts. One of Hunt’s chairs has a kind of skirt – a clay frill around its legs. The glaze is patchy and unfinished on some of the undersides. 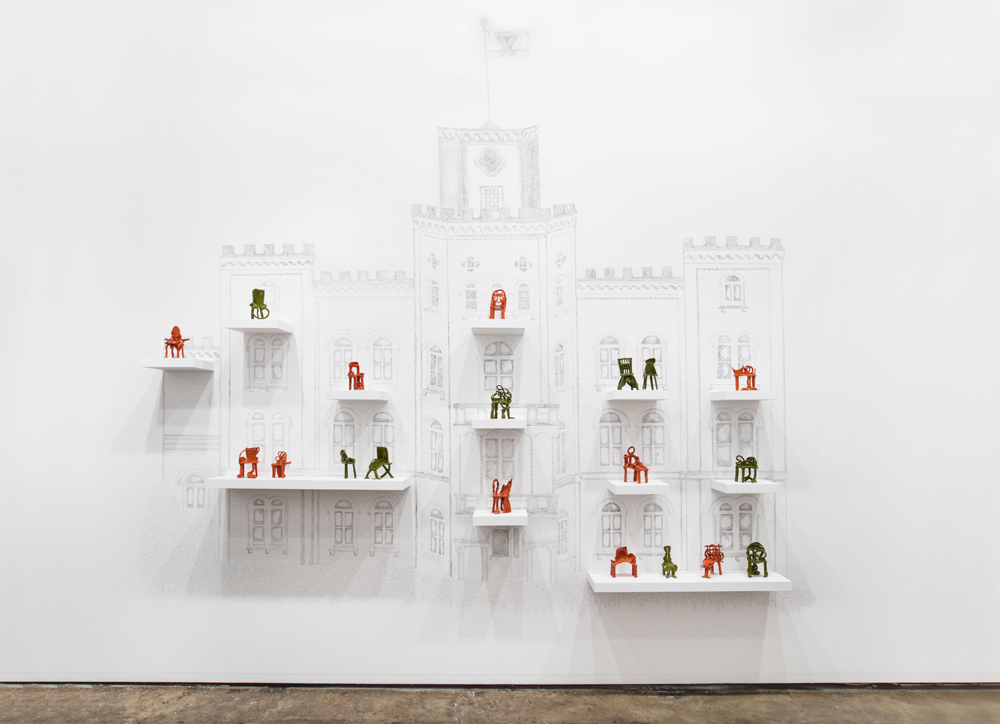 The chairs themselves are gorgeous, but not in a straightforward way. They are grotesque and baroque: ribbons of clay writhe and coil to create elaborate armrests. The high-gloss glaze, in forest green or red-orange, pools in crystalline cracks where the clay has been affixed to itself with neat dents. Some legs are thin and angular; others are rounded and lumpy, almost curling into the shape of turds. One kind of stumpy chaise longue is endowed with six log-like legs.

Some chairs are borderline kinky, as if the coils and whorls might strap you in. I think of thrones, and the electric chair. If chairs are symbols of power, Hunt’s are extravagant and impractical: a parade of misfits staking a very serious claim to the irrational.

Facing the chairs are three monoprints on silk. Each one has a hidden backing, a neon-bright silk that feels like a reward for my nosy close-looking. These backings reflect onto the wall, pink and shocking, but kind of secret. The monoprints themselves are small images in the centre of large banners, and the imagery is classical-looking: ancient portraits carved into ink. The silk is delicate and heavy, and when suspended from brass rods, the banners round out into their lower seams. These rods rest between hand-made ceramic brackets, and it’s these elaborate fixtures that distinguish the prints as objects rather than images. They jut out from the wall, providing distance so that the fabric billows, taking up space. Hunt has worked with both ceramics and printmaking for years – initially trained in the latter – and tends to find unexpected ways to combine the two. In the banner works, clay plays a supporting role.

A grand château is drawn directly, in lead pencil, onto the wall behind the chairs. The drawing is called ‘Slosh Balmoral’ (2017) and I imagine this is how Hunt’s daughter might refer to the institution where Hunt has been in residence this year. Künstlerhaus Schloss Balmoral, in a German spa town called Bad Ems. Ha. The château façade has a lot of windows, and the perspective is all off: at its highest point, it’s drawn as if you’re looking down onto the roof. It is an architectural folly, fit to house unreasonable chairs.