For the group exhibition, INSIDE, curators Stella Rosa McDonald and Rafaela Pandolfini have brought together a collection of new and old works that signify unstable, recalcitrant and predominantly female bodies. Some of the nineteen artists included fit this interpretive framework plainly, while others stretch into more complex conceptual terrain – the body, if it is there at all, exists as earth, as space, as metaphor, as form. Mimi Smith’s refined prints of her pre and post baby bras captioned ‘Thirty’ and ‘Thirty-five’ (2015) sit beside Hannah Brontë’s ‘Umma is Burning’ (2017), a work that speaks to pressing questions of ecology, colonial wreckage and Indigenous sovereignty. The looseness of this curatorial approach results in an urgent, post-crash style. Put together independently and hung in the main space of the Paddington Town Hall, with scaffolding standing in for gallery walls, INSIDE exemplifies a current aesthetic of emergency.

The present moment is charged with a very palpable sense of time running out. Whether or not it is borne out, we are now working with the idea that in 80 years, the earth will be too hot for human occupation. With this contracted sense of history, art – and the exhibition of it – becomes something for the present rather than for the archive, and with this comes a particular undoing, expressed here in the layout of the show. 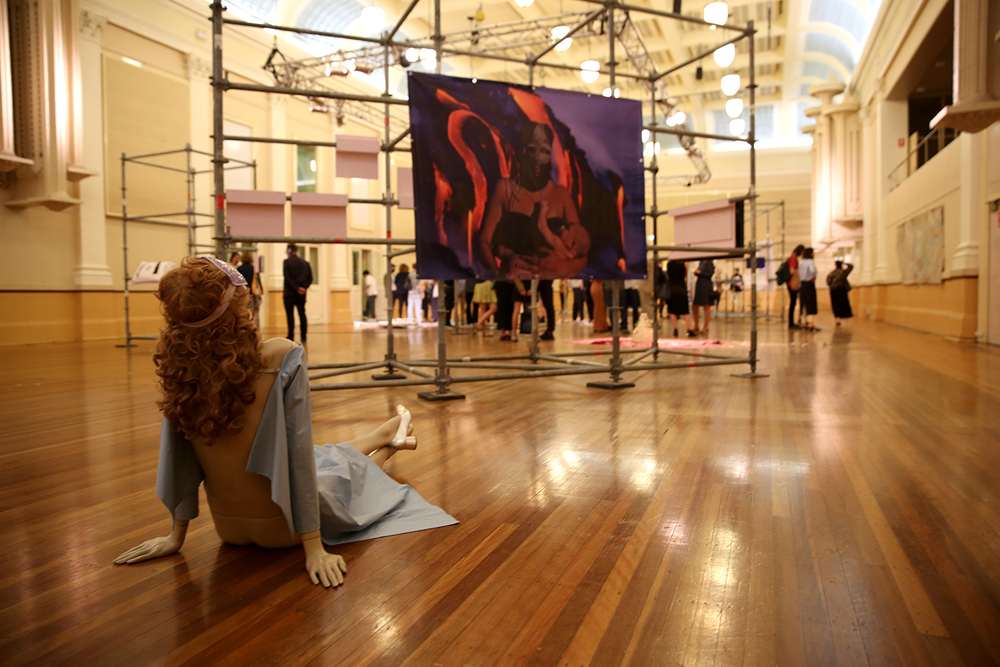 The heavy scaffolding gives the room the look of a disaster relief effort. The works that are not supported by it are spread across the floor, which is strewn with distressed peonies, the fallout of an opening night performance. Gian Manik’s ‘Tom and Rebecca’s Wedding Cake’ (2017) is laid out on a mat, Ainslie Templeton’s piss soaked canvases, ‘heterographic blanket (domination)’ (2017), are spread out as if to dry. Hannah Brontë’s prints are displayed on large vinyl sheets that are edged with holes so they can be tied onto the scaffolding like tarpaulins, and the video works play on screens that look as if they’ve been rescued from scrap. Towards the back of the room, Hannah Quinlan and Rosie Hastings ‘UK Gay Bar Directory’ (2016) is presented on plastic monitors in a library study carrel, and around the edges, out-of-use mannequins clothed in the conceptual outfits of Dolci and Kabana are all pale khakis, beige and institutional blues.

The mood of post-disaster existence is also present in some of the individual works. Jana Hawkins-Andersen’s ‘Sympathy and Contagion’ (2017) melts across the floor, a translucent sludge shimmering with the synthetic glitter of false nails, condom wrappers and pink string.

In ‘UK Gay Bar Directory’ deserted dance floors are flush with disco lights and pumping anthems. And hidden against the back side of one of the scaffolds is a text by Ariana Reines, ‘A Home in the Culture’ (2017), which details her ambivalent feelings toward her homeless mother, and an audio visual work, ‘Sandra Reines, 9/14/17’ (2017) that features wandering vocal recordings that possess the ritualistic intensity of an incantation. Together, the three works communicate a current of deep sadness and loss.

In her 2010 essay on curation and education, Nora Sternfeld suggests that an exhibition’s intent might be as a space of non-unity, “a place where forms of taste, opinions, and worldviews that transgress an individual’s habitual boundaries can encounter one another.” [1]
The works in INSIDE encounter one another in this ‘disagreeable’ way, the highly skilled alongside the poorly rendered, but they coalesce into an overall aesthetic of urgency and disaster. It is a show for the moment.