A fortnight of equatorial downpours preceded the opening of Michael Armitage’s solo exhibition, The Promised Land, at the Museum of Contemporary Art in Sydney. With a heavy blanket of humidity cast across the city, this oppressive atmosphere seemed to sit comfortably alongside the bright colours and rotting surfaces of his paintings. Slick and warm, the forms of Armitage’s compositions seep together in a febrile haze. The dream-like scenes in this modest suite of ten paintings are unsettling, with their real-world stimuli only hinted at through a handful of typed lines on the supplied room sheet.

Michael Armitage is a young painter of Kenyan and British descent, currently living and working in London. After a childhood in Nairobi, Armitage studied painting in London and for the last seven years has been creating large-scale narrative figurative paintings to international acclaim. Natasha Bullock, curator of The Promised Land, has given Australian audiences a rare opportunity to experience his paintings in one of the most frequented galleries of the MCA. This small display is sandwiched between major international exhibitions of the artist’s work: the 2019 Venice Biennale and a solo exhibition curated by Thelma Golden at New York’s MoMA, opening in October.

While Armitage’s paintings are stylistically related to the work of Scottish contemporary painter Peter Doig, they also pay clear homage to Francisco Goya’s romantic dreams and to the troubled colonial vision of Paul Gauguin. But Armitage also channels the brazenness of East African artists Jak Katarikawe and Edward Tingatinga. Childhood memories, empirical observation of current events, and absurd visual fantasy overlap in Armitage’s paintings, as they often do in our minds. His dreamlike scenes of anthropomorphic animals and fable-like unresolved narratives address real-life contemporary concerns in East Africa, including abuses of power, superstition, and post-colonial social injustice. 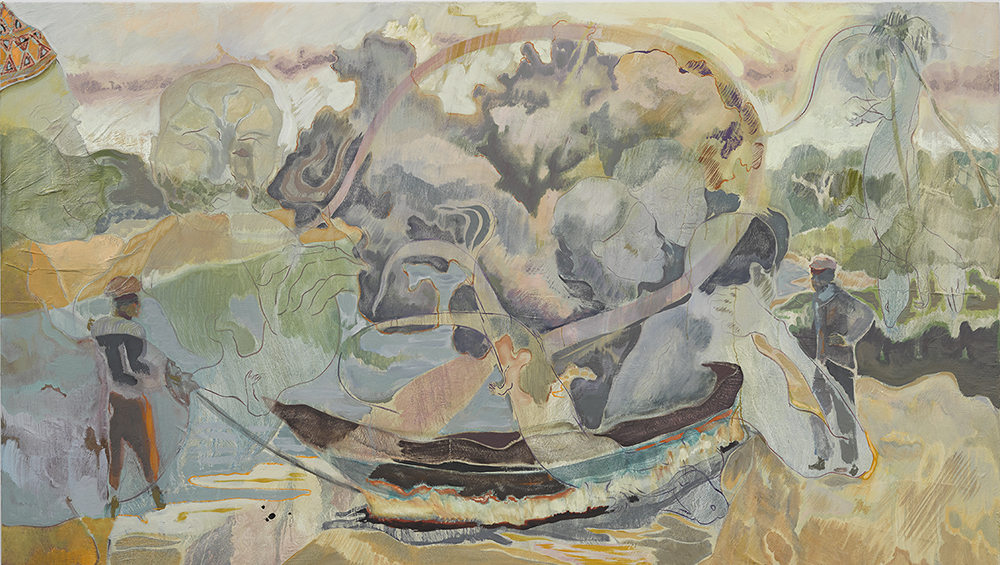 These paintings hold a delicate balance between convention and exoticism. In presenting these sumptuous images—each laced with unexplained mysticism, the threat of violence, and, at times, sexually explicit subject matter—Armitage places the viewer in an uncomfortably voyeuristic position. We become caught between curious fascination, sensuous aesthetic pleasure, and an awareness of the profound superficiality of this engagement. The characters of Armitage’s scenes offer no assistance to the viewer—with their backs turned, faces obscured, or proffering a defiant gaze, they evade explanation and support Armitage’s refusal to guide us through his paintings.

Armitage’s artworks are painted on a rectangular support of tenderised and stretched Lugubo bark, a material of cultural importance for the Buganda tribe of Uganda, with its methods of creation protected by UNESCO World Heritage. Having been stretched like canvas, you could almost forget their substance, if it weren’t for the vine-like stitching, lacunae and occasional protuberances that punctuate and interrupt many of the images.

Appearing at first to be firmly based in the Western canon of history painting, Armitage’s works in fact contain images and compositions that are culturally ambiguous, drawing from both European and Kenyan artistic precedents. In using a material support that has been severed from its original sacred function, and executing his paintings primarily in London, Armitage is removed geographically and temporally from his sources. For Armitage, this material has already ‘lost all of its purpose and significance’ through tourism, consequently becoming an appropriate vehicle to address the threat of cultural homogenisation. Through his paintings, the artist flirts with the idea of distance and remove, adopting for himself an outside exoticising gaze on his home country and its people. Armitage clarifies: ‘I wanted to pull away enough from this idea of the exotic, so that I could use it as I wanted, instead of it being the overriding narrative to the work.’

For Armitage, the act of pulling away involves several methods of distancing, as well as the embrace of a cultural hybridity that inspires discussion and debate, particularly around cross-cultural exchange. In ‘Antigone’ (2018), the proverbial fig leaf is held aloft, scarcely concealing the female protagonist’s unabashed nudity. While she adopts a pose appropriated from a painting by Katarikawe, when viewed through the prism of the painting’s given title (taken from Sophocles’ Greek tragedy), this figure evokes the universality of questions of familial duty and the policing of female desire. 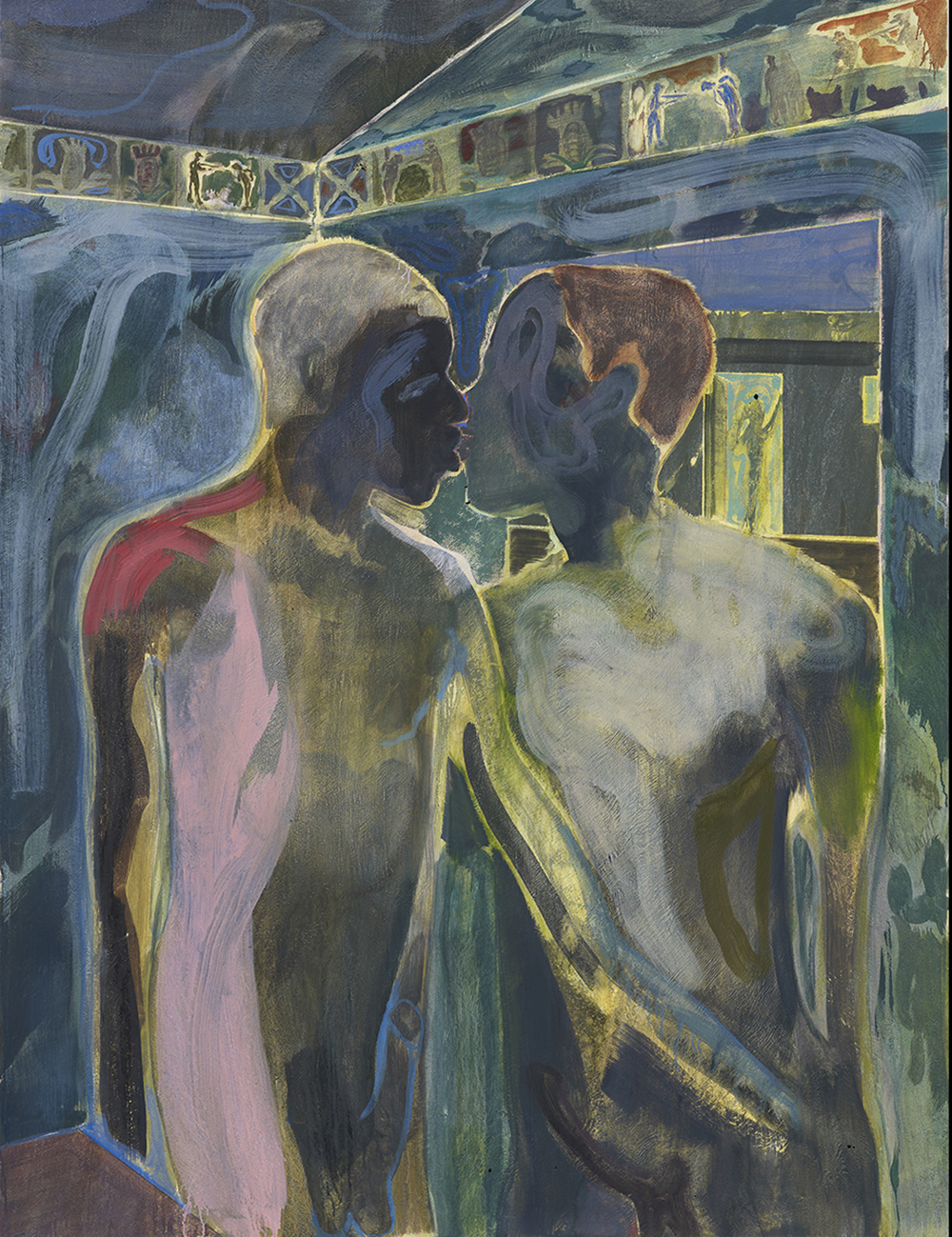 ‘Wherever I was, I was always an outsider, more of an observer,’ Armitage explains, ‘I am fortunate to have two worlds to draw upon and to reflect upon. I also wonder who does feel a part of things? There is always some form of distance. Even in a family.’ While on the continent, Armitage immerses himself in social events, observing them and capturing mental images to draw upon back in his studio in London. It’s interesting to note Armitage has never, to date, had a solo exhibition in Africa, much to his frustration. Hence, until now, the audiences for his paintings have almost exclusively been Western, and largely unfamiliar with East African culture. In spite of this, Armitage’s paintings do not adopt a role of cultural mediation. Consider ‘The Fourth Estate’ (2017), where Armitage’s own curiosity in observing a local political demonstration in Nairobi’s Uruhu Park sees supporters perched in a large tree, brandishing banners emblazoned with the face of their leader. This absurd political farce is reminiscent of Belgian painter James Ensor’s early surrealist carnival scenes from the turn of the century, and strangely unifies contemporary viewers in their experience of the current spectacle of global politics.

As Armitage’s painting has matured, the range of texture in the surfaces has increased along with a more complex layering of imagery. Saturated colours of indigo, turquoise and sunflower yellow prevail, hues almost completely foreign to London’s grisaille.

It is as if Armitage has had to fight to lay down each layer of paint, the surface resisting impregnation, and it is this inherent difficulty that gradually dictates the appearance of the tableaux. Multiple frames are superimposed on top of one another, allowing for a series of narratives or vignettes to be depicted simultaneously.

The fatal judicial consequences of the two embracing men in ‘Kampala Suburb’ (2014) is hidden within the painted frieze of hieroglyphs which runs above their heads. ‘The Promised Land’ (2019), on the other hand, is divided into two scenes by the central placement of a baboon sitting on an open newspaper. On one half, the protestors enter the city gate with jaws clenched and expectant fanfare, while the other side depicts an amorphous and violent cloud of tear gas and thrown projectiles. While some paintings, such as ‘Lacuna’ (2017) are built up with accretions of thin washes and sketched outlines, others are gestural, with psychedelic swirling surfaces, such as ‘Mangroves Dip’ (2015).

These restless images have been described as ‘beguiling’ and ‘enchanting’, terms that sit a little too close, at least semantically, to notions of the occult, of an experience outside empirical reasoning and to a fetishism of cultural otherness. While Peter Doig relies on a certain cultural dissonance in representing Trinidad in his artworks, Armitage’s works build upon his childhood in Kenya and the access it gave to the intricacies of its culture, albeit painted from the vantage point of a London studio. His handling of what would have once been considered exotic subject matter is done with conviction and sensitivity, achieved through an acceptance of his own, and our own, cosmopolitan perception. While the paintings are visually stimulating, chronicling contemporary times in captivating scenes, they offer no clear comment or moralising discourse. That, the artist leaves to the viewer.

Author’s note: all direct quotes are derived from Michael Armitage’s keynote lecture at the MCA on Saturday 29th of June, 2019.