Two-hundred-odd elongated beeswax candlesticks hang by their uncut wicks over three wooden dowels. Their smooth, organic contours are appealing, prompting my comrade to pull down her mask in the otherwise empty gallery to inhale their cosy, honeyed scent. The primary function of a candle is to emit light upon ignition, yet these candles are, for now, unable to be lit. The process of creation usurps the end goal.

‘Time Spent’ (2020) is one of six elegant works constituting Fumé: Sarah Rodigari’s solo exhibition at ANKLES, curated by Mitch Cairns. Fumé develops the key concerns of the artist’s transdisciplinary practice, inviting its audience to consider the value of time and labour. Through utilising broad technical expertise, Rodigari’s art-objects seem to ensnare a transitoriness characteristic of performance works. In this ruminative exhibition, Rodigari permits us to bear witness to this precious tableau—the residue of performance.

ANKLES inhabits the first-floor landing of a building haunted by the spectres of its previous incarnations over the twentieth-century: formerly, it housed both a commercial printery and a sheet-metal works.

The gallery exists in what was once a modest reception area, a space with which Rodigari’s work converses fluently. By way of seamless curation, it seems plausible that, from behind one of these works, the building’s past concierge might suddenly materialise.

Set into an existing window frame is ‘Strange Loop’ (2020), a sheet of bronze-tinted glass so expertly crafted and installed that, at first, it is barely perceivable as being separate from the foyer’s original glazing. In responding to the site’s architecture and history, Rodigari seems to almost resurrect the gallery space’s former working lives. 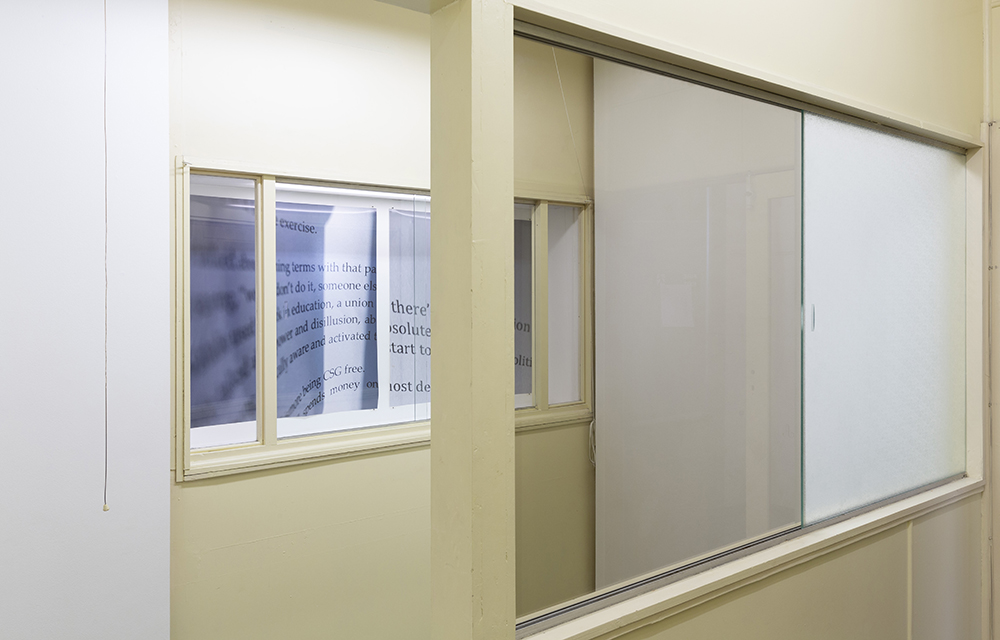 One characteristic of alienated labour is that the product has been disconnected from its worker, thus existing independently of it. Of this, the young Marx writes: ‘The product is after all but the summary of the activity, of production.’ However, despite the worker’s physical absence, the pieces in Fumé are far from alienated, instead retaining a spiritual connection between creator and creation. Rodigari’s pieces seem to exist in a state of pause, not quite ‘finished’, and yet so complete in their incompleteness. These works are not merely the summary of production, rather, they capture one point of process. The amplified role of process in an art-making practice such as Rodigari’s is unsurprising when considering the etymology of the word ‘culture’—stemming from the Latin colere: to tend, till or nurture. Through this, we are reminded that culture is itself a practice—a process of making, rather than what is ultimately made.

Fumé foregrounds the presence of process in ‘Between Acts’ (2020), a series of four large digital prints that capture fragments of dialogue. Printed pages photographed in extreme close-up are buckled as if they are midway through being turned, which distorts the ink-jet rendered text. The title suggests the practice of performance, yet the work itself is not a transcript of an enactment before an audience. Rather, the work acknowledges the pauses, the hesitations, the arduousness intrinsic to the labour of performance. The text is set in fonts recognisable as the amateur typography of the desktop publisher. In these un-retouched photographic images, emphasis is placed on the grain of the copy paper on which the text is printed. Utilised by the writer whose work is still in process, this common paper stock lacks the formality of the kind of printed page that would once have been reproduced on a commercial scale at the gallery site. Rodigari’s act of photographic elevation in this work imparts a gestural grandeur to humble lettering.

The images constituting ‘Between Acts’ are placed in permanent inset vitrines with sliding glass doors reminiscent of a mid-century bathroom cabinet—remnants of the building’s vernacular commercial architecture. While the contexts of the conversations transcribed in the photographs are unknown, it is possible to glean from the orphaned words—education, disillusion, contradiction, poet, unravel, aware—that Rodigari’s dramatis personae might have been discussing process and labour, work, worth, and what is worthy. One sentence alone is rendered complete, part inquiry, part accusation: What are you then? In this gallery setting, the question demands an answer. 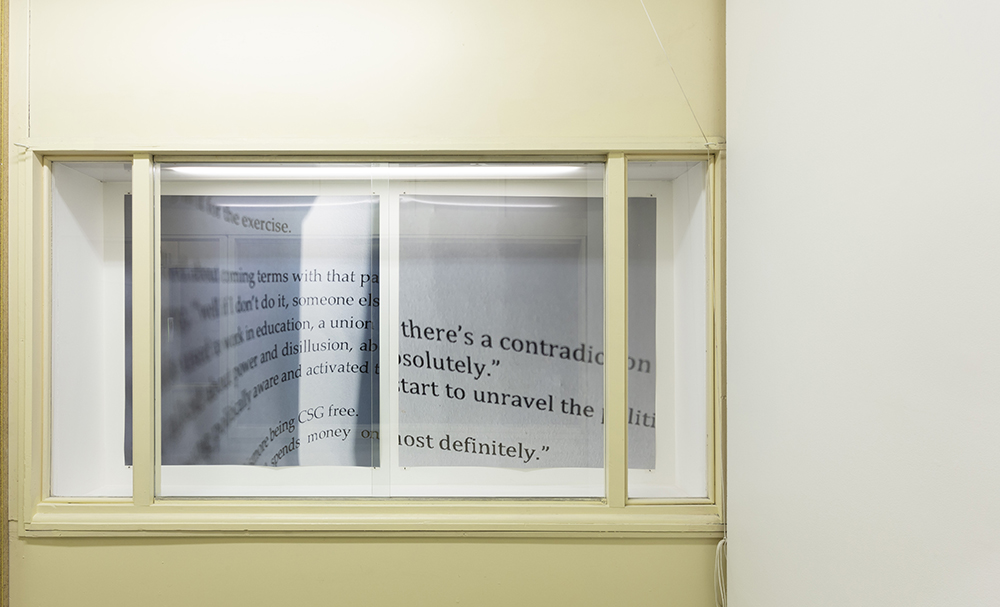 Rodigari and Cairns’ placement of ‘Between Acts’ in the vitrine renders it part of a visual rhetoric that relies upon histories of display and classification. The way in which artefacts are ordered via the politics of curatorial taxonomies in the museum setting can be considered arbitrary at best and, at worst, violent. As Foucault writes of Jorge Luis Borges’ The Heavenly Emporium of Benevolent Knowledge, when exposed to ‘the charm of another system of thought’ made obvious is ‘the limitation of our own, the stark impossibility of thinking that.’1 ‘Between Acts’ elicits thought into these narrow classifications: how do we arrive at ‘that’, the hierarchy of value in art practice and art-objects? In this work, the act of dramatic speech has been turned into artefact and tamed by museological curation.

Colony and cultivation too, find their roots in colere. We could think of the colonial classifications of what constitutes culture, and who is considered cultured—or equally of the colony of bees who cultivate, and whose wax has been cultivated in turn by Rodigari as part of ‘Time Spent’.

The work’s title references the intensive process of its creation, and that labour involves time. Has it been spent wisely? Is the outcome profitable? Was the activity worth it? What are you then?

Cairns explains that ‘Time Spent’ is situated at the intersection of art and craft. ‘That’ system of thought loads these terms with unfairly restrictive connotations. Art may be seen as inspired, as the esteemed work of artists. Art is beautiful; art is a commodity. Craft, then, might refer to the toil of the skilled artisan, or equally to the opus of the untrained dilettante: a work is often condescendingly labelled ‘craft’ in order to differentiate it from its high-culture counterpart. What distinguishes art from craft is merely process. In this enigmatic work, Rodigari places emphasis on process while utilising the broadness of her artisanal expertise.

A hand-written sign pasted outside the gallery space, presumably a legacy of last summer’s bushfires, reminds visitors that the stairwell windows should remain closed while country burns. Yet, within ANKLES, there is smoke. By reminding us of the presence of process, Rodigari’s Fumé conjures a sense of ephemerality that references past practices without nostalgia. Disquiet hums softly beneath the still pause of a thoughtful exhibition. The stasis of museology elevates the dynamism of making. Ultimately, we are witness to the art, and the labour, of capturing transience. 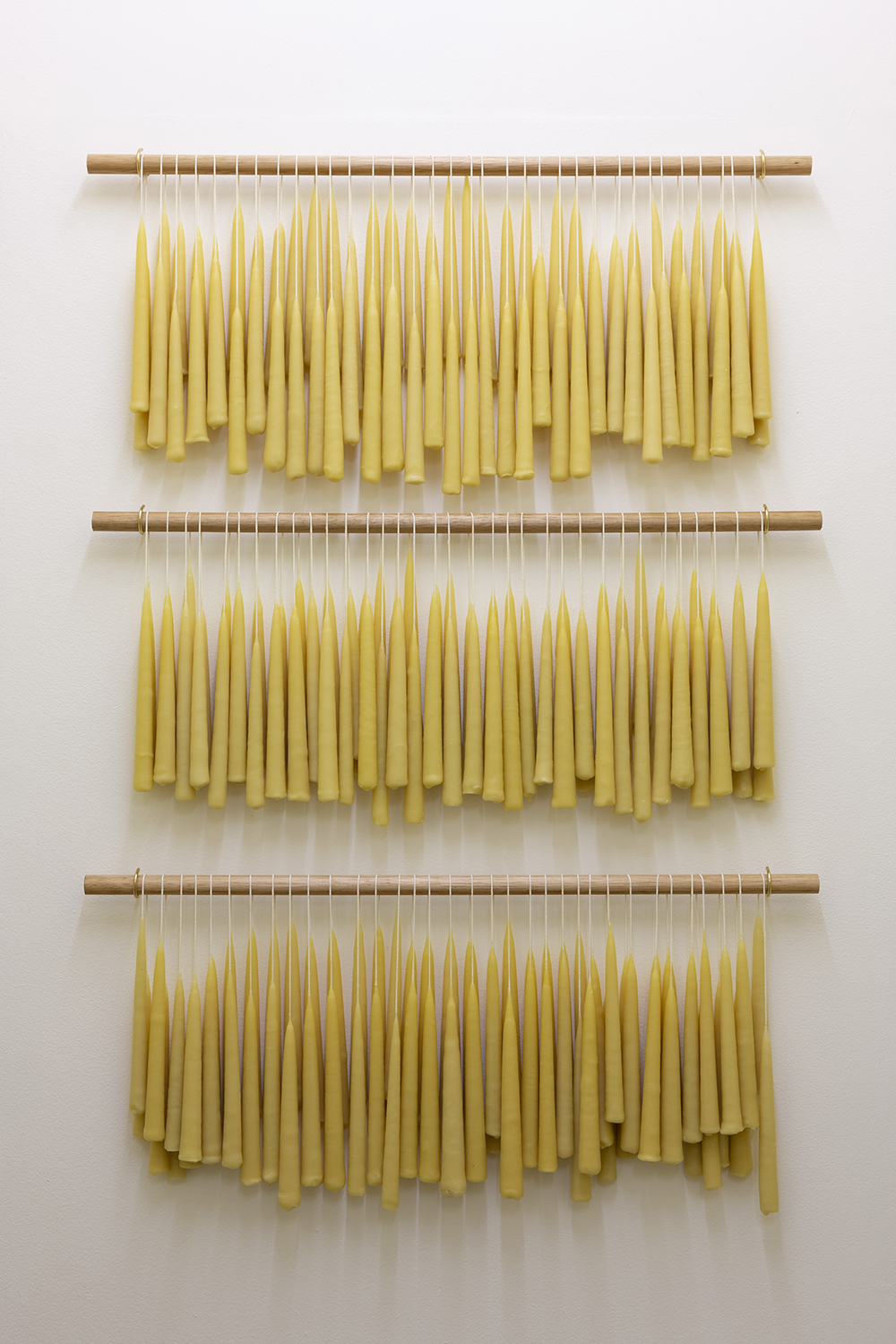