At the beginning of Urban Theatre Projects’ multi-part series Dream Sequence, Brian Fuata intones, knowingly: ‘welcome again to the digital realm.’ Following Fuata, I want to think about the ways that Dream Sequence holds the dreamlike and the digital together as a cognate pair, collapsing the distinction between the ordinary, intelligible surfaces of our waking lives, and their strange psychic and political undercurrents. For me, watching each new episode on the streaky screen of my laptop, the sequence pries open a box of destabilising questions. What does it mean for the undertow of the weird to also move to the surface of the screen, of the objects in our domestic spaces, of our skin, of our tongues as they speak? What kinds of new languages might we come to speak, and be spoken by, in these conditions?

Much of the trouble that’s brought to light across Dream Sequence is distinctly contemporary. There’s the tangible and intangible puppeteering of capital over our daily lives, our haunting by the spectres of cloudy futures as well as our nation’s past, and, most of all, the dissolution of our agency as speakers in the context of technologised language production. This last effect has been especially present in our lives under lockdown, where our interactions with other people have mostly been mediated by technology. In these ways, the sequence is of and for our time, helping us to think about what we might have lost and what we might still be losing as we travel along these various paths of ‘progress.’

Fuata’s ‘Living Room Material (Opaque Contents)’ (2020) is the first work in UTP’s series of videos. At intervals throughout the performance, Fuata glitches his own speech; he repeats little ironies, like ‘technology often fucks up.’ While Fuata performs many of these glitches intentionally, at other times they’re the result of technology actually messing up. In some moments, Fuata’s ghostly grey-painted face spills out into a cloud of obsequiously bright-coloured pixels; in others, his voice lags, and, in others still, he becomes a kind of GIF of himself, stuck in a syllable-length loop for a few seconds at a time. 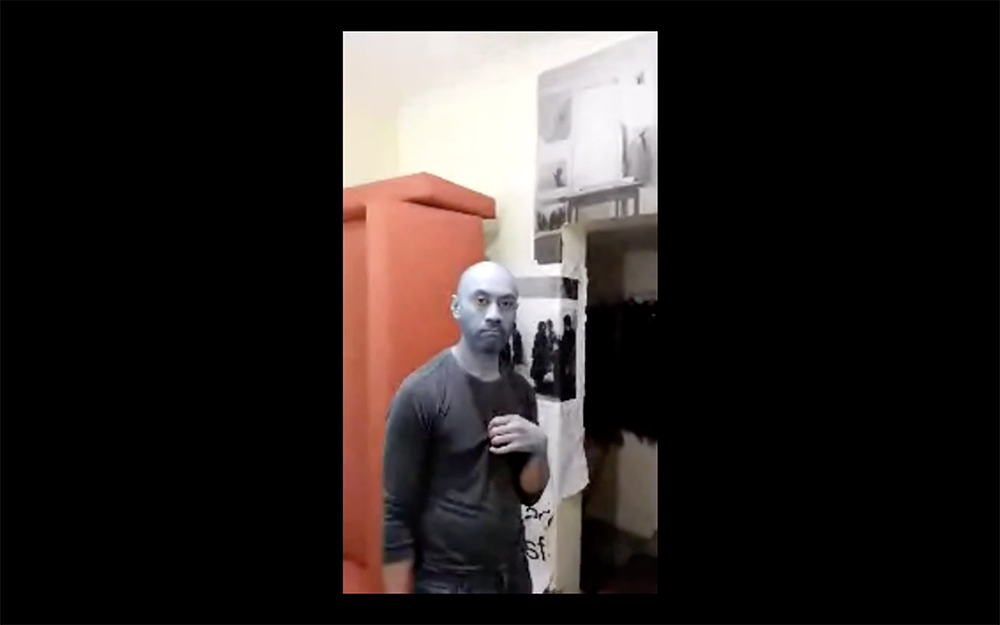 In an explanatory statement about the work, Fuata gestures to Lydia Davis’ ‘In a House Besieged’ as his ideational source material. In this (very) short story, Davis pictures a man and a woman cowering inside their kitchen, hearing ‘small explosions’ outside. ‘The woman wanted to go home,’ Davis writes, ‘but she was already home, there in the middle of the country in a house besieged.’1 Certainly this sense of being besieged, of having the chaos of the ‘outside’ world woven into the texture of our lives in our homes, is what this year has felt like for so many of us. It’s also what life attached to the internet feels like, I think, and a useful way of explaining the reason why Fuata’s glitched speech feels so eerie.

I’m thinking of Mark Fisher’s sense of eeriness here: eeriness as the discomforting feeling that something inside of us, integral to us, might really have its source in the outside world.2 We aren’t (just, or primarily) ourselves, but something more humbled, more beholden to a world we can’t fully control. Language that rushes up our throats and out of our mouths, or out of our fingers, is received, in Fuata’s and Fisher’s eerie visions alike, from elsewhere. As Fisher has it, ‘the eerie is fundamentally tied up with questions of agency. What kind of agent is acting here? Is there an agent at all?’3

It’s not simply that the delivery of our speech can be glitched by technology, it’s that our very words are delivered to us from structures outside of us. So, who, or what, is speaking?

Fuata sees a row of letter ‘s’s stuck up on his wall. As he reads it, he convulses through the pronunciation of the line like a printer stuck in a jam. What’s the source of this sibilant stream? Possibly, the source itself is plural. Sure, it could be conditions of life on the internet, but the ruptures caused by our colonial history also swell beneath Fuata’s speech performance.

In James Nguyen’s dream-work, ‘Ikebana on a Lazy Susan’ (2020), the sounds, movements, and textures of domestic and natural spaces work in excess of language. The technology of the video itself, with its emphasis on diegetic sound, ascribes meaning-making power to almost all the other components of Nguyen’s world before the artist’s own speech or text. This too is eerie, in its way. Nguyen, and the varied technologies that the episode is concerned with, become co-agential in the production of matter and meaning. We human actors become secondary, in a sense, in the making of sense out of the world.

Narrating the video, Nguyen recites: ‘close-up of a toilet bowl being flushed. Overlaid text reads ‘humanity.’’ There’s the brazen middle-finger-to-the-contemporary reading of this moment, for sure. There’s also, though, a softer one, which I think could be even more troubling: amongst the technologies both digital and otherwise that we dwell amongst in our homes, how do we human things become arranged (like flowers in ikebana), spun around (like dishes on a lazy susan) or flushed away (like waste)? 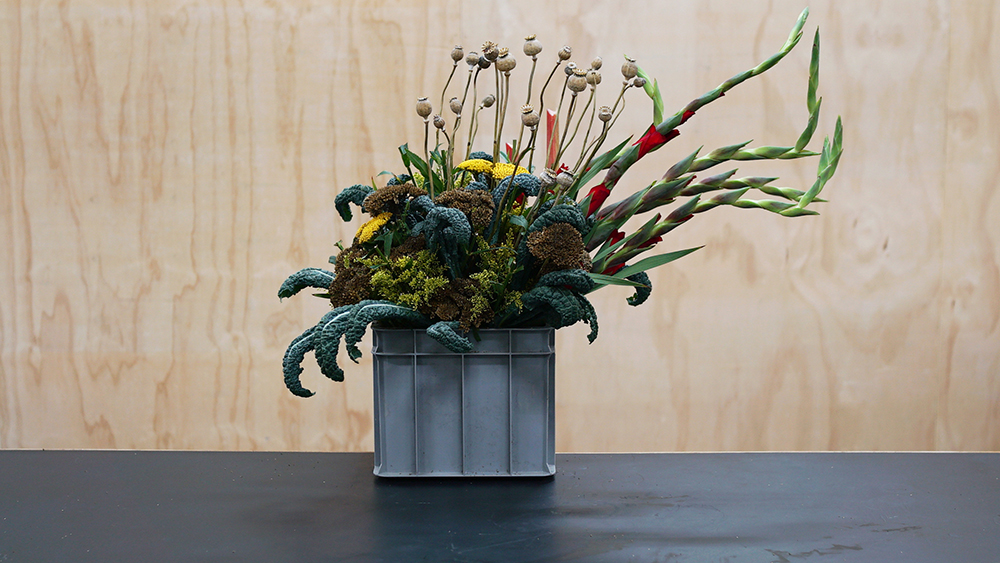 The third episode in Dream Sequence, Evelyn Araluen’s ‘As We Know It’ (2020), pictures the artist, like Lydia Davis’ protagonists, in her house besieged. The eerie dream for Araluen is, pretty explicitly, a nightmare: one in which global transformations of the political, the economic, and the affective disturb the time, the organisation of space, and the speech acts that take place in the home. Buzzes and beeps of iPhone notifications accompany the video, punctuating the quietude of domestic scenes, while the endless email refrain, ‘I hope this finds you well,’ wraps its hand around Araluen’s as she types, and its mouth around hers as she speaks:

I hope, I hope, I hope: it’s a disquieting concatenation, rendering loss of power, of a future, of a way of finding ourselves in the world. It’s this same loss I feel when a robot asks if I’m a robot, as if my waking life really were some weird dream in which I mightn’t be what I think I am. 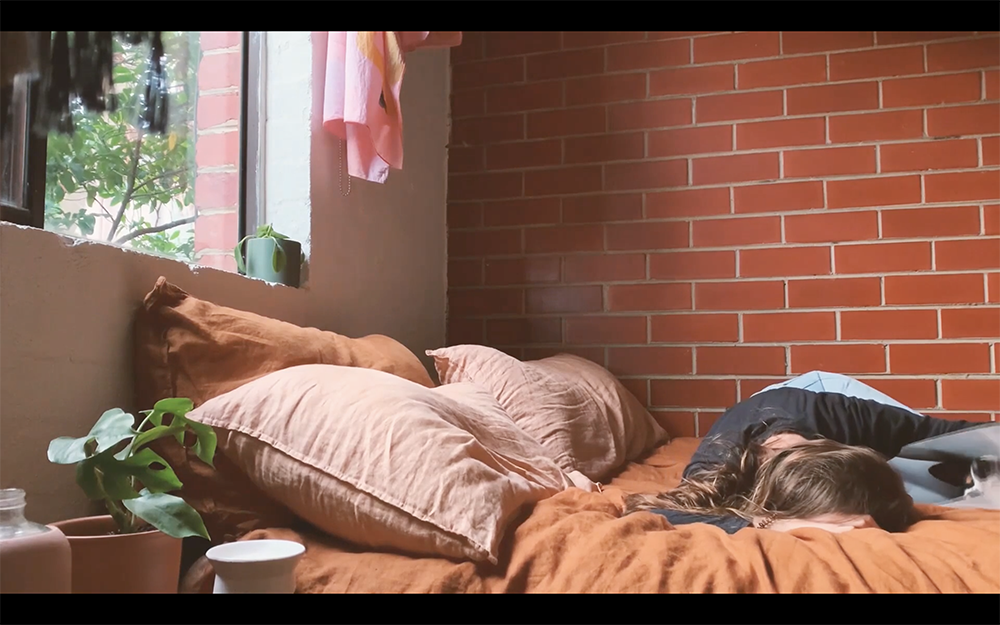 Araluen’s sense that the language we receive from digital technology might all be ‘an elegy for something we lost’ is right, I think, and more obvious to me now than it ever has been before. This loss which is contained within the eeriness of our linguistic lives is one that feels, to me, to re-inscribe itself each day just as we rise from our imagined dreams into our lived ones. ‘Welcome again to the digital realm,’ intones Fuata: today, again, here we are. Perhaps dreaming is a way of registering this loss without needing to have a strategy for dealing with it; it could be a tactic, instead, for floating around inside the elegiac language that we wake up to each morning, continually.