Walking into the last two hours of Daniel Kok and Miho Shimizu’s five-hour performance of xhe, I am overwhelmed by the kaleidoscopic playground of polychrome fabrics, foam block shapes, iridescent blankets, and printed cardboard cutouts. There are chairs arranged around the perimeters, but mostly these are empty. Instead, groups of people are gathered around a towering amorphous sculpture constructed from soft materials and plush toys.

Amidst this maelstrom of colour, I am shocked to find a person sitting on the floor, leaning against a cardboard wall and covered in rainbow fabrics. Their face is wrapped up in a huge blanket composed of bulbous pompoms, and their legs are peeking out the end. How long has this performer been there?

After some time, I realise that this person is not a performer at all, but is, in fact, an audience member, and I discover that the people constructing the ‘sculpture’ in the centre of this chaotic amphitheatre are visitors, just like me. We are invited to play with the items littered around the disorderly space. Picking up a fluoro pink mesh strip, I gingerly place it on the sculpture. The people around me smile and chuckle—we are not only interacting with the performers, but with each other. 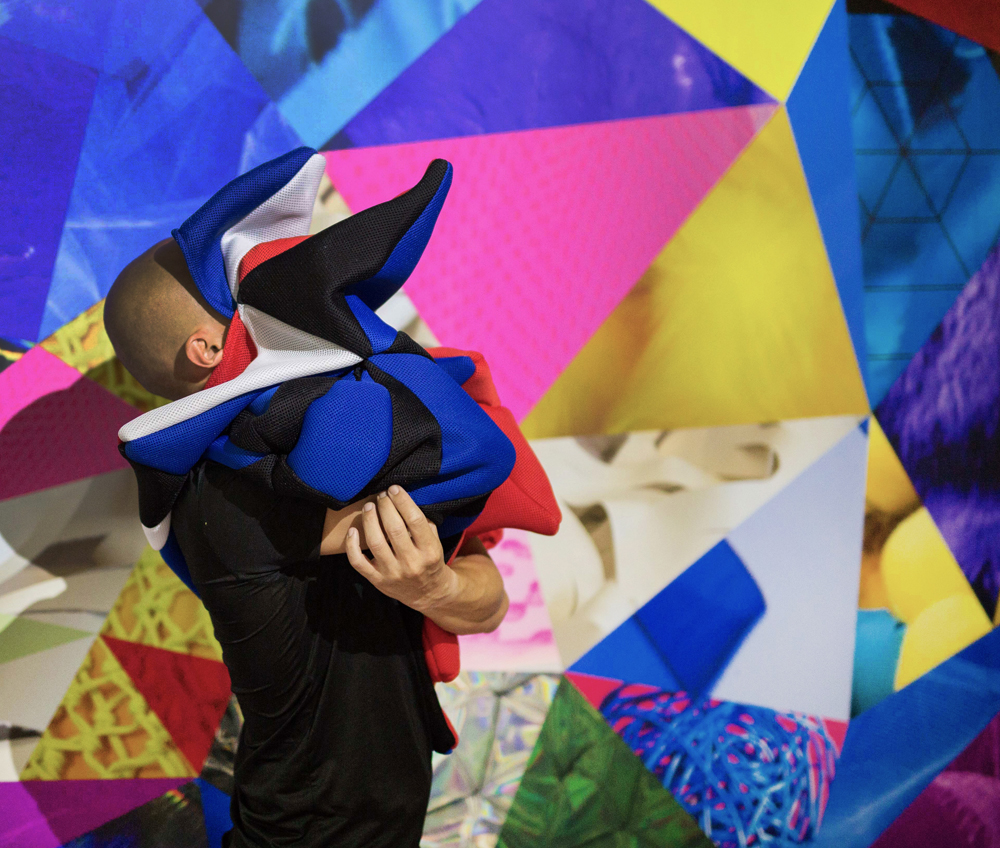 Hence, xhe emphasises active ‘audienceship’ over passive spectatorship, subverting the unidirectional transmission of ideas that often occurs in the tripartite structure of artist/artwork/audience. Subsequently, the performance illuminates the contradictory and paradoxical nature of community-building—we are united with a shared goal, but we are also individuals and strangers with divergent views. Community is not a gestalt, but rather a composition of the subjective and the singular. Indeed, even this review can only come from my own, subjective, lived experience of xhe. In this way, the performance acknowledges and dramatises the plurality of perspectives that constitute community and audience, and conflates the role of performer and viewer.

It may then be argued that xhe is drawing upon the theory of relational aesthetics. First espoused by Nicolas Bourriaud in 1998, the theoretical term has now been canonised and circulated in the art world, academe and the curatorium at large (perhaps to hackneyed effect).1 Nevertheless, the egalitarian ethos of relational aesthetics and its emphasis on individual subjectivity, community and the immaterial, has seen the democratisation of art practices and spaces. In xhe, the acknowledgement that everybody in the audience has different desires, perspectives and gazes, is reflected in the undefined structure of the performance. Depending on the time you arrive, where you sit, which ‘performer’ approaches you, everyone’s experience and engagement is inherently different. This improvisational milieu encourages people to interact with whatever object they may find, while also challenging the conventional and rigid structures of theatre, performance and dance.

However, as Stewart Martin and Claire Bishop have argued, performances based on relational aesthetics can easily fall victim to neoliberal and capitalist ideologies because of their position within the art circuit (which is inextricably bound to money).2 Instead of creating a shared sense of community and authorship, such social encounters are often exploited for capitalist exchange, and the participants themselves become commodified. As Martin observes, ‘Bourriaud partakes of a common form of political fetishism which thinks that the eradication of the ‘objectivity’ of the commodity eradicates capitalist exchange.’3 Instead, Martin argues that ‘capitalist exchange value is not constituted at the level of objects, but of social labour, as a measure of abstract labour.’4 Such a contradiction is reflected in the circumstances of this performance where tickets to attend are $40 each.

This provokes the question, what happens when you monetise a performance that is inherently about democracy, play and possibility? In their artist statement, Kok and Shimizu write that the performance looks to ‘audienceship as a political question.’ I found myself asking this political question: ‘if I was not able to get a free media pass, would I be able to come here?’ As a young woman of colour trying to juggle work, freelance writing and university, the answer would be a resounding no.

Kok and Shimizu further state that xhe is ‘a space of infinite possibilities and potential’—xhe can be anything and everything, for those who can afford it (and those who can largely belong to a certain class, age and race). As long as the diversity of the audience remains bound to socio-economic factors, the freedom to move, play, experiment, and perform belongs exclusively to the privileged. The very heterogeneity of the audience that xhe is attempting to highlight is restricted, and xhe’s stated aim to conflate the distinction between performer and audience member is thereby compromised. As long as this fiscal barrier exists, there is a failure in the revolutionary, radical praxis and possibilities embedded in the work. 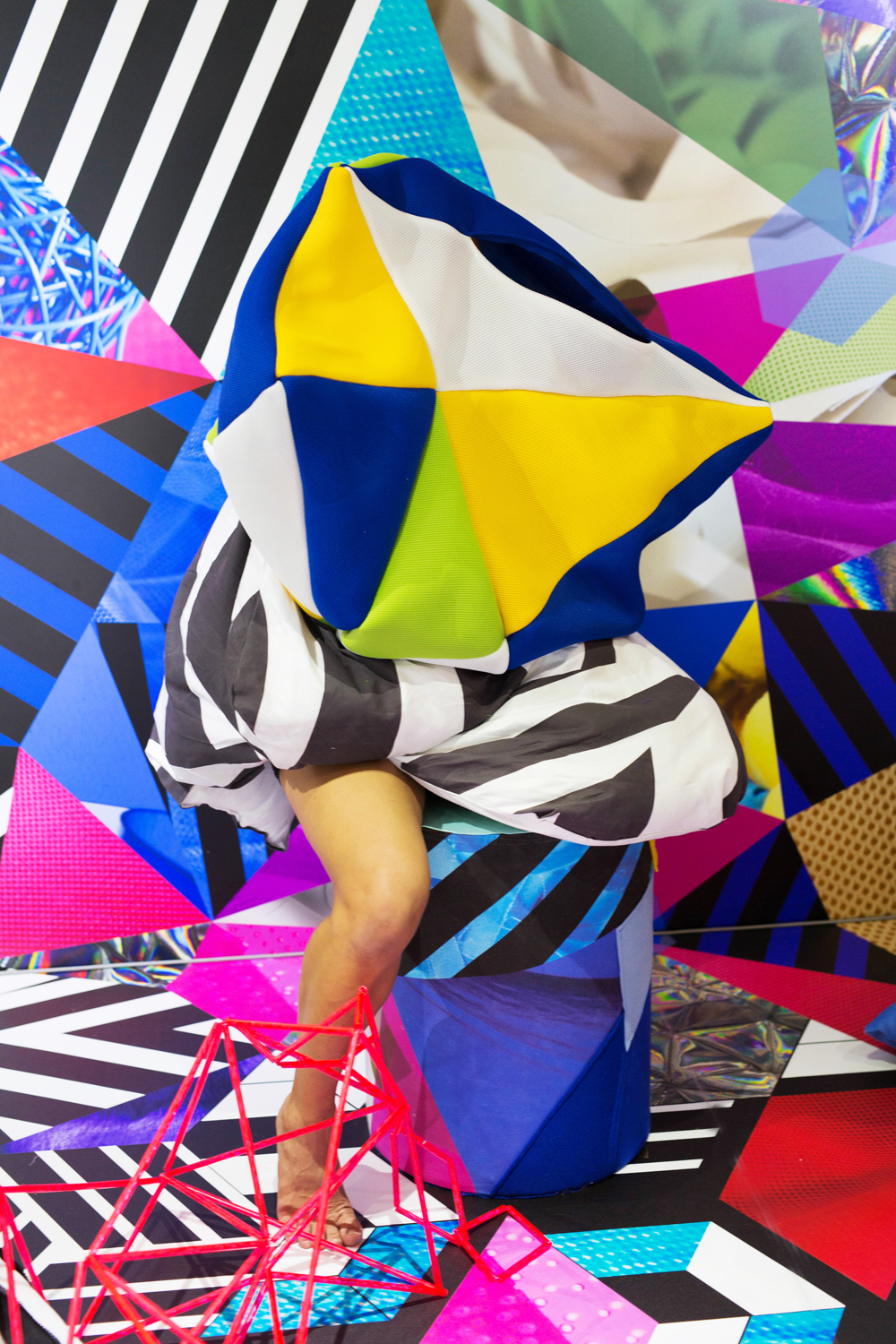 Whilst Performance Space’s commitment is fantastic in other areas of accessibility (especially in regards to disability), issues of economics and class remain largely undiscussed. But the organisation is not alone in being guilty of high ticket prices—it’s part of a city-wide predicament, where most ticketed exhibitions at major institutions run over $20. Indeed, any negotiation between funding and ticketing is a precarious and contentious balancing act, especially for non-profit organisations like Performance Space. Such issues also stem from the larger, and oft-commented on, problem of the dearth of public funding. The budgets for these types of spaces are not transparent (so may only be surmised through speculation), but it is clear that Performance Space is reliant on government organisations (such as the Australia Council, Arts NSW and Visual Arts and Craft Strategy) as well as private organisations (such as the Naomi Milgrom Foundation and the Keir Foundation). Does the onus for accessibility then lie with these donors and sponsors to fund a more accessible admissions policy? Or does it lie with Performance Space themselves to consider refining the scope of their programme and relocating funds to accessibility?

There is no formulaic or simple answer to these questions. However, though it may be pragmatically impossible to establish and maintain free admission or a pay-what-you-can policy, it should still be a vital matter of consideration for organisations and institutions. At the very least, more conversations around class need to happen in order to see more organisations commit to diversity, and do justice to works like xhe.

When I left the performance, I was euphoric. After spending two hours in Kok and Shimizu’s colour world, I had been instilled with a sense of play and child-like wonder—imagine the liberating possibilities if such a space could be open to all.