I went to see PAINT 17 because of a photo on the gallery website.
It’s of a painting by Gary Smith that shows multiple layers of smeared, scraped, thick resin and paint in pinks and oranges and creams and yellows and reds, with bits of black in some places. In some parts the red is mottled through with cream, giving it the look of raw supermarket meat. The overall effect is of a rancid fleshiness. And puss. With the texturing and the mottling of the paint, and the way the horizontal lines of fleshiness intersect with the vertical splotches of pussiness, it’s as though Monet has taken acid and wandered into an abattoir.
Smith’s is one of three solo exhibitions that collectively make up PAINT 17 at Artereal Gallery. The others are Reclining suite by Teelah George and The Kandinsky has two sides by Lionel Bawden.

The painting displayed on the website, ‘Alchemy 5’ (2017), remains my favourite of Smith’s works and forms part of his larger ‘Alchemy’ series. Many are painted directly onto mirrors and include patchy or transparent sections. This gives them a depth that shifts as the colours in the room shift. Multiple layers of paint and resin have been applied and sometimes scraped away, lending each the energy of contrasting colours and textures. As Smith’s title implies, the abstraction at work is material rather than conceptual. The paint and resin speak for themselves. They shine and blend, or tear, or become muddy in some places. 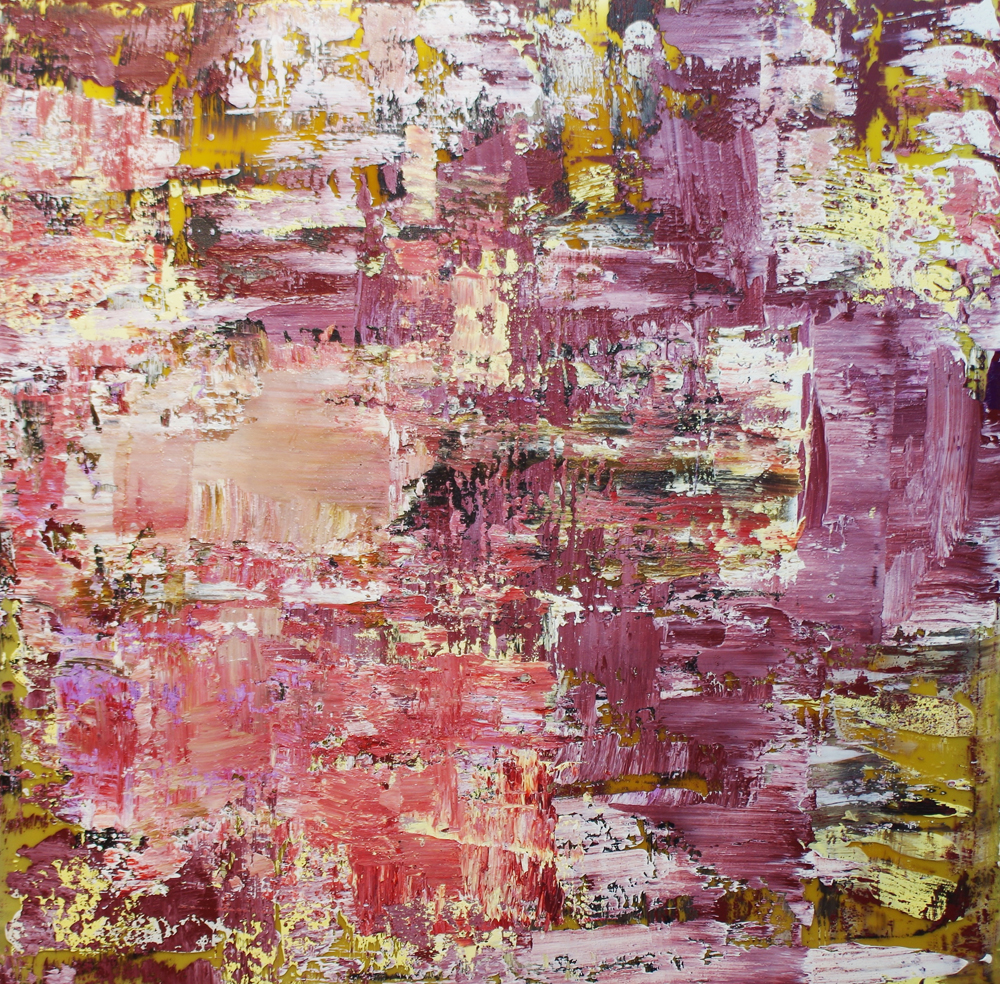 Gary Smith, Alchemy 5 (2017)
Oil and resin on mirror
Courtesy of the artist and Artereal Gallery

Much of Smith’s dynamism comes from the way the layers of material then interact with the gallery lighting. Happily, there is also something to these works that stops them crossing that deadly and porous border into sofa-art-abstraction. I think it’s the visceral ugliness that’s also at work here – another painting I liked had the appearance of ice-cream melting into a bloody oil-slick.

Like Smith’s paintings, Teelah George’s works are a form of gestural abstraction. But whilst Smith shows off the paint in its alchemical self-presence, George’s paintings seem inclined to show as little as possible. Each is a palimpsest where a simple surface seems to erase the complex effort preceding it. The materials and fabric layered onto the canvases are very present, but obscured, as though a deep communing with the fabric has gone on at some point in the past, but is now hidden from view.

One painting, for example, has a lovely sky-ish blue slathered thickly over a brown cloth canvas. There is a clear ridge of cloth one third of the way across, running the whole length (it’s not a large work). Here and there around the edges patches show through of something now mainly hidden. Some black marks, a hand or tree perhaps, appear in one place only. Everything else is obliterated by the surface blue.
The effect is somewhat disturbing. A long process of agonising effort seems all the more present precisely because of the way it has been so thoroughly obscured. This is what George’s paintings feel like – a memento angst for acts of creation. 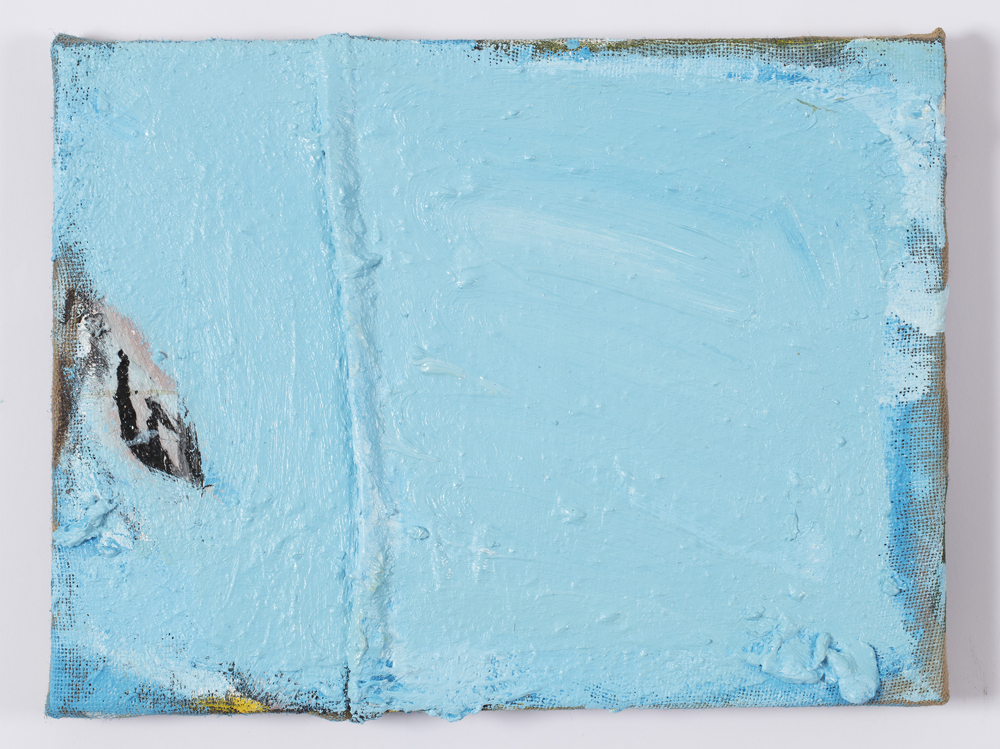 With Bawden’s exhibition, The Kandinsky has two sides, I was initially unimpressed. The works consist of arrangements of cereal boxes. Each box is painted in a colour, and then decorated on the opposing broad sides with images or, more often than not, phrases from everyday life. These images/phrases are done in attractive designs, sometimes recollecting earlier artists (such as Barbara Kruger), but also recalling the sorts of designs that you see printed on t-shirts. One example, ‘GIVE/TAKE’ (2017), shows the word ‘give’ on one side and the word ‘take’ on the other.

The exhibition’s description promises ‘aphoristic insight and philosophising on the randomness of thought and the nature of dualities.’ Bawden, when writing about the work ‘Instead (Yoko)/We Need Milk/YOU ME’ (2017), suggests that the words ‘We need milk’ caress ‘the form of the work – milk meets cereal and is literally one of the most common texts sent between my Lover and I, between amorous affections.’ I thought I saw the point. The un(der)regarded language of domestic intimacy and consumption comes to the surface of the cereal box, transforming the everyday into a dazzling, marketable newness. Our intimacy lies between give and take, between the box of cereal and the milk that gently pours into it, both mass-produced and personal. Like I say, I was initially unimpressed. 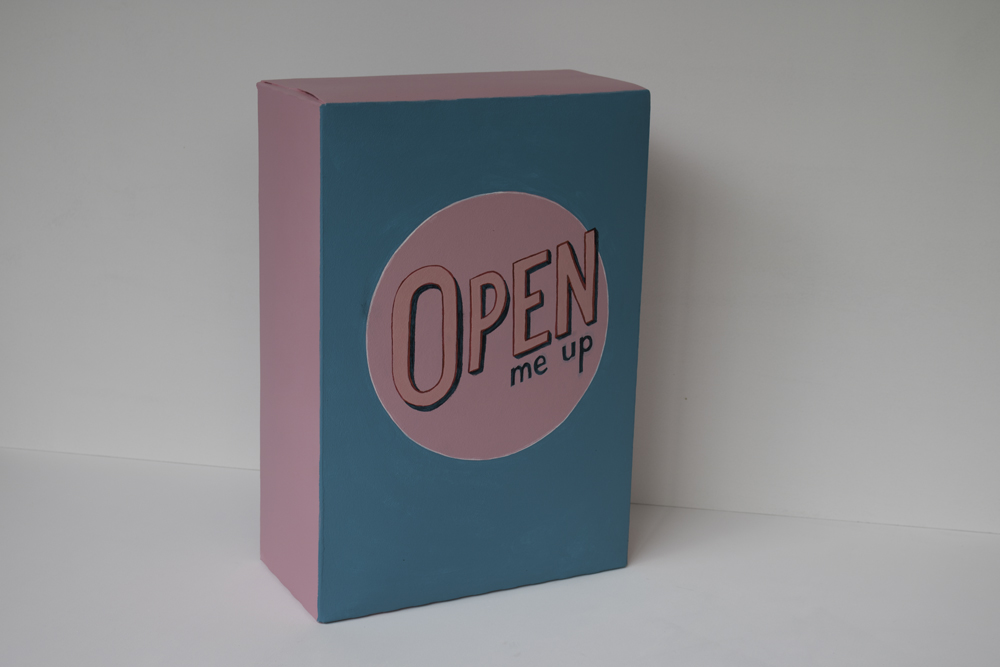 Lionel Bawden, The Kandinsky has two sides. Open me up / Shut me down (2017)
Acrylic paint, pencil, gesso, matt varnish
on cardboard cereal packet
Courtesy the artist and artereal gallery

But as I went to look over PAINT 17 again, something strange happened. Whilst Smith’s were the works I most enjoyed looking at, it was Bawden’s that I found I couldn’t stop thinking about. I had initially disliked his exhibition because it all seemed too easy; too easy to think and too easy to justify. And yet I found myself suspecting that Bawden’s work was far more cynical than I had first assumed.

If ‘We need milk’ is a profound statement precisely because of its non-profundity, and because its material presence in domestic life makes it far more central to us than ‘amorous affection’ (if unregarded), then the painted cereal boxes become interestingly hollow. Rather than transitioning ‘the humble, off-the-shelf, limited life packets of cereal’ into ‘vehicles for the artist’s aphoristic insight and philosophizing’, I find the reverse is true.

When I went to see the exhibition Bawden himself was there, explaining the exhibit to people who looked suspiciously like parents and/or grandparents. These were things ‘people just say’, he was saying, empty and just, really, taking up space. The domestic and the intimate were being rendered hollow, cheap, and two-faced. The point, I suspect, is that commodity domesticity takes over both our means of being intimate and our means of thinking about that commodified intimacy. Perhaps this is what Bawden means when he writes about thinking about thinking. This is who and what we are, the surface layer over a cereal box in our self-introspection, in our self-motivation, in our pre-packaged affects, in our post-truth, post-sincerity, post-inspirational culture and economy.

In his comments on the exhibition, Bawden says that ‘I could literally continue this series forever and swap out every work/word here for any other.’

I believe him, and I am terrified.