A cheerful appliqué banner reading ‘The hooved and the clawed will consider their violent bond’ welcomes visitors to Katy B Plummer’s exhibition currently showing at Galerie pompom. Through a series of video and multimedia works, Plummer tells of an allegorical romance between a lion and a lamb: where the lion, dressed in a vaguely zoomorphic colonial dress with six bedazzled nipples and long red acrylic nails, confuses hunger for lust and mounts and dismembers a sheepish man in a blue frockcoat.

The title of the project is biblical, but ambiguously so: of the two passages in the bible describing the coming together of animals with hooves and claws, one describes the restoration of a prelapsarian idyll under the stewardship of the messiah – wolf and lamb, leopard and kid, lion and calf all happily cavorting – while the other, an apocalyptic passage from Revelation, describes Christ as both a lion and a mutilated lamb with seven horns and seven all-seeing eyes.

Plummer frames THE HOOVED AND THE CLAWED as a response to Norwegian dramatist Henrik Ibsen’s A Doll’s House, where a young housewife, frustrated with the inability of her husband to understand her or appreciate her contributions to his continued comfort and success, suddenly abandons him and their children. It is a startling act of self-emancipation from the constraints of nineteenth-century domestic life. 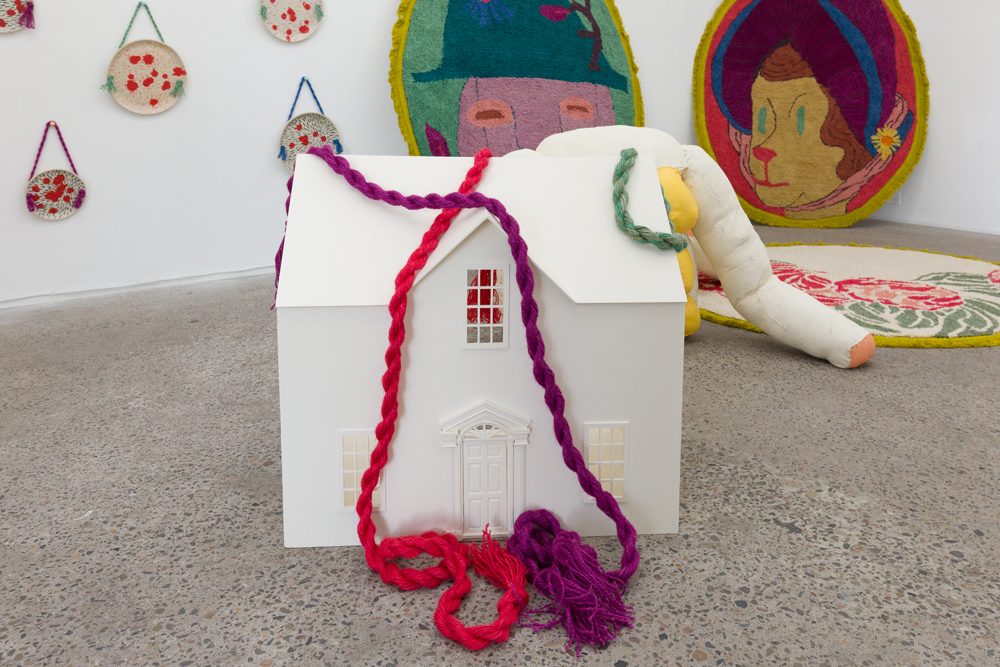 The combination of embroidered textiles, household ceramics, and cartoonishly diarist video works that make up THE HOOVED AND THE CLAWED recall a tradition of women’s art that is poorly served by critics. In the common description of works by female artists that dare to employ typically feminine materials and techniques to address themes of personal identity or sexual politics as ‘confessional’, ‘raw’, or ‘subversive,’ critics reveal an underlying assumption that it is some kind of absolvable failure for women to have or express complex feelings.

Aside from serving as a reminder of the persistence of sexism in cultural commentary generally, the use of this kind of language also indicates a significant failure to establish a critical framework for the discussion of contemporary decorative arts. This is itself an indication of a failure to value conventionally feminine aesthetics, and unfairly implicates conventional craftswomen in their own cultural oppression, as if women have not always used the tools available to them to document their understanding of the world.

It’s a critical language applied to work by a variety of twentieth-century and contemporary female artists united under the broad umbrella of ‘feminist art’ referenced in Plummer’s work: Louise Bourgeois’ Femme Maison (1946) a series of illustrations where the bodies of women are depicted turning into houses, and her latex costumes (c.1970) adorned with quasi-mammalian teats; Judy Chicago’s The Dinner Party (1979), a fifteen-metre-wide dining table featuring embroidered place settings depicting the vulvas of 39 mythical and historic women; and Tracey Emin’s Everyone I Have Ever Slept With 1963-1995 (1995), a tent appliquéd with the names of previous lovers, friends, and family members.

The materials and techniques used by Plummer to construct her tableau of violent technicolour domesticity are conventionally feminine: appliqué, tapestry, needlecraft and ceramics, but here they are finished with a roughness that demonstrates no particular joy in the mechanics of craft. In building a coarse and savage interior for her lion to roam, Plummer reveals what is already hidden in the private tidiness of domesticity: women working slowly to remake the world – with all the quiet violence of a nail piercing skin, or a needle pulling thread.