There are four, no, five Twitter accounts that I look at on my Chrome browser every day (and update multiple—multiple—times), but, because I don’t have a Twitter account, I tell myself that I am not on Twitter. We may be overloaded—‘stuck in the present as it reproduces itself without leading to any future’—but we still refresh our feeds. 1

I am anxious because I am unsure what to do with the resulting feeling: the impotence that comes with the rapid ingestion of world-wide missives when you have (at best) limited control over the events contained within them. Switching off in this moment of political and environmental crisis doesn’t seem like an option, but, given the meat-grinder that is the twenty-four-hour news cycle and the hyper-exclamation of social media, we will never not be in a state of crisis. This flood doesn’t have an end; that levy has been breached.

How is it that we are to understand, and exist within, this era of social, political, and technological fragmentation?

These are the questions that Peter Alwast is considering in his latest solo exhibition, Making Sense, now on view at Gallery 9. The show brings together two disparate strands of Alwast’s practice: on the one hand, there are mixed media abstract collages, which feature an assemblage of layered and cut giclee prints, paper, ink, oil, and pastel; on the other, there are small-scale figurative works on hessian. The first grouping is machinic and futurist in its metallic sheen; the second series contains more intimate depictions of the human and leaks with contemporary anxiety.

In viewing Making Sense we are being asked to take these counter and contradictory approaches together, and the initial effect is one of disorientation. But such a way of dividing up the works seems beside the point, and a move, I imagine, Alwast has little time for. (It’s also a mode of categorising that may be on the way out—those who have grown up in the shadow of Facebook, who will never know a world without the Internet, seem content when asked to parse such mash-ups of discordant information.) I like to think of Making Sense as a montage, where your eye must cut between in order to establish points of connection. Because isn’t that the only way to make sense of our contemporary moment, to know that it is all there, that it is all happening, all at the same time, and it is up to us to decide how to respond to it. 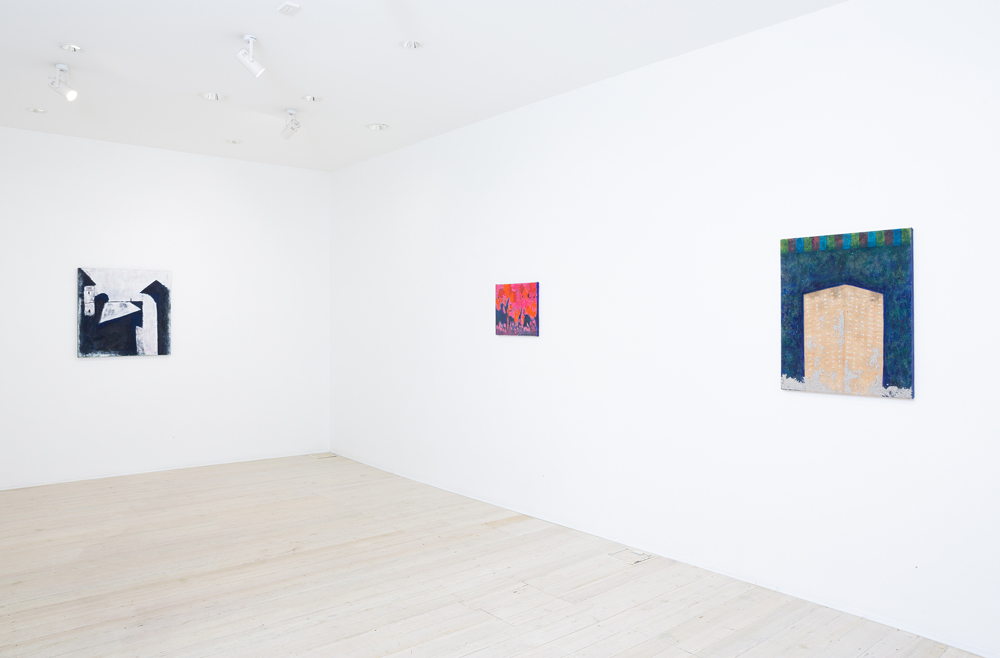 Unity does come through the materiality of Alwast’s objects: there is the bready crust of the pumice gel and rabbit skin glue, the fragile sprays of glitter, and the way the gauzy hessian peeks its way through the oils. These are tactile works that arrest you in the moment, and as much as Alwast is preoccupied with the impacts of automation and new technologies, he is also rejecting a virtual space where the body of the viewer becomes redundant. That is, to apprehend such work requires us to be physically present in space.

‘Gathering’ (2018) depicts a crowd of eager faces—some holding up flags while others crane or push forward towards something unseen. Red and magenta plumes envelop these figures, and conjure up scenes of a Trump campaign rally. To be sure, this gathering is not named—it could be an anti-fascist rally or even a mosh-pit—but the thick glee of the faces, the gaudiness of the red (a colour whose symbolic value is now co-opted) suggests otherwise. ‘Gathering’ is set against the more muted ‘The Dance’ (2018), an ethereal and utopic vision of a circling group of figures, each holding each other by the hand, gentle and placid in their embrace.

Skyscrapers and towers appear across Alwast’s works: in corners (‘Yellow Lane’ (2018), as dissembled abstract forms (‘The Count’ (2018), or as the focus of the entire painting. ‘The Grenfell Tower’ (2017) shows an excised section of the building, its middle floors reduced to a burnt-out husk, while ‘Finance Tower’ (2018) looms in centre view—more solid and firm against the evening sky.

Whether naïve or abstract in their depiction, Alwast’s works perform a type of flattening—a process which removes obfuscation and allows for brief moments of clarity. The more time I spend with Making Sense, the more I feel that the exhibition uncovers (either accidentally or by design) what we intrinsically know does makes sense, what we deeply understand to be true: that human beings are instinctively drawn to tribalism, in all its varied modes; that two towers may look the same—bear the same shape and design­­—but they will not be built with the same materials, and their inhabitants will not be afforded the same care; and, that in our desire to make sense of our existence, in our fumbling for certainty and control and progress, human beings have always invented technologies that then disrupt and threaten this existence.