This is the first instalment of Running Dog‘s feature series responding to individual works in The National 2019: New Australian Art—on view at the Art Gallery of New South Wales, Carriageworks and the Museum of Contemporary Art, and curated by Isobel Parker Philip (AGNSW), Daniel Mudie Cunningham (Carriageworks), Clothilde Bullen and Anna Davis (MCA).

‘My entire Oeuvre is against the police’
Miguel James

We recently became parents, and so have been thinking about how to raise a child in a country haunted and shaped by the ongoing violences of settler colonialism. At some point someone asked us what we most feared about raising a child, to which we replied: that they become a cop. It was a throwaway response at the time, but it contained a truth that has stayed with us, since to be a cop is to uphold settler sovereignty. In the settler colony, the police serve to preserve and protect private property which, along with the right to possess, is foundational to the state’s sovereign claim. This conception of possession is defined by European cultural and agricultural practices, which has the consequence of equating whiteness itself with property. The assertion of whiteness as property is upheld by the rule of law and its armed extensions (the police and the military), which, as Cheryl Harris tells us, provide ‘not only a defence of conquest and colonization, but also a naturalized regime of rights and disabilities, power and disadvantage.’1 And so, to us (as a white and a non-white settler), to be against the police is to be against an institution that embodies and enacts what Aileen Moreton-Robinson calls the ‘possessive logic of patriarchal white sovereignty.’2 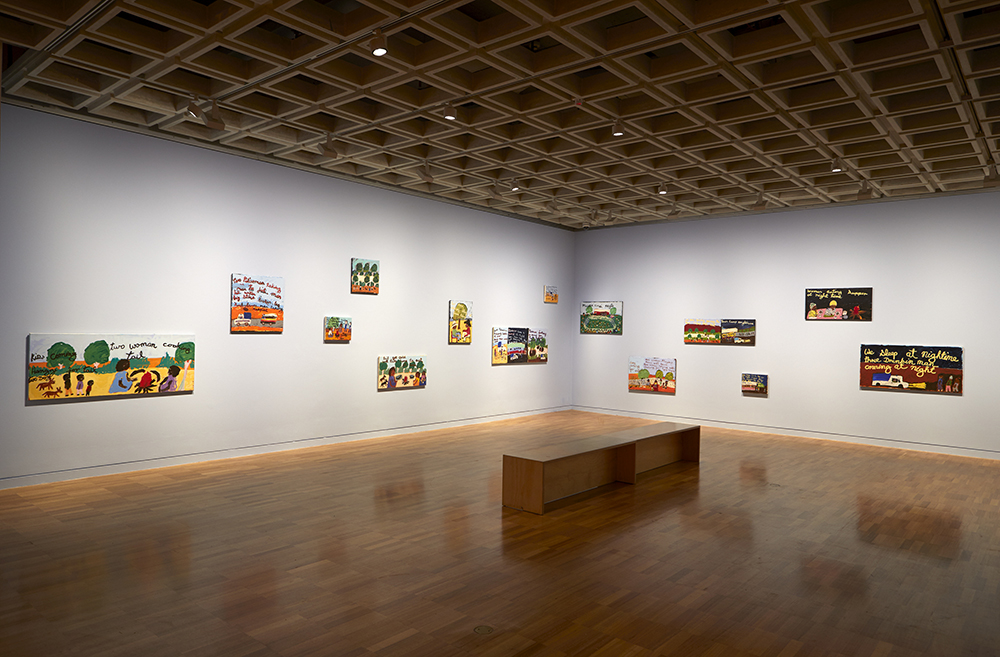 We write this on the twenty-eighth anniversary of the Royal Commission into Aboriginal Deaths in Custody and since the commission released its findings, there have been more than 400 further Indigenous deaths, with no charges laid against perpetrators. We write this as the Northern Territory Intervention continues into its twelfth year of operation as a state of exception enacted under false pretenses. Settlement, as the historian Patrick Wolfe tells us, is a structure rather than an event.3 It is this sense of ongoingness that Sally M. Nangala Mulda’s paintings reflect. Exhibited at the Art Gallery of NSW as part of the 2019 exhibition, The National: New Australian Art, Mulda’s paintings depict scenes of everyday life from Abbott’s Town Camp where she lives, near the bed of the Todd River in Mparntwe (Alice Springs). These scenes include acts of survival, resistance, care and play, all conducted under the constant surveillance of the police. The police figure across the series of paintings as antagonists—moving on, hassling, confiscating, warning, watching. The refrain, ‘no trouble here’, appears over and over again in these paintings, a fragment of text rendered in Mulda’s loose cursive script that figures as both a response to police interrogation and to being always-already criminalised by the state. The criminalisation of blackness in the collective unconscious is, to paraphrase Frantz Fanon, the very foundation of white (settler, liberal) society.

The installation features numerous paintings, large and small, that are hung at a range of heights on the gallery walls. These works crowd in on each other, showing us the overlapping registers of life in the Town Camp—scenes of joy (a football match between the Magpies and the Eagles), scenes of kinship (a family at the creek), scenes of drinking and sleeping, and always scenes of policing. Mulda’s paintings render these scenes in a two-dimensional plane with thick, layered brushwork and bold colours. Her script is overwritten onto the canvas, often beginning as though a caption but then running on or spilling into the image—language imposing itself on the tableaux. 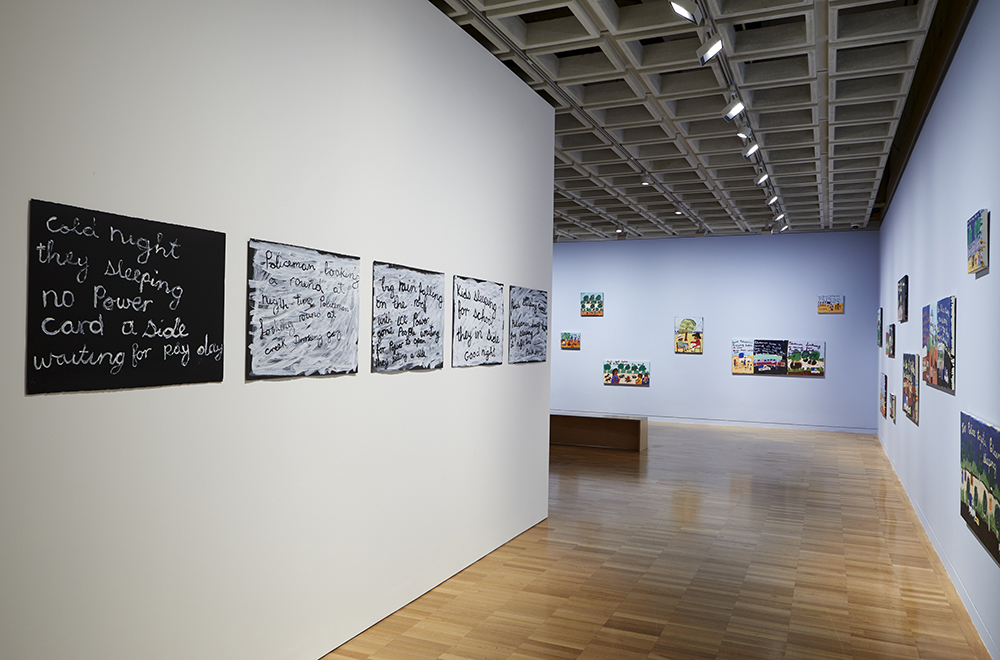 ‘Town Camp Anywhere’ (2018-2019) features acrylic cut-out paintings of a Town Camp (a fence, a car, a single building, trees, two women sharing a meal around an open fire, two men chatting while a camp dog sleeps between them). The cut-outs are fixed to a gallery wall, painted a dark ochre tone, and could be installed in myriad different arrangements. The work and its titling gesture to the precarity of the Town Camp as housing infrastructure, and the dynamism of the relationships within them.

In several text-only paintings, black and white paint is used to produce graphic blocks for Mulda’s dynamic handwriting. Many comprise a black background, with a scrubby white overlay and black writing; others feature white writing on solid black. In the first kind, black text overwrites an unsteady, chaotic, shoddy and obviously constructed whiteness that reveals its black foundation. In the second kind, deliberate white writing—in which letters are traced multiple times with a paintbrush at different stages of saturation, and in which the physical act of painting animates the text—points to a different kind of constructed whiteness: whiteness as the reiterative, repetitive, bureaucratic voice of the state.

Mulda’s narrative style mimics the pedantic, forensic language of the state while at the same time showing that such language tends to obfuscate its subjects—people who live and die. Mulda’s frank descriptions of the Town Camp index the countless different ways that black life is both constrained by, and always in excess of, white law.

Together, the paintings in the exhibition are quietly unsettling, staging a series of encounters that produce both minor affects (annoyance, confusion, amusement, affection) and their major implications. Engaging with the paintings, we feel the enormity of living under occupation, as well as the conviction that such enormity can never be total.