This is the second instalment of Running Dog’s feature series responding to individual works in The National 2019: New Australian Art—on view at the Art Gallery of New South Wales, Carriageworks and the Museum of Contemporary Art, and curated by Isobel Parker Philip (AGNSW), Daniel Mudie Cunningham (Carriageworks), Clothilde Bullen and Anna Davis (MCA).

When I first visited Berlin, I met someone who lived in Schöneberg; a quieter more affluent district south west of the city centre. Following an afternoon of sex, wine and cigarettes, we watched as the sun set over his apartment: a bubbling, purplish auburn burning through the sky in a gradient halfway between a bruised apple and a ripe persimmon. Below us were throngs of people making their way towards an otherwise nondescript building next to ours, amassing like atoms on the city’s concrete paving. It wasn’t until we decided to go for a walk that we realised these were fans of David Bowie. News of his death had reached the city, and with it came the prosaic offering of bouquets and hand-written cards strewn outside the apartment where he once had lived.

Leaving the admirers with their grief, we wove through back streets far enough until the chorus of Bowie chants could no longer be heard, settling on a bench in a narrow playground sandwiched rather strangely between two houses.

You’ll find these playgrounds all across Berlin—
They’re the remains of where houses once stood
before being bombed by the Allies in the siege.
Empty space reminds suburbia that the war happened;
Grief is written into Berlin’s urban planning.

A few days later I returned to this area alone. Wrapping my coat around me, I walked around Schöneberg looking for where these unexpected playgrounds might be. When I found these sites, I would stop to observe how bare trees stroked the walls that enclosed them—imagining a moment where bombs rained down from the sky, incinerating homes and other buildings to leave behind voids which, decades later, would become spaces where children gathered to giggle and lovers met to kiss. Now, years later, I still struggle to articulate the feeling that propelled me to seek out these historically loaded but otherwise banal scenes. And yet, many continents away from home, these sites imprinted themselves onto me. And although, for a time, I had forgotten them, they emerged again as I stood in front of Nat Thomas’ artwork ‘Postcards from the Edge’ (2019).

‘Postcards from the Edge’ visually borrows and conceptually reshapes the 1990 film of the same name, the narrative arc of which follows Hollywood star Suzanne Vale (played by Meryl Streep as a cipher of Carrie Fisher) recovering from, and reckoning with, drug addiction. Presented at Carriageworks as part of The National 2019, ‘Postcards from the Edge’ invites us to lie face down on a platform, which gives the impression that one is about to fall off a tall building. The work is a direct reference to the film’s iconic shot of Streep in the same pose; her hollow cries for help left unanswered until she becomes comically annoyed, breaking the illusion by letting go of the edge to roll eyes and flail hands. Curator Daniel Mudie Cunningham surmises that Thomas’ appropriation of this scene activates a two-fold criticism of contemporary art: that some works have become hollow spectacles in our Instagram age, and that institutional curating is but slave to the purpose of audience participation. Put simply, in anticipating audience engagement and uploads to Instagram, ‘Postcards from the Edge’ is a reflexive, tongue-in-cheek critique of the institution it sits within. 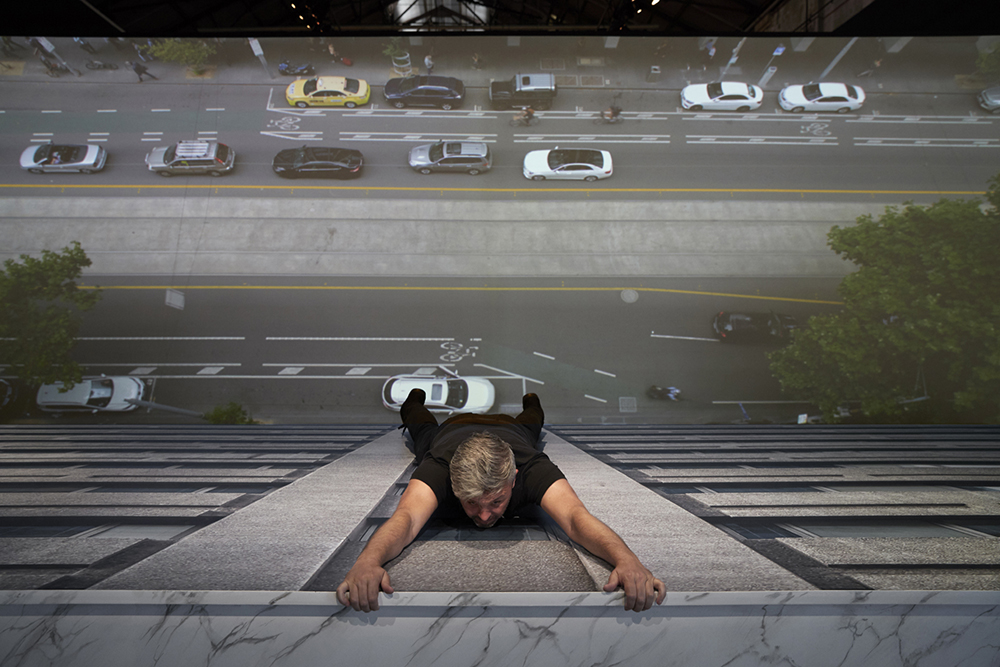 However, the work is also loaded with deeper meanings—the interlocking relationship between social media, art and the falsehood of aspiring towards celebrity. ‘Postcards from the Edge’ is not merely a static spectacle; it is an invitation for the audience to become celebrity. As photographs with the work are beamed onto Instagram, we watch as likes, comments and traction grow: a clear announcement that here lies a clever artwork with an equally clever participant. Through participation, the subject becomes a phantom understudy for Streep, able to embody ‘celebrity’ while safely disconnected from the baggage of addiction and social shame her character actually endures.

In the days before I left Berlin, I witnessed the mourners in front of Bowie’s once-home evaporate. In their place were crowds—more akin to tourists—taking rapid fire photographs with and of the scene. For days, a steady stream of selfie sticks and news crews converged upon the narrow doorway that signified much of Bowie’s life in Europe. If we were lucky we would hear the bootleg sound of a busker crooning Heroes or Under Pressure, but it was mainly the noise of those in search of spectacle that filled the air and rose up into the apartment where we lay. Amidst this raucous atmosphere, the rubble of blown out candles and soggy cards bashed by snow seemed insipid and out of place. If the apartment had at all symbolised Bowie’s artistry it was now a discursively charged site, working to remind fans that he belonged to them. Perhaps, in an abstract and metaphysical sense, Bowie’s death cleaved a rift for his fans in the same way the bombs did for Berlin—his apartment now inscribed with the same intangible, affective sense of grief, history and imagination those strange playgrounds dispersed around the city possess.

The energy oscillating between the living and their memorialisation of celebrity is a sensation that does not crystallise into a neat or precise feeling. Indeed, it is neither melancholy nor aspirational reverence, but rather a shifting negotiation between the two, back and forth, again and again.

When the feeling gets too close to one extreme it recoils and runs towards the other, and certainly back again. This friction is stark and present as I watch audiences engage with Thomas’ spectacle. As shutters click and laughter fills the gallery space, the participatory nature of ‘Postcards from the Edge’ reveals itself to move between the absurd and tragic. If the artwork is meant to render us celebrity, then the spectacle is a falsehood we enjoy because of our vanity. Thomas seems to laugh at us—we are no Streep, Fisher or Bowie. Although her work presents a chance, it is but a grand illusion: one neutered from the actual possibilities of danger and shame the position of celebrity entails.

Perhaps this is a kind of false profundity I have imported into Thomas’ work by virtue of synonymising separate moments in my life. Yet, there is something reflexive in ‘Postcards from the Edge’ that nevertheless connects with these contrasting vignettes of Berlin, and the spaces where I witnessed mourning and haphazard reminders of grief. Read in this way, ‘Postcards from the Edge’ is not so much a spectacle as it is a void—one that retains a feeling or cultural memory so lost in time it can only be felt but never seen. Our participation masks the void, but in laying on that platform, we become it. Thomas cleaves through with keen awareness that audience engagement in contemporary art is not only a farce but a falsehood. She seems to suggest it is better to relinquish our dreams of celebrity, a state so loaded with meanings we will never grasp and histories we will never know. Indeed, vanity becomes us—but perhaps this is Thomas’ gag after all.