Anna Louise Richardson is raising the seventh generation of her family on a cattle farm in country Western Australia, south of Perth. Unbeknownst to her children, looming dangers prowl the inside and outside of their homestead. Her fears surrounding the safety of her children, inherited from family histories as well as her own parenting experiences, bleed into her artistic practice. The family’s pastoral roots combine with the surrounding bushland, unearthing questions regarding the ‘taming of nature,’ which Richardson explores through the achromatic intensity of charcoal.

We should be more afraid of the sun than the moon depicts the dangers typical to domestic life in rural Australia. In her solo show at Galerie pompom, Richardson catalogues the animals and objects that could harm her children and codifies the anxiety elicited from them.

Magpies, tiger snakes, and blowflies stalk the gallery, which has been converted into a domestic backdrop. Similarly, household items like RATSAK® lurk on the walls, while electrical appliances remain unchecked. The gallery takes on a nightmarish form: sprawling drawings of pent-up fears morph familiar associations into something more ominous.

Richardson uses her signature medium of charcoal to full effect, relying on its stark and desiccated qualities. The burnt stick scores the cement fibreboard surfaces. Charcoal recalls the heat of the bush, while the cement fibreboard is emblematic of housing exteriors. Through these materials, Richardson expresses that nowhere is safe; the grit of the bush clings to the tooth of the uneven household surfaces. They merge into treacherous territory. 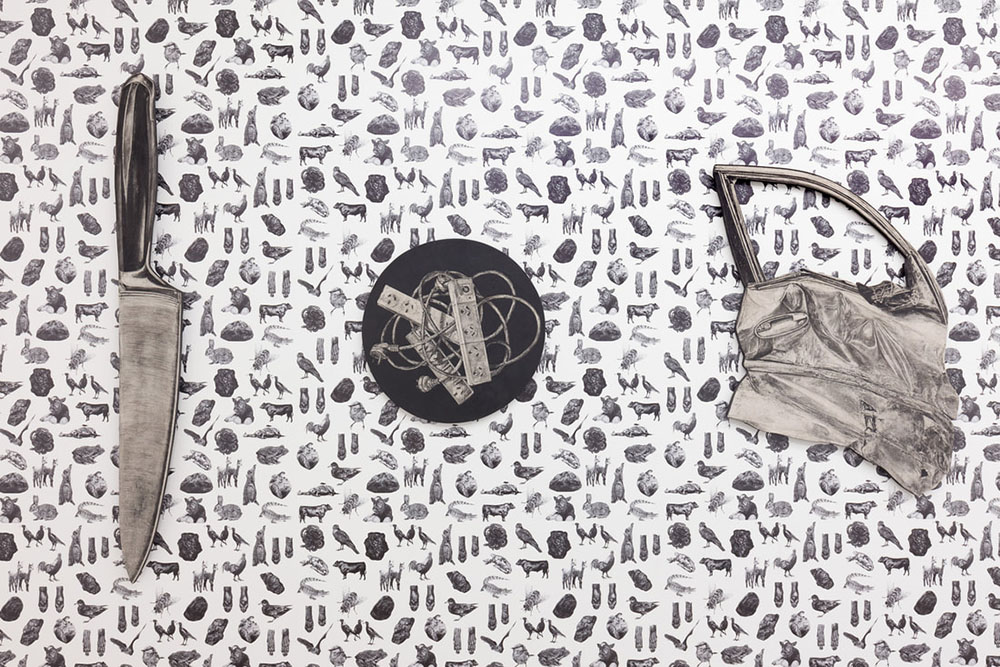 Anna Louise Richardson, We should be more afraid of the sun than the moon (installation view at Galerie pompom), (2020) Image Credit: Docqment

These vulnerable feelings surround the drawings in an unsettling wallpaper installation. The wallpaper features a retrospective collage fashioned from Richardson’s previous works of animals, organs, and rocks. Reminiscent of the innocuous façade of children’s nurseries, this connection to infancy was made more apparent at the exhibition opening, where a pram for Richardson’s children was inconspicuously left to the side of the room. Unlike nineteenth century settlers, who used wallpaper to establish a sense of genteel control in the domestic space against unknown outside forces, Richardson lets the anxiety hidden underneath work its way through the cracks.1 This subversion of decoration challenges the colonial sentiment of a nature that is able to be tamed. Here, the purpose of wallpaper is not to obliterate the past, but rather to reflect on the inheritance of fear over the passage of time, and how it reveals itself over the course of a life.2

Domestic fear is further explored through the cut-out drawings of Ratsak (2019) and Knife (2019), which unsettle surroundings behind closed doors. Meanwhile, the outside barges through in Car Crash (2019) and Tiger Snakes (2019). Sections are laboriously worked up with compressed charcoal, then stripped down and obfuscated with erasers. This process renders parts of the drawing to the point of hyper-real clarity, while other sections are left to expose the rough under-drawing beneath. These contrasts are unbalanced, but form a cohesive picture surrounding the unnerving aspects of human intervention in rural settler Australia.

Although, there is an outlier within this dry meditation on danger. Power Boards (2019) is surrounded by a dull sheen of ink, capturing the glimmering light from the unpredictable brush strokes. The idea of Richardson tracing around the appliance drawing with a wet medium, as if to cause a volt of electricity, conjures an uneasy feeling from the work. Tiger Snakes (2019) mirrors the coils of the chords, bringing a zoomorphic quality to the appliance. Like silhouettes in the dark of the night, the ambiguity of these forms and their shared size could lead one to mistake a shape for another. The intertwining of these forms is fitting, with the fear of latent domestic danger being shared with the encroachment of the bush.

These blended forms produce a threatening aura, similar to Frederick McCubbin’s ‘Lost’ (1886), and indirectly conjures the ‘lost child’ trope that haunted early Australian art as a stand-in for the bush as a place of anxiety. Affrica Taylor states that ‘within these recurring tales of lost children, crude binary narrative structures consistently position the wild Australian bush and savage Australian natives as other to cultivated European natures and civilised/civilising European subjects.’3 Likewise, Bundjalung poet and researcher Evelyn Araluen argues that ‘in this settler/native binary, the safety of the child is predicated not simply on their return to the scene of the settler homestead, but their disavowal of uncivilised or transgressive behaviour.’ The bush is shown to be both enticing and foreboding, and by incorporating the perspective of domestic danger, Richardson’s work can expand and question how this narrative is situated. There is no indication of a desire to tame the land. Animals don’t act as guides or mentors to the child, and the danger follows them back home. Intergenerational notions of safety are destabilised—Richardson’s objects distort and balloon, as if one sees things from the perspective of a child.

By the same token, these rural depictions are viewed through the lens of an urban audience at Galerie pompom in the densely populated inner-city suburb of Chippendale, Sydney. Richardson comes out of a vibrant Western Australian art scene, which has often been overlooked by an apathetic arts industry.4 This perspective on the anxiety of raising a family in rural Perth has not been regularly expressed in the national conversation on Australian art, with much of the imagery surrounding the nineteenth century rural myth having been created in the two urban centres of Sydney and Melbourne.5 Now Richardson, drawing back through intergenerational experiences, can help this scene work its way outside of those depictions towards something distinctive.

The rural meditation found in We should be more afraid of the sun than the moon is scarcely seen with such depth in city-bound Sydney and offers a more localised glance into the nuances of regional living over the passage of time. It is a masterful exhibition in both its impeccable technical prowess and its deeply sensitive curatorial structuring. In doing so, Richardson provides an insight into the often-unspoken anxiety, both inside and outside, that surfaces when raising a family.