This is the third instalment of Running Dog’s feature series responding to individual works in The National 2019: New Australian Art—on view at the Art Gallery of New South Wales, Carriageworks and the Museum of Contemporary Art, and curated by Isobel Parker Philip (AGNSW), Daniel Mudie Cunningham (Carriageworks), Clothilde Bullen and Anna Davis (MCA).

After receiving my Australian citizenship at six years old, I went to my first barbeque—a final initiation ceremony in becoming a true blue ‘Australian’.

The image I have of this milestone is of the detritus my family and friends left behind: crusts of Wonder white bread, greasy aluminium foil, and cordial-stained polystyrene cups strewn around the park picnic tables. These cups, semi-crushed, disintegrated into stark white globes, which then floated into the bushes, and seeped into the soil, or became tangled in the weeds.

I am reminded of this wreckage when watching James Nguyen’s video work ‘Portion 53’ (2019), on display as part of The National 2019 at the Museum of Contemporary Art. This three-channel work depicts Nguyen and his parents returning to the site of the East Hills Hostel in Holsworthy, where Nguyen’s father arrived from a refugee camp in Indonesia in 1983. Consisting of slow, quiet shots of the site, we follow Nguyen and his parents as they collect rubbish in the surrounding bushland, in particular, polystyrene. For Nguyen and his parents, this site marks their first contact with Australia. But it is also a site of cultural significance for the local Dharawal/Tharawal people—forcibly removed from this land in the 1940s to make way for a series of military structures, which would become, in time, the hostel for postwar migrants and refugees. When placed in this context, polystyrene becomes a motif of displacement and discomfort—we see how this insidious and fallaciously benign material has invaded the landscape. What happens when the displaced displace others? 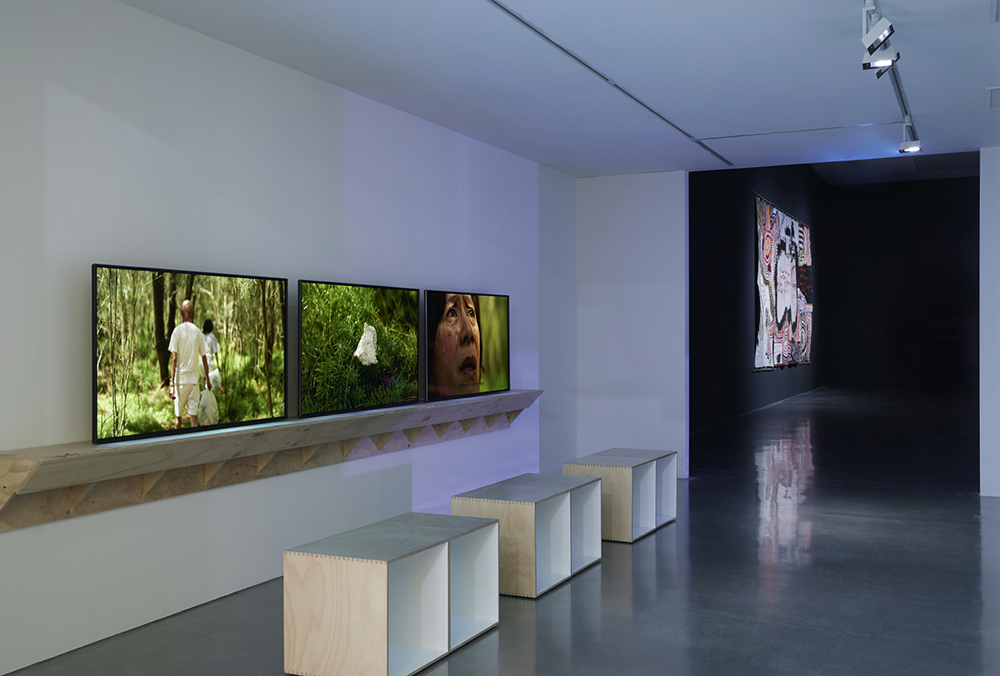 Sixteen years later I sit down with my mother in the same National Park, amongst banksias, weeds and crushed Styrofoam cups. A distance exists between me and her / a distance exists between me and here. Stumbling through forgotten Korean, I try to ask her about citizenship and what she knows of First Nations sovereignty. But my clumsy tongue trips and falls over the clipped endings and the nasal tones. And yet in English, I can only do so much to address the displacement my own community has perpetuated.

Nguyen’s work represents a crucial development in Asian-Australian art. The diasporic narrative in this context has often been formulaic, and focused on Homi Bhabha’s theoretical conception of the ‘third space’—an encapsulation of our existence within the liminal spaces of nation-states. The production and reception of Chinese-Australian art may be taken as a case study of this narrow framework. As historian Jacqueline Lo identifies, older artists like John Young, Lindy Lee and William Yang tend to be regarded as the first wave of Chinese-Australian artists, given they began their careers at a time when the White Australia policy was still in place.1 Lo further observes that their works are ‘subsumed under simplistic identity discourses of hybridity and fusion.’2 While the trauma and suffering of the diaspora is valid, it often comes at the expense of a nuanced and critical deconstruction of the Asian-Australian position. Part of the ubiquity of this narrative may be attributed to the pressure of catering to the Western gaze, in which gaining access to institutional space often means performing a certain type of diasporic trauma.

Nguyen moves away from these formulations and presents a new dialogue, one which deconstructs the binary of a white and Indigenous Australia. This binary logic of an Anglo-Australian majority against an Indigenous minority has created a bifurcation of Australia’s cultural narrative, one which leaves Asian-Australians and immigrants widely uninformed and invisible. Through opening up a new space amongst this dichotomy, Nguyen eschews the expectant white gaze.

But ‘Portion 53’ is also complicating the binary logic of East against West, a binary seemingly internalised by many Asian-Australians, which reinscribes the collective amnesia and ignorance around Indigenous sovereignty. That is, in centering our experiences of displacement, we unknowingly and unwittingly supplant others. In one scene, Nguyen’s mother—Kim Dung Nguyen—recites a poem she has written addressing the Dharawal/Tharawal community, acknowledging that ‘33 years since your removal, my family came…housed on this patch, of your beloved soil.’ Her quiet, incisive observation acknowledges the dialogue between Indigenous and Asian communities, subverting the prevalent black-white partitioning of race relations. 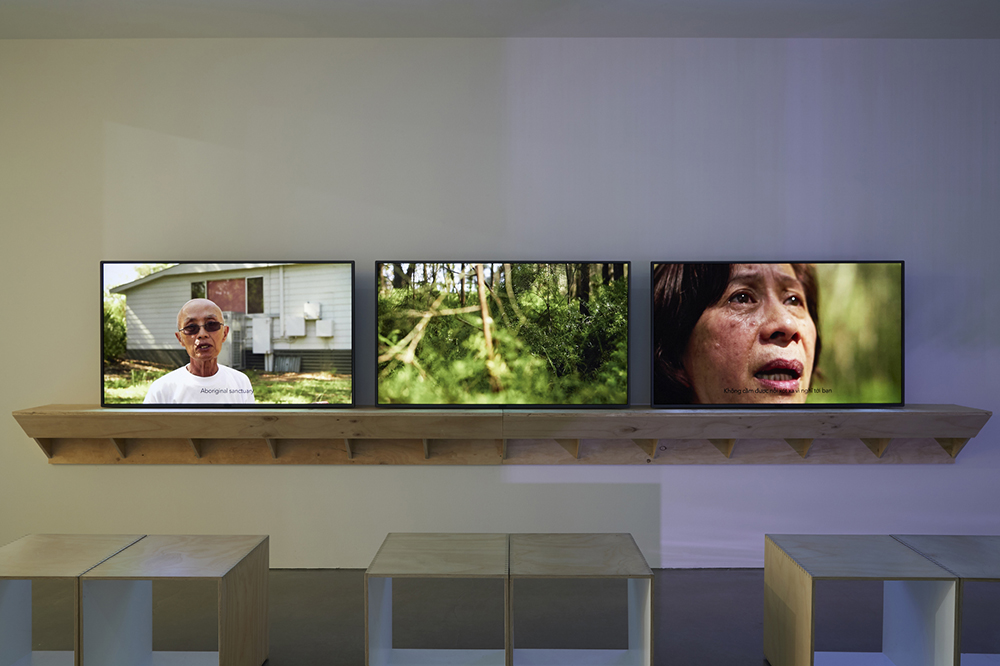 Nguyen’s formation of a new dialogical space encourages Asian-Australians, and diasporic individuals at large, to confront their role and complicity as settlers on Indigenous land, while also problematising the politics and poetics of diaspora. As Nguyen’s mother ruminates, ‘how easy is it then, to be erased’, drawing parallels between her own experiences of marginalisation as a refugee, and the erasure faced by Indigenous communities. And yet she does not equate Indigenous and immigrant experiences, recognising that ‘my new life, owes much to your ancestors.’ In constructing such a narrative, ‘Portion 53’ invites more critical (and familial) discussions on the types of experiences Asian-Australians reject, replace or marginalise.3 This becomes evident in the way Nguyen’s parents reflect on their journey to Australia, an account that reveals how often Australia is sold to migrants and refugees as a tabula rasa: a new form of terra nullius. This erasure of lateral connections creates an erroneous conception of an idealised land of milk and honey. Yet, the diasporic experience tends to be equated with the impossibility of belonging and identifying. This discomfort originates and culminates in the fact that, for all that it tries to appear otherwise, this landscape is not a blank state.

Nguyen’s work reveals the continuing merit in discussing identity in art, as hidden narratives, interactions and relationships continuously emerge. ‘Portion 53’ counters what several critics claim is a weakness in this year’s curation of The National—too many works using ‘identity as a prop.’ Nguyen avoids these charges, instead perpetuating a polythetic, fractured Asian-Australian identity.

Looking back on those discarded Styrofoam cups, I realise they represent a responsibility disregarded and overlooked. My family and I do not belong in so-called ‘Australia’, but we are still paradoxically entangled. Our attempts to assimilate, to conform, to be anodyne, to be submissive are impossible. Our presence on this land is political and we must begin to clear the litter we have left. We too must give thanks.