Independent Curating // Challenges, Concepts + Collabs was developed to share real-life experiences from a variety of independent curators, based in both Sydney and Melbourne, with an audience of curatorial students, emerging curators and other interested parties. Panellists included: Tahjee Moar, Tian Zhang, Kōtare, Sebastian Henry-Jones, Maeve Parker, Consuelo Cavaniglia, Andy Butler and Talia Smith. This full-day symposium was held at Verge Gallery on Friday 10 May 2019 and was facilitated by Nanette Orly.

Five years ago, I moved to Sydney with no arts experience, save for an acceptance letter, in order to begin my postgraduate degree in curating. During this time I actively pursued connections and opportunities to supplement my education in the arts because, quite frankly, the education I did receive didn’t provide me with the practical knowledge on how to get my first project off the ground—I learnt this through my peers. 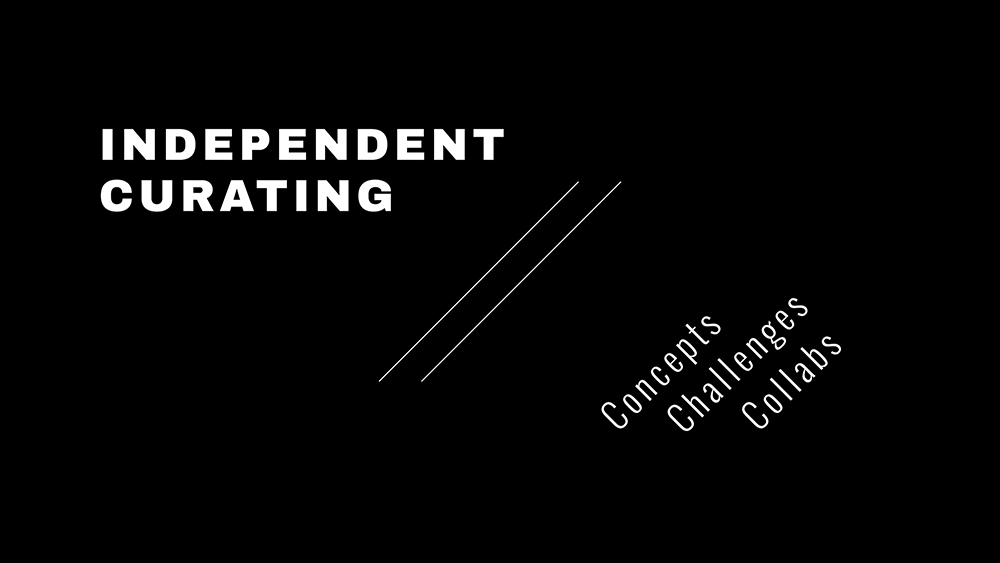 The concepts around contemporary curatorial practice within my own degree only deviated from a eurocentric point of view in two units: Contemporary Indigenous Art and Visual Arts in the Asia Pacific. To the detriment of the course structure, these two units were electives only. When programming the series of three panels for this symposium, having Tian Zhang and Tahjee Moar speak on the ‘Concepts’ panel was important, particularly when highlighting the necessity of inclusive curating, which I feel should be at the forefront of curatorial studies today.

Within an independent context, curators who identify as Indigenous or culturally diverse can genuinely advocate for and promote artists with similar backgrounds. Since 2014, when Tahjee co-curated the publication Blak Wave, she has noticed a stronger community of First Nations practitioners, artists, writers and curators develop within cities, regional areas and across Australia in a more nuanced and experimental way.

‘Having that strong connection is particularly important and also great to see the support we give each other…even travelling to each other’s events in other cities’—Tahjee Moar.

Curating outside of an institutional framework can lead to more provocative conversations and can be a great space to test out new ideas. Identity is being used as a single concept for shows at an institutional level, but this kind of curation doesn’t allow for criticality—just having a curatorial premise for a show about identity isn’t enough anymore.

‘Shows about identity are used to justify working with diverse artists. There are so many shows with culturally diverse artists dealing with their identity. We need a more complex conversation about who we are’—Tian Zhang.

Tian and Tahjee, directors of Firstdraft in Sydney, list some tips on how to put together a strong curatorial proposal:

1. Submit a strong conceptual framework and outline why you’re doing this exhibition.
2. Use simple, clear language rather than academic language.
3. Include strong documentation eg. high res images and working video links (for curatorial purposes you can submit your proposed artists documentation to show the assessors the kind of work or practices you wish to support).
4. Have letters of support especially if you’re working with Aboriginal or CALD artists and communities.
5. If you do not identify as Indigenous and are wanting to work with Aboriginal artists, ask yourself why do you want to work with Aboriginal artists/communities?
6. Think about how your artworks may be perpetuating inequalities.
7. If the curatorial concept is strong, you can hand in proposals that aren’t fully formed ie. awaiting some artist confirmations (but remember that you’re up against other applications where concepts, artists and selected works are locked in).

Collaborations are becoming increasingly favourable, with a distinct shift away from the ‘uber’ curator to more community focused and supportive models of curating. Given that such a model also allows for the pooling of resources to produce larger curatorial projects, collaborations between curators can be more enticing and productive. For Sebastian Henry-Jones and Maeve Parker, the curatorial duo behind Desire Lines, collaboration has become intuitive over three years working together.

‘Collaboration isn’t a division of labour nor a burden. We share responsibilities depending on what’s going on in our lives at the time. It’s being able to say: if you’re having a tough time emotionally right now, it’s okay, I can do all the emails!’—Maeve Parker.

Kōtare has worked in a collaborative manner with friends, artists and cultural communities in curating experimental club nights that bring together music, performance and visual art.

By not being seen as a curator in a traditional sense of the word—restricted by deadlines and bureaucracy—Kōtare is able to observe and patiently wait for the right moment to bring together a community of people through music, dance and art.

‘People who are into similar things will cluster together, which is quite profound—this is where culture comes from—it’s a very human reaction.’—Kōtare.

Today, curating is more than just making exhibitions. It’s about working with your fellow peers, coming up with non-traditional concepts of art making, shedding light on underrepresented voices, and bringing different groups of people together who may not have met before.

‘Desire Lines is all about building relationships between artists, which has resulted in many performances sustaining life after a Desire Lines event—that’s one of our biggest goals’—Sebastian Henry-Jones.

The challenges for independent practice mostly revolve around money. The lack of funding or grants available for first-time or emerging curators needs to be addressed (sometimes all you need is $2000 not $10K!!) but there are some options. Consuelo Cavaniglia, Talia Smith and Andy Butler were able to share some crucial tips on grant application writing and budgets:

1. Come up with a clear and concise project outline with a budget that reflects this.
2. Budgets need to directly correlate with project outcomes and who is getting paid.
3. Your budget also needs to balance!
4. Writing budgets allows you to take stock of what things you have available.
5. In-kind support needs to be included eg. free venue hire or marketing from venue.
6. Never ask for 100% of the cost of a project—a funding body will not approve this.
7. Get someone else to read your application so it is clear.
8. Ask for support letters in advance so you don’t stress the people who support you.

‘Why this, why me, why now? Asking these three questions of yourself is important anyway, to learn why you do, what you do and to convey this to other people…so when grant application deadlines do come up you can answer these questions’—Andy Butler.

But hey, it is very, very, very competitive. Pick and choose your battles, and really think about why the state or federal government should give you money for your project. You don’t necessarily need to ask for funding if you’re curating a modest-sized project. Have open and honest communication with your artists as well. If there is no artist fee to accommodate new work, request an existing work.

‘Your attitude to rejection is an important one to consider…three rejections a year is nothing…of course, there is a little hurt every time but pick yourself up and at some stage someone will say ‘yes’ and that yes will carry you forward for quite a while.’—Consuelo Cavaniglia.

‘Going into an already established institution which run on models (especially if you are a person of colour) that aren’t for you, is especially difficult. But, it’s okay to want to be an institutional curator, do a small stint in there to enact some change for the amount of time you are there.’—Talia Smith.

Independent curating can be perceived as secondary to institutional curating. I reject this notion entirely, and would like to also highlight that independent curating is still limited by bureaucracy. We are governed by financial limitations, competing application deadlines and rejections—just like institutional curators—but in the end, we have the freedom to curate shows that have the potential to be more respectful, experimental, sophisticated, educational, conceptual, and political than those presented within institutions.

I would like to acknowledge the Gadigal people of the Eora Nation upon whose ancestral lands this symposium was held and of the land I live and work upon. I pay my respects to Aboriginal Elders past, present and emerging, and extend this acknowledgement to any Aboriginal and Torres Strait Islander people reading this piece today.

Special thank you to all my curatorial contributors; Tahjee Moar, Tian Zhang, Kōtare, Desire Lines, Consuelo Cavaniglia, Andy Butler and Talia Smith. I wish to acknowledge Maya Kilic, Melissa Ya, Verge Gallery and Running Dog who all supported this project in their own ways. And as always, thank you to my community of artists, writers and curators that inspire and challenge me every day.