Nightclubs are places, but they are also ideas. For 50 Cent, ‘the club’ is the logical nexus of hedonism and capitalism (You can find me in the club/ bottle full of bub). Kendrick thinks it’s a bad habit (Don’t say I didn’t tithe for you/ or push the club to the side for you).

But before people talked about ‘the club’, they talked about a club: Paradise Garage, a multi-storey car park at 48 King Street Manhattan, the former kingdom of Larry Levan. Between 1977 and 1987, the superstar African-American DJ mined disco, soul and funk tracks like Gwen Guthrie’s ‘It Should Have Been You’ and Class Action’s ‘Weekend’ for maximum dancefloor impact. He helped usher in house music. He also created a refuge for Black, Latino and LGBTQI communities. Like Jeff Simmons in Wu Tsang’s Into A Space of Love (2018)—the lifelong clubber who dances ecstatically from dusk until dawn in a cloud of candy-coloured balloons—the Garage achieved, probably for the first time in history, the idea of the club as a portal to pure bodily freedom. The kind of place where you could spin and bounce and do the electric slide until the sun came up, without having to answer to the cops that lurked outside, or justify the ways you moved through the world. 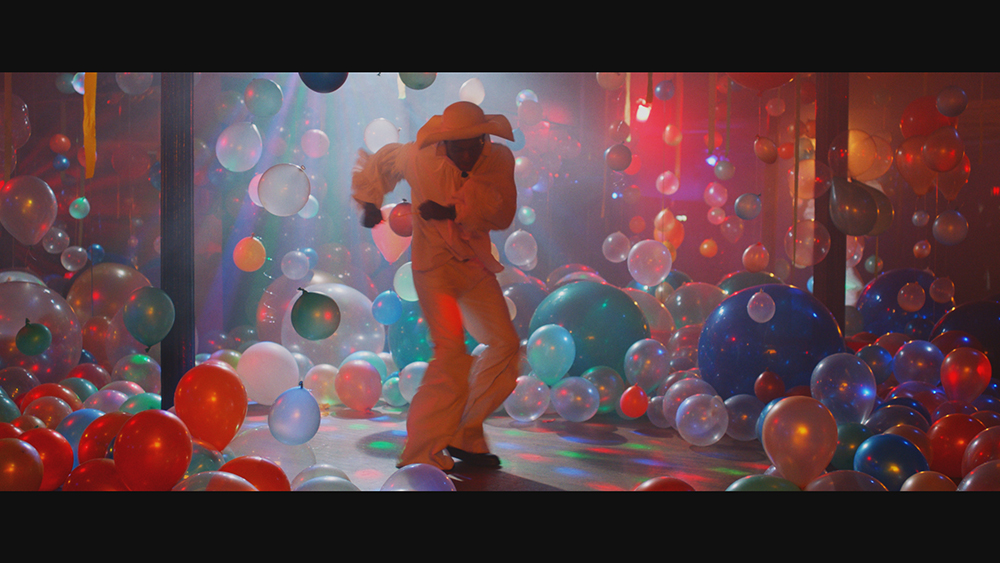 Wu Tsang, Into a Space of Love (2018), film still.
Image courtesy the Artist

Kia LaBeija’s shoulders exert their own gravity. In Into A Space of Love, they shimmy backwards and forwards as she dips and duckwalks towards the camera. They jut up and down while she straddles a deckchair, and contort into improbable positions when she catwalks down an alley. Her limbs move in time to a relentless rhythm imperceptible to mortal ears.

Before vogueing recalled Malcolm McLaren or Madonna in a tuxedo, it belonged to the drag balls of 1920s Harlem and New York’s outer boroughs in the 1980s: spaces where trans people of colour, often ostracised by their blood relatives, would ‘walk’ to represent their chosen family or ‘house.’ LaBeija is the mother of House of LaBeija, the legendary house founded in 1977 by Crystal LaBeija.  The 28-year old, queer photographer, who was born HIV positive to an untested mother, made her debut as a LeBeija at the 2012 Latex Ball, the world’s largest ballroom gathering. She uses her body and camera to defy a culture that erases the voices of women like her. ‘Doing more than is necessary with less than you need. This has been the cultural legacy of so many oppressed and minority groups in America,’ writes Zadie Smith in Feel Free, on Mark Bradford’s 2005 video ‘Niagara’. At first, LaBeija’s vogueing seems like the sum of simple movements. But, like all good artists, she makes the difficult look much easier than it is.

Back in 2009, Jazmin Venus Soto, a Washington Heights DJ with a Dominican mother and an Ecuadorian father started a series of underground parties called Ghetto Gothic (later GHE20G0TH1K) with her friend Shayne Oliver, the designer behind fashion label Hood By Air.

For a handful of years, club kids from every cultural background would convene in empty Brooklyn warehouses to dance to dark rap, nu-metal, ballroom, trap, industrial and dancehall, interrupted by dispatches from Al Jazeera. This strange and specific mashup of music and references felt like the soundtrack to the end of the world—or a way to imagine the future.

Soon, the party’s aesthetic started appearing on style blogs and runway shows. By 2014, Rihanna was wearing chokers and green lipstick. At the 2017 Venice Biennale, Faust, by the German artist Anne Imhof, saw zombie-faced performers wearing black Adidas with Dobermans mill around a stage littered with chains and leather mattresses.

‘How we dance, how we inflect our voices is just a testament to survival,’ says Venus X, whose voice anchors Into A Space of Love, wearing Harajuku pigtails and a red pleather blouse. ‘All that survival, somebody wants to make money out of it. Someone wants to be in proximity to it because it makes them feel cool.’ She glares at the camera before cracking a wry smile. ‘The currency of your pain makes someone else with privilege feel validated. Isn’t that some shit?’