‘Why cover the same ground again?…It goes against my grain to repeat a tale told once, and told so clearly.’
Homer, The Odyssey

‘It is half the art of storytelling to keep a story free from explanation as one reproduces it.’
Walter Benjamin, The Storyteller, (1936)

I’m not going to tell you about the Hatell Aquereum or Sweet Umbria or Mars Utopia. I’m not going to tell you about Fauramondo or Babaluey or Brainiac. I’ll leave those stories to Skye Saxon, otherwise known as Skye Fox, otherwise known as Katerina the Steampunk Ringmaster. For now, let’s call her Skye Fox, and for now let’s say she is the holder of the keys, she is the master of the circus and she is a traveller between worlds. She also knows how to use her hands—how to paint a picture with paint, how to make a doll with cloth, how to map the trajectory of a poison dart with a single well-maintained fingernail. She knows how to use her hands to articulate stories that deserve the accolade of epic.

At the opening of Oddysee I meet the mother of Skye Fox and we speak for some time, standing in the circus, in front of the soft sculptures Skye Fox calls dollies, and beside the video projection of Skye Fox recounting their escapades. Not surprisingly, Skye Fox’s mother’s favourite dolly is Sugar Mama. Skye Fox’s twin sister’s favourite dolly is Fauramondo the DJ Cat Fish. When they were little, Skye Fox and her twin sister used to talk to each other in their own made up language, pretending to be mice. Their hands would do a lot of the talking. Kristel shows me how, although she can’t remember the exact words they would use. 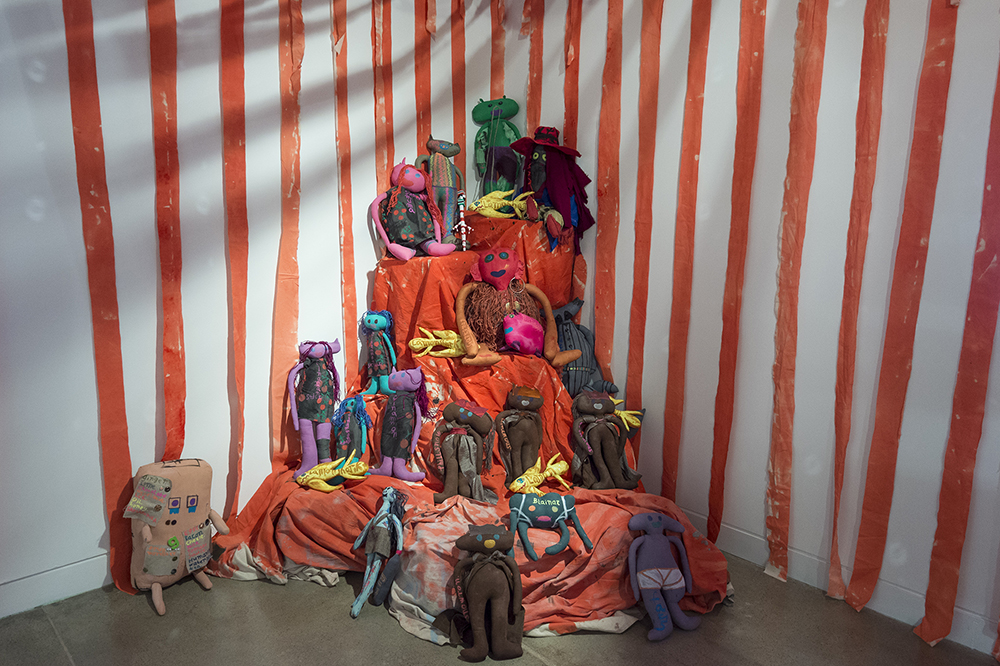 My favourite dolly is Hank Octomon the dark mage and octopus. I pick him up and run my hands along his calico body, knocking a Lemon Shark off its fabric draped mountain in the process. [FYI Lemon Sharks don’t wear underpants, although I wouldn’t have known that if Skye Fox hadn’t whispered it to me gleefully a little while earlier.] I run my hands along Hank Octoman’s green pants and think about finding him washed up on a beach, seagulls pecking, waves lashing and gashing. Skye Fox saved him from a certain demise. Now she’s always welcome to stay at the Hatell Aquereum, which he built.

At the opening of Oddysee I pose for a photo with Katerina the Steampunk Ringmaster in which I am wearing her hat and holding her whip. I forget to give her whip back for a few minutes. I like the feel of the worked leather, and the feel of being someone else, someone who holds a whip at an opening.

Much earlier, back at Studio A, where Skye Fox makes most of her work, I ask her what she would say if she could tell people why seeing her Oddysee is important.  She has to think for quite a while.
I don’t know that there’s just one thing I would tell them. There’s lots of things…
She pauses again. This time she starts and doesn’t stop for quite a while, not really drawing breath.

If being yourself doesn’t work out, don’t be yourself, be someone else. If that other person helps you get through the day, be them, even if it’s for just that one day. If not, and they don’t exactly work out, change that character and be someone else.

You might be surprised and you’ll be someone or other you haven’t thought about in years. Or they might kick your butt. 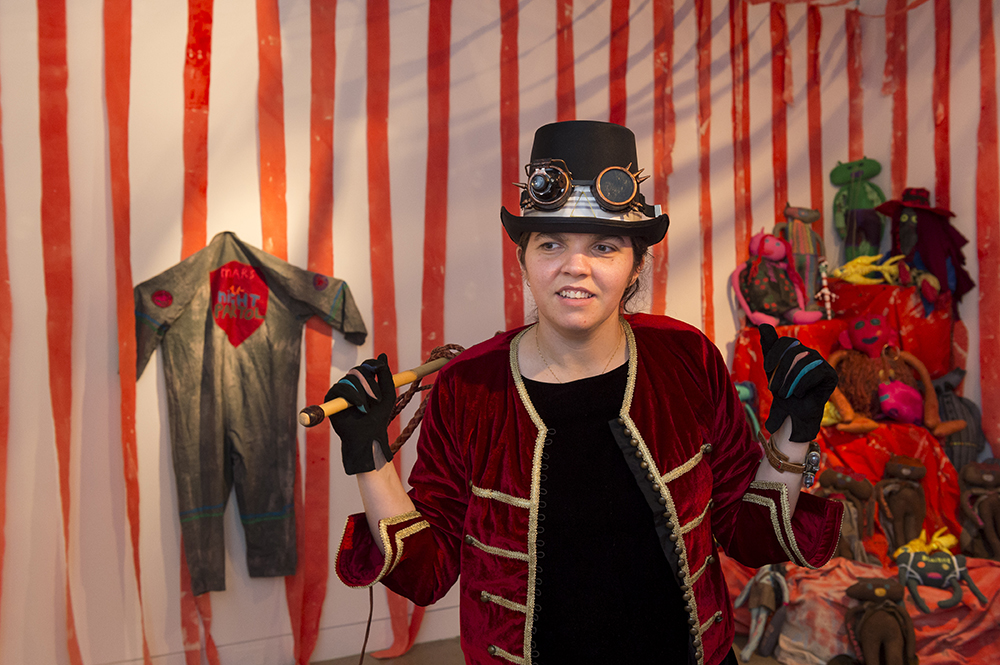 What this all means is I’m not sure where the stories start and end, because the ones told in the video in the circus in the white cube in the inner city art gallery are just one telling of the stories I’ve heard in fragments while waiting for paint to dry, or for the pasta with special sauce to get dished out and tallied up at the café around the corner.

When I ask Skye Fox again—where were we? what were we doing?—why she wants to share her characters with the world, she answers straight away: It’s a way of expressing what you can’t say in just ordinary words. I know what she means. And it really is something extraordinary.