This piece was developed during Chloe’s writing residency at Carriageworks as part of No Show (12 Feb-7 March). Chloe has spent a lot of time hanging out at Studio A over the past couple of years as part of her PhD research. This work responds to Skye Saxon’s most recent mystical installation.

What should the title be Madame Witch?
It’ll come to you. Everything always does.

It is an overcast afternoon. Outside, puddles on the ground reflect sky. We are inside a former railway yard turned multi-arts precinct, in one section of a smaller structure made from steel beams and felt panels. The structure is temporarily housing the work of eleven different artist-led initiatives from across NSW.  Today, the artist Skye Saxon is Madame Witch. She has been reading tarot for visitors from cards she has made herself, but is taking a momentary break from her work.

Madame Witch leans her elbows on the frame of the window separating her space from mine. Her emerald-green hat sits abandoned next to her tent. The hat covers everything but the legs of her familiar, My, who is a cat but also a character from the Moomin series. I can just make out twenty jewel-like cards pinned to the wall behind Madame Witch and to her right.

I am here to write about her and her art. I want her to help me write. She’s not forthcoming with a title, but that’s OK. I try a different tack.

How would you start?
I usually start by complimenting them on what they’re wearing, or something like that. I ask them if they’d like a reading.

I compliment Madame Witch on her outfit. She is wearing her hat, plus a bright yellow knitted scarf, and an olive-green tunic. I ask if she’ll give me a reading. She agrees. I sit down on a snowflake on a pillow on polished concrete floor with small flecks of stone and a crack running through it all the way out past Matthew Calandra’s drawing-in-progress of Madame Witch in her abandoned castle in the middle of a forest. The snowflake on my pillow has eight wonky diamonds cut into white cloth. Its radiating dendrites are painted blue and grey. It is flecked with stitches in silver thread. Skye Saxon has made many a snowflake in her time—Did you know every snowflake is different?

I’m in your hands.
You’ll have to sanitise first.

We laugh. I sanitise, shuffle. She selects the cards and places them one after another on the grey box between us.

You were The Tower.
You are The Serpent.
You want The Fool.
But what you get is The Hermit.

What does that mean?
You’ll soon find out.

During my time at Carriageworks, I follow Madame Witch around, and ask her questions, and watch other people have their tarot read, and ask them questions.

Madame Witch is used to me doing this because I have done something similar at Studio A. There, she likes to go by Skye Fox and creates all kinds of weird and wonderful things in the company of other artists, some with and some without disability. There, on the fourth floor of the Crows Nest Community Centre, looking out past a Jacaranda and a church to a mini metropolis, a different kind of magic happens.

Once, I asked Skye to talk me through her creative process.

I’m not sure what that word means: process.
Well, how do you go from an idea to an exhibition?
It’s like having a cartoon light bulb above your head, that flickers on and off every time… well…a bit like morse code.
It’s like reading a book upside down and back to front.
It’s like grabbing a needle and thread, pulling it out from your head and starting to sew it all together.
It’s like kicking an old thought bubble and seeing what happens.
What would happen?
It would come to life.
It’s like if you 3D-printed my head, cut little holes in it, and then you could see what was happening inside.
It’s for everyone I know who can’t see inside my head.
And it feels…It feels…it feels like face-planting into a giant marshmallow.

At Carriageworks, lots of people tell us that Madame Witch has told them something meaningful about themselves or their lives.

I find out that Madame Witch takes direction from the cards, but she also reads peoples’ faces.

How do you read peoples’ faces?
It’s a combination of the facial expressions, the colours, everything.

An invigilator chimes in: ‘Oh, so you read the auras as well? You do quite a bit then!’

In my humble opinion, the best thing about Madame Witch’s tarot reading is not the quasi-psychic insights she provides but the chance to hear what each of her drawings mean. What they mean for you, in her humble opinion.

Madame Witch gives the Tarot her own special twist. My favourite is The Flying Fox—her version of The Hanged Man. In some interpretations this card depicts the Norse god Odin, who hung himself from the tree of life for nine days and nine nights. He wanted to know about other worlds. He wanted to understand the runes. Madame Witch says of The Flying Fox: It could be telling you that you need to see the world from a different point of view, upside down in this case.

But I didn’t get the Flying Fox.

You were The Tower
A chance to escape
A ladder to climb down
Don’t be afraid to use the back door
Or your secret, special key 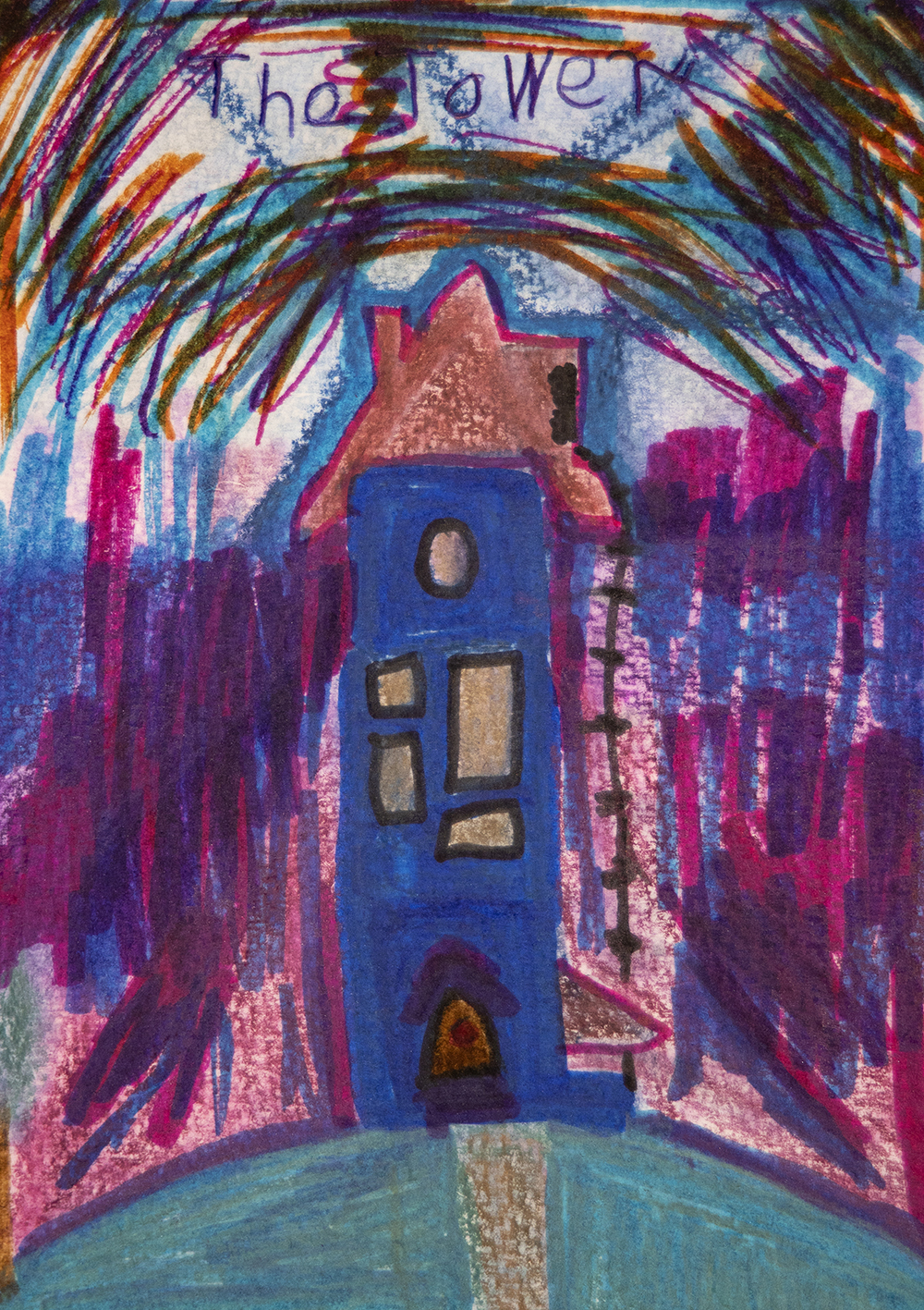 Madame Witch (Skye Saxon), The Tower (2020)
Image courtesy the artist and Studio A

Madame Witch joins me in the Running Dog room. We stand by the big glass doors and look out at the people forming a line labelled ‘audience’.

For some reason, as we stand, Madame Witch tells me she couldn’t keep up with what the teacher used to say at school, so she wrote everything really small.

Which reminds me, did I tell you about the tent yet? It is made from a white parachute and it is hanging from the ceiling in Madame Witch’s castle. All around its pointed tip are spells, and the stories of magical peoples’ lives. But they are in a writing that no ordinary person could ever understand.

In a tepee in a Kandos pine forest back in 2017, Skye Saxon became a Snowflake Shaman, relieving visitors of whatever was bugging them. I shouted into the heavens telling things to go away and never come back, she remembers.

A couple of years later, in a white cube in an inner-city art gallery, Skye Saxon became Katerina the Steampunk Ringmaster, and some torn strips of red fabric formed the edges of her circus tent. But I’ve written about that elsewhere. 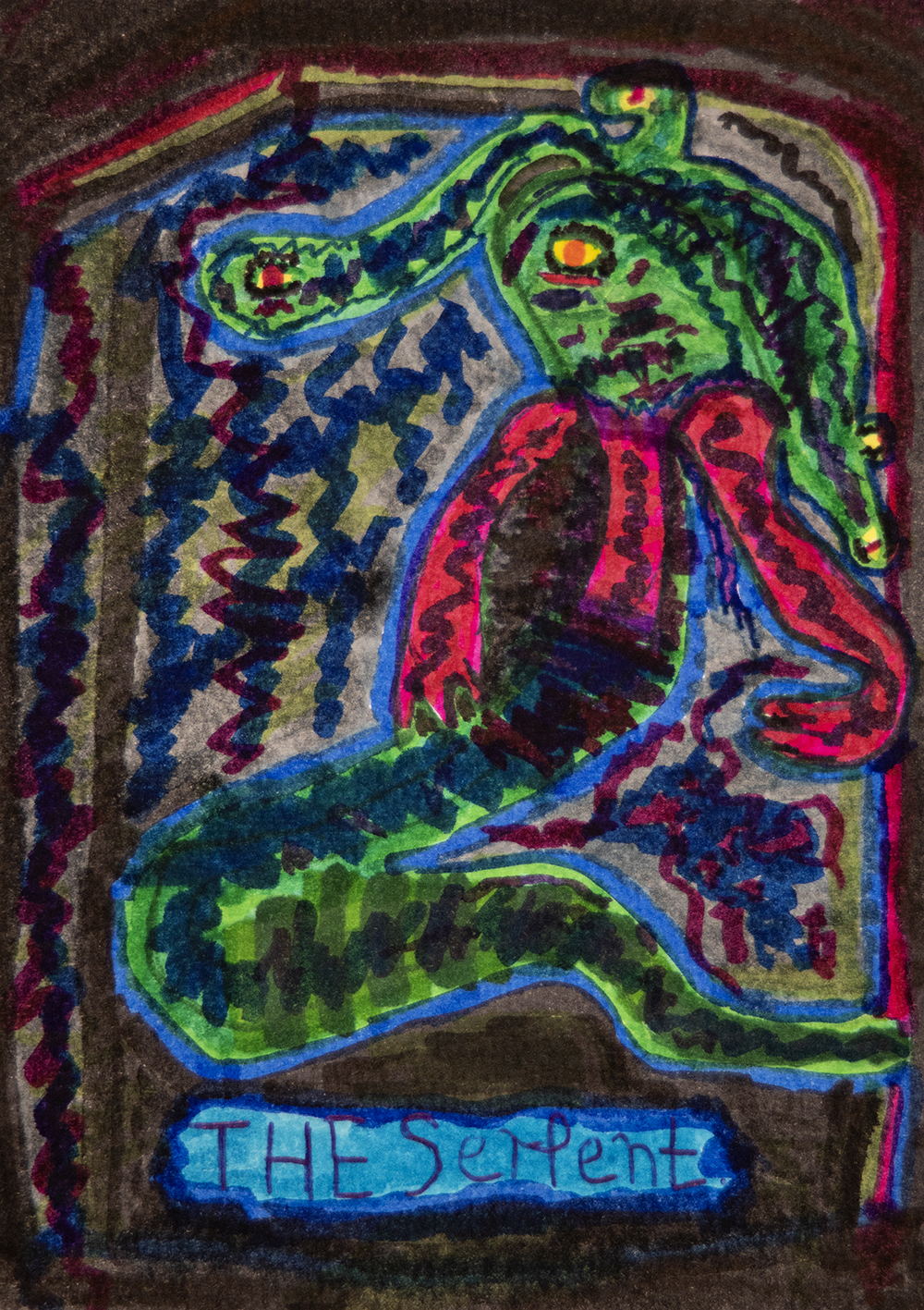 Madame Witch (Skye Saxon), The Serpent (2020)
Image courtesy the artist and Studio A

At Carriageworks, I have brought with me a few books that I’ve barely read. One is called The Snake Book: A Breathtaking Study of Beautiful Snakes from Around the World. I use it to hide printed sheets of paper.

Another is called Louise Bourgeoise: Drawings and Observations. There’s a drawing in this book that looks a bit like two witches’ hats, one upside down and almost touching the other. Bourgeoise called them spirals and wrote: ‘This is the toi and the moi. You see, the spirals seem to be isolated. They exist only through the fact that they are reaching.’

Madame Witch reads the tarot of another witch who has been casting cyborg spells using the power of code and computer speech recognition.

Madame Witch reads the tarot of another artist who has invented a stable of fictional artists who make fictional work that she sends out into the world via her equally fictional agent. 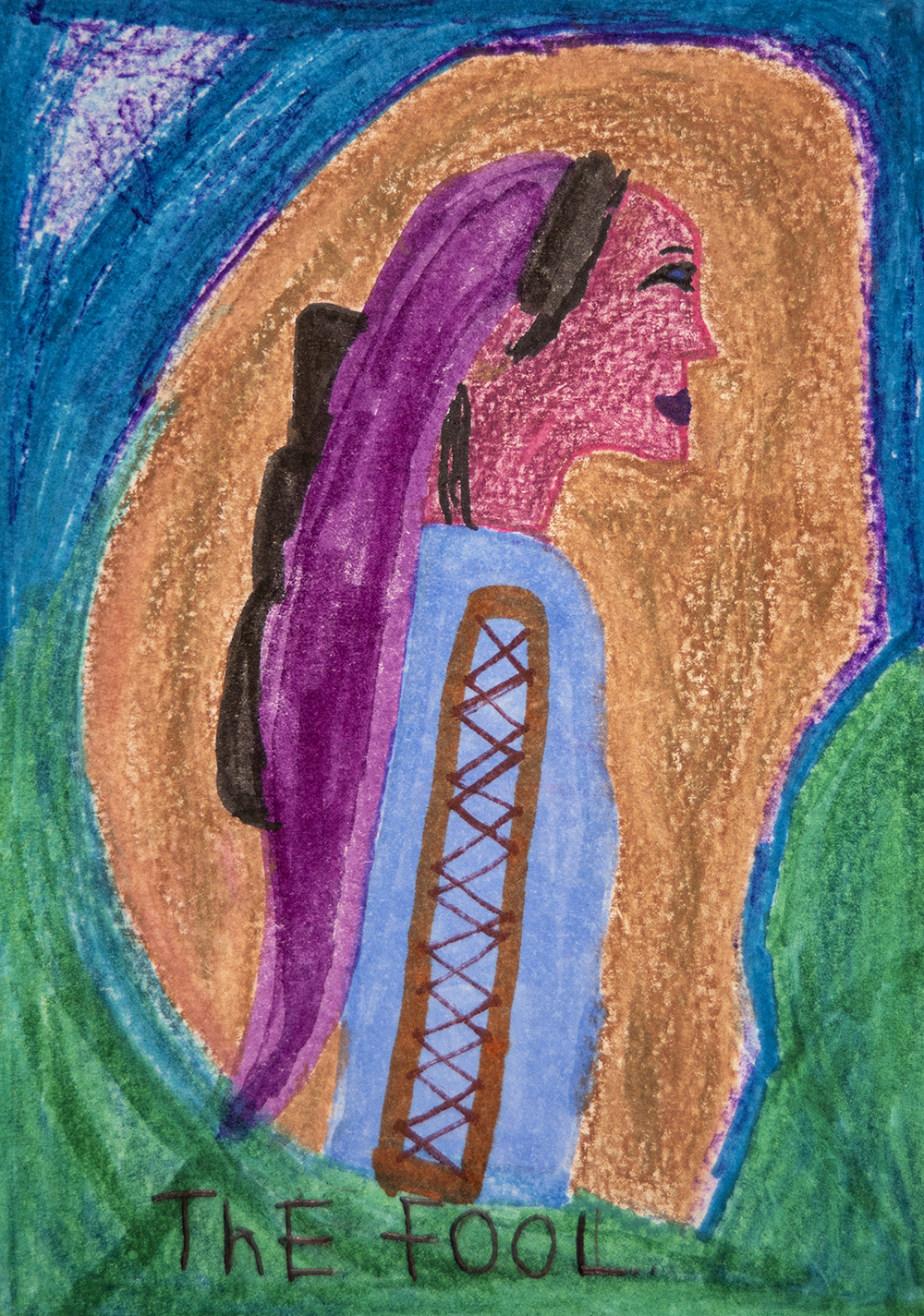 Madame Witch (Skye Saxon), The Fool (2020)
Image courtesy the artist and Studio A

I visit Skye Saxon and her mother Karina at their home in Rouse Hill. It’s on a suburban street of neatly rendered townhouses, each almost-but-not-quite identical. In the small plot of garden out the front there are some maples and one brilliantly purple gerbera. Skye’s room is also small and also filled with treasures. For instance, there are plush foxes of all shapes and sizes, including a little stash of them that she reveals to me under the sheets of her neatly made bed. Out the back, eggplants and a barbecue and basil. Karina cuts me a big sprig to take home.

For some reason, of all the other things I take from my visit—not just the basil, but the photos, the words in my notebook and recorded on my phone—I keep returning to something Karina said.

Mine is always crooked.

Skye’s grandmother was very intuitive. She passed away at their home in Baulkham Hills, a big white house with two storeys. Skye’s mother Karina remembers cupboard doors opening and closing in the kitchen of their own accord. The back door leading into the yard would do the same. It was nothing to do with the breeze.

Skye’s grandfather was always interested in the idea of being between worlds. He had a book called Borderlands, filled with stories of people passing over between life and death. He died too young; not long after he had returned to painting. He made intricate Australian landscapes in a studio above their garage, accessed by a spiral staircase. Nobody was allowed in there without his permission. He had set up a system so that whenever he needed something, he rang a bell, and it would be delivered. Delivering a coffee one day, Karina told him he needed something in the foreground, and that the light wasn’t quite right. He ended up putting a fence in. She found herself invited back more regularly. I found this out because when I asked her if she is an artist too, she said no, more an art critic.

I kind of like hearing about the bell system. I’ve never done it myself, but I like it. If I had to do a system like that, I’d have it so the people downstairs would see a picture system. Something simple like I want this this this and this, made into this…while I’m working.

Skye points to imagined pictures in the air above us and I can almost see them. Chocolate, marshmallows, hot water, milk. 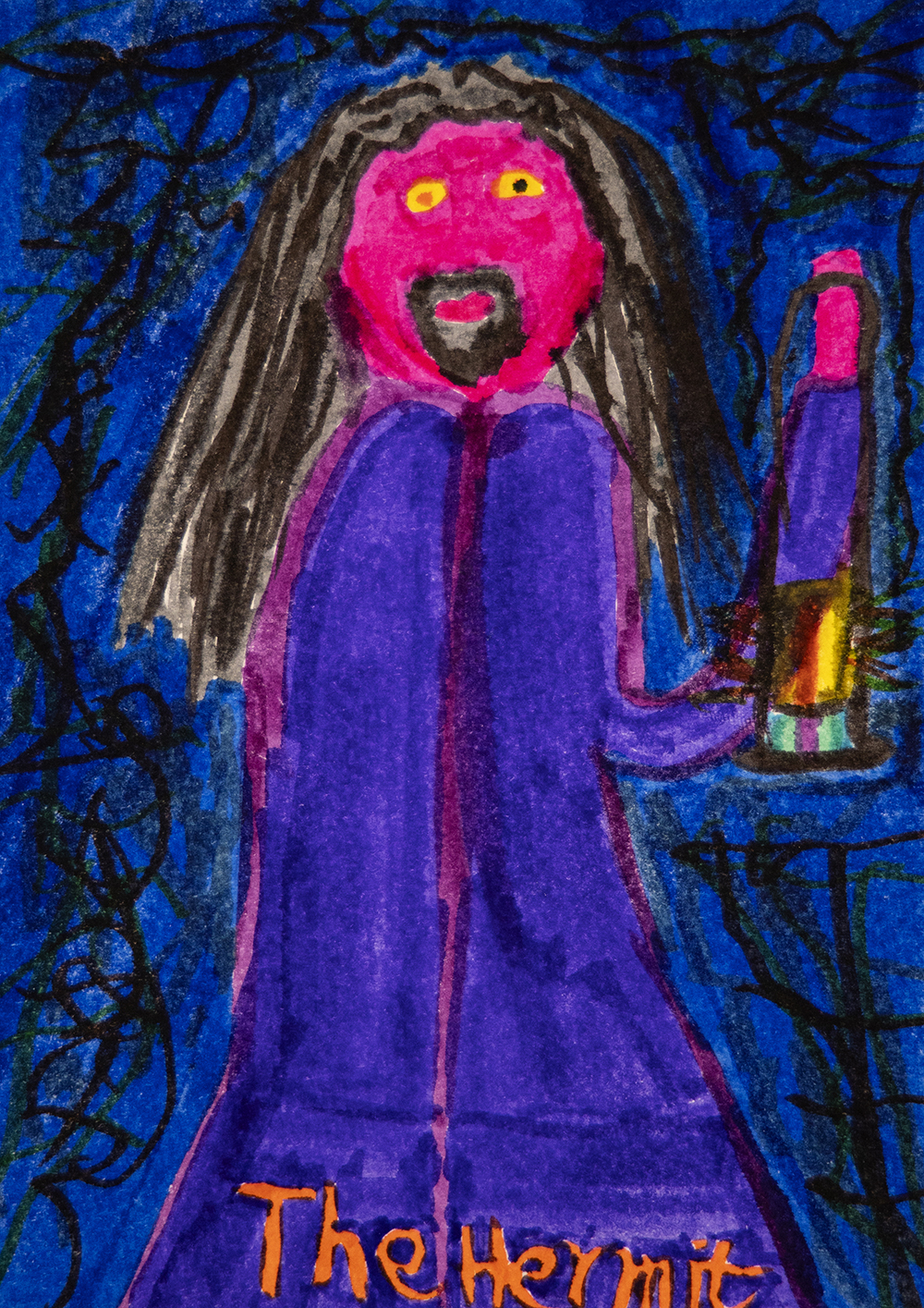 Madame Witch (Skye Saxon), The Hermit (2020)
Image courtesy the artist and Studio A

At some point we are sitting again at the long tables in front of the Carriageworks café eating custard tarts (Madame Witch has a sweet tooth that is quite contagious). She notices the big lanterns above the restaurant area.

I’d like to draw all over them. I would start in the lines, and then go sideways.
I wish I could draw, I say.
Writing is like a form of drawing.
But it doesn’t represent things in the same way.

Driving home from Madame Witch’s castle, someone on the radio is talking about clouds. About how clouds are like our emotions, they move between visibility and invisibility. About how a cloud forming in a blue sky is a bit like a thought forming in an absent mind. I think this may be relevant.

And perhaps this quote from John Berger is relevant too:

‘We who draw do so not only to make something observed visible to others, but also to accompany something invisible to its incalculable destination.’1

When I leave Skye Saxon’s house, basil in hand, she comes out onto the nature strip to see me off.

Bye! I hope I inspire you to write something magical. 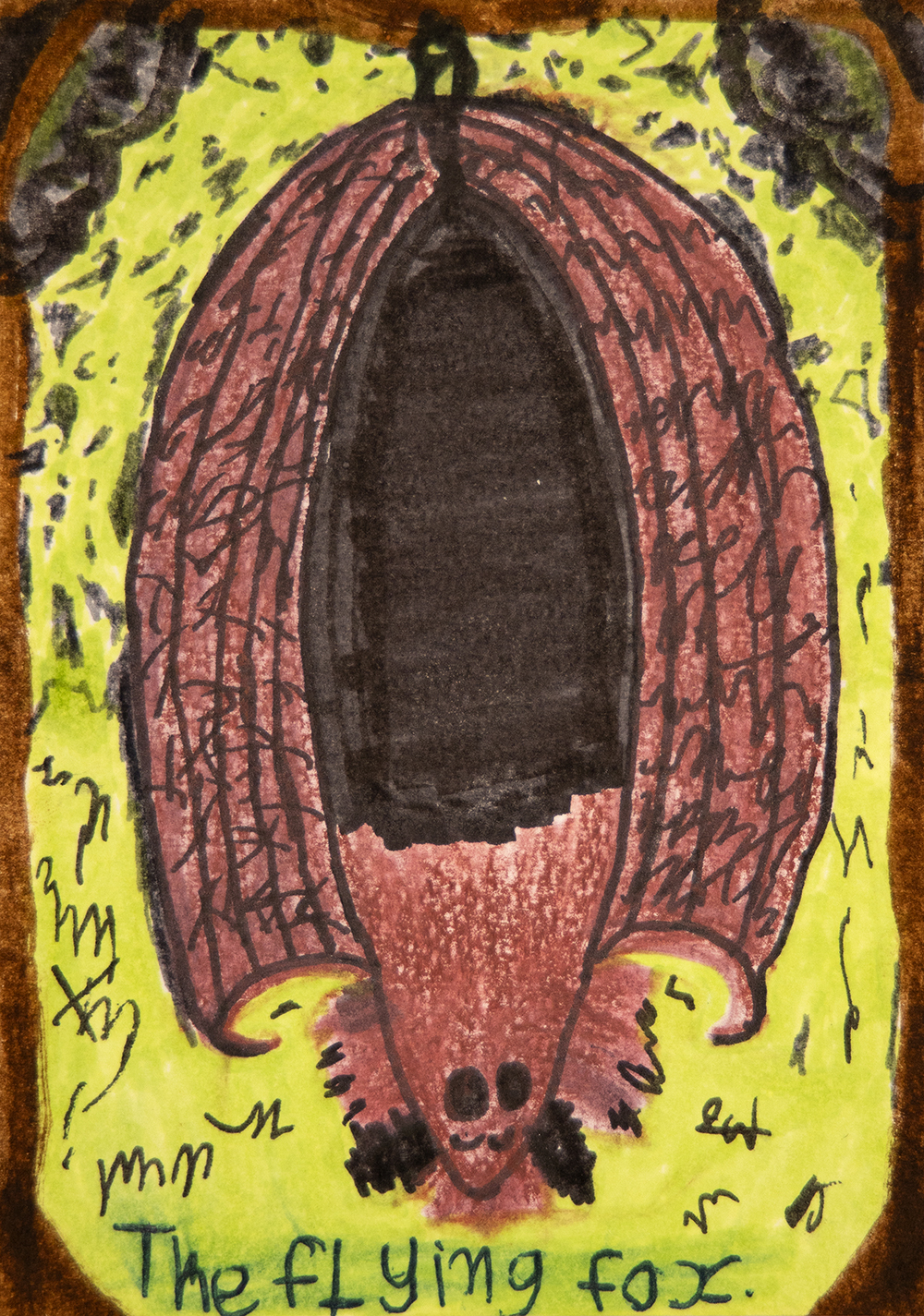