We started writing this piece a month ago on the Gadigal land of the Eora Nation, in a week where over seventy fires burned across (so called) New South Wales. We would like to extend our gratitude and acknowledgement to the insects, animals, plant life, waters, people and bodies of knowledge that have cared for and maintained this land long before settlers, and to those that will continue to do so. While the crisis is now being felt more directly in metropolitan areas, destruction of land has been a continual act of colonisation for more than 250 years. As we finish editing this piece, over one hundred and four fires continue to burn. It feels futile to talk about art now, at a time when it’s not business as usual. But these discussions do not exist in isolation.

The weather is commonly disregarded by some as an always external background. But, as Stella Maynard notes, ‘the weather is not an ‘out there’ phenomenon, [it] intersects with, and co-produces, material worlds.’ In the smoke thickened air, we consider the ways in which what is muffled and cloudy, visible and barely perceptible, can speak volumes.

We both share a curiosity for sound and the ways that, like atmospheres, it is an intangible, vibrational affective environment. Gail Priest and Thomas Burless’ A Continuous Self-Vibrating Region Of Intensities, presented as part of Liveworks 2019, is a composition of sculptural instruments and interactions designed to draw our attention to barely perceptible volumes.

Trained vocalists Carolyn Connors and Sonya Holowell, uniformed in lab coats, join Priest, utilising vocalisations to interact with the sculptures. Their rehearsed choreographies produce rippling pools of water and buzzing patterns of sugar on top of speaker dishes, translating the vibrations of sound into pictorial qualities—a phenomenon known as cymatics. The accompanying program suggests these performers will ‘sing these objects to life, enabling us to hear and see sound at the same time.’ Yet, such a dualism feels limiting in its binary. This preoccupation with the representation of sound ignores the ways that hearing, and voicing, are undeniably multi-modal. It cloaks the way sound is felt, sensed, or embodied, and punctured by affect, relations, and systems.1 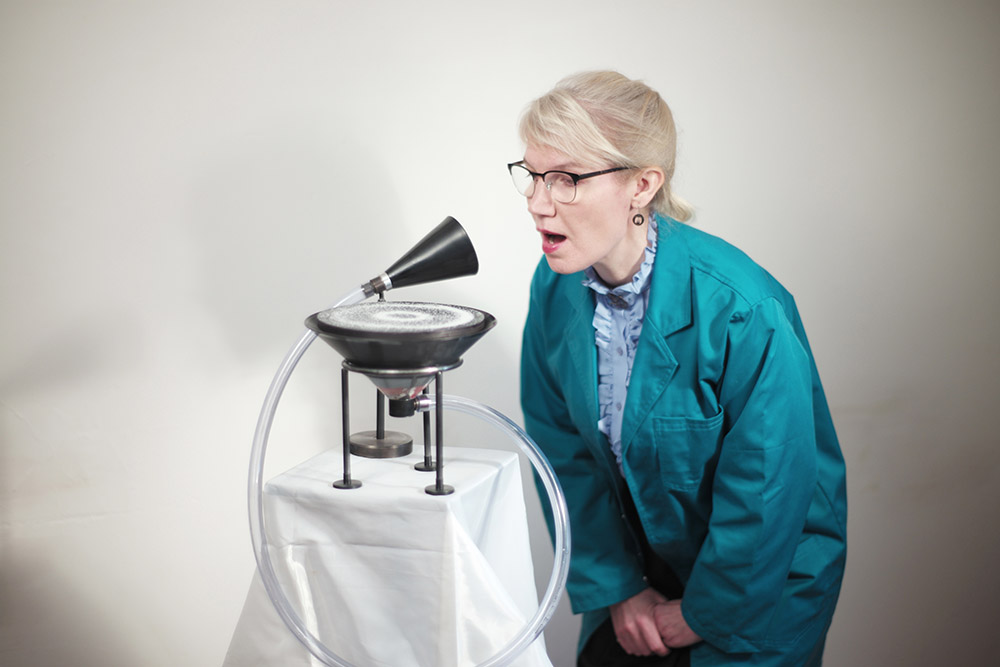 Gail Priest and Thomas Burless, A continuous self-vibrating region of intensities (2019)
As part of Liveworks 2019,
Image courtesy the artists

In 2017, the term Homogenitus was added to an official list of cloud formations—a new classification that specifies clouds resulting from human activity. We gaze at Contrails, dangerous ejections of carbon dioxide, which further trap thermal radiation and increase warming. They are an example of visual and sonic atmospheric markings and interruptions, regularly dismissed as background noise that passes without a visible trace.

After the performance, we discuss parallels between art-viewing and cloud-gazing. Both activities offer the sense that meaning isn’t linear or complete. Instead they propose the malleability of meaning making, and that meaning is so often felt. Both art-viewing and cloud-gazing can teach us the ways in which interpretation is a social practice, relational and embodied. Interpretation involves processes that are contradictory, or are ambiently affective, interfered with, and generatively interruptive. As we edit this piece, smoke cloaks the sky. There have been no clouds to gaze at.

Priest strikes the table with two silver tuning forks, objects designed to regulate pitch. As the forks meet the table, we witness this attempt to ‘sing these objects to life.’ Priest draws the forks up to frame a face, ear to ear. A subtle ring reverberates that only one individual can hear, a small and intimate rupture, a brief reminder of our implication as audience members in the structures of performance.

Undetectable at first, another performer lies flat atop a table, unnervingly still and covered by a thin sheet of purple plastic. Priest and Holowell sprinkle gold glitter over the performer’s cellophane covered mouth, their body emitting a low rasping hum. The hum is ‘an amassing of differences and differencings, a bundling of countless interruptive relations and noises into a thick yet moving fog.’2 We watch the glitter quiver, but the hum is more demanding.

The vocalist’s sinister whir brings to mind the irritable, persistent hum of fear and (eco)grief in this climate. It is a whir akin to the perpetual drone of mechanic vibrations inside a data centre. A place where colossal amounts of energy power hundreds of rack-mounted servers, all maintained with cooling units to sustain the ethereal cloud. The cloud is ensured not to overheat, while the rest of the world continues to warm.

The cloud, purposely obfuscated, is apprehended as immaterially everywhere and anywhere. Priest and Burless openly display the instruments of their performance, and the vocalists attempt to capture their song.

But sound refuses containment: it is murky, and leaky. We can understand the voice as that which is produced by its assembly line of respiratory-laryngeal-oral biological makeup, but it’s also important to consider the ways in which it’s further shaped and continually reshaped by cultural and oratorical codes. The mouth is a claggy passageway between public and private, between producing and consuming, as a site of speech, of sound, of eating, of intimacy, of gesture and expression. It hollows out, opens into and out from the body, like a pocket (assets, capital, to collect, or to steal). We exchange small talk pre-performance: how’s that weather?

Privileging sound’s aesthetics, Priest and Burless attempt to draw our attention to the commonly forgotten resonance of sound as micro, vibrating multi-taskings. The line ‘We Are All Oscillators’ is projected onto a screen, prompting us to consider how we are implicated in sound, both in and outside of the performance context. As Tom Melick observes, ‘maybe it is inevitable that we ignore what we are immersed in, whether it is atmospheres of air or affect or politics,’ ambient music or performance arts dynamics. Ignorance is often easier than recognising our involvement. Whether it be a hum or a whir, a cloud or a haze, how can we attune ourselves to the peripheries, and that which is reduced to background? How can we remind ourselves of the ways in which we are actively connected to, and vibrating in, sonic and geopolitical contexts? It begins with paying attention.